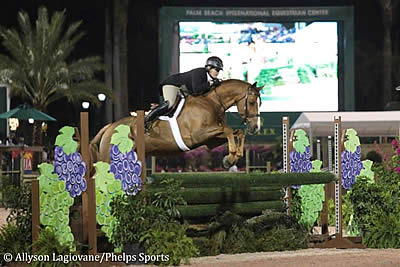 Wellington, Fla. – Feb. 18, 2019 – This past weekend, Victoria Colvin once again displayed why she is consistently at the top of the leaderboard in hunter competitions across the nation, claiming the $100,000 USHJA/WCHR Peter Wetherill Hunter Spectacular title at the Winter Equestrian Festival for the fifth time, this year aboard Brad Wolf’s Private Practice. After his shining debut year in the hunter ring, the flashy gelding was deservedly recognized as the best in hunter sport for the 2018 year earlier in the evening, when he was awarded the 2018 WCHR Hunter of the Year Award, after which he proved why he deserved the distinction by championing the highlight class. In a special awards ceremony before the main event, Colvin accompanied Private Practice’s owner Brad Wolf, who was presented with the prestigious Peter Wetherill Cup to celebrate the occasion.

“Winning this class four times as a junior rider was amazing, but winning it as a professional is very special to me. It is so perfect that Private Practice was given the WCHR Hunter of the Year Award earlier today and then we were able to prove why he really does deserve it,” commented Colvin. “We have already achieved so much and come so far in only one year together, and I think we still have a lot of success ahead of us. I can’t wait to see what else we are able to achieve.”

In Saturday night’s feature event, Colvin and the chestnut gelding bested a field of some of the country’s top hunter horses and riders, each having qualified for a slot in the night class by earning a champion or reserve champion title in weekly divisions at WEF. After finishing the classic round of riding in second position hot on the heels of Amanda Steege and Lafitte De Muze, Colvin and Private Practice made up ground with their signature high-scoring handy trip to surpass the early leaders and capture the overall title, adding yet another win to the duo’s quickly growing list.

Aptly named “Peter” in the barn, the gelding joins the ranks of only seven other horses to have received the distinction of a Peter Wetherill Cup recipient. He is joined by some of the United States’ most decorated hunter horses such as Dr. Betsee Parker’s Private Life, David Gochman’s Catch Me, Kensel LLC’s Mindful and Lynn Rice’s Gramercy Park.

In 2019, Private Practice will continue to make his mark on the hunter world, campaigning with Colvin in the professional divisions as well as derbies and his owner, Wolf, to top results in the Amateur-Owner Hunter divisions. Already shining as one of the top horses in the sport, Private Practice looks to have an even brighter future ahead of him as his experience grows.