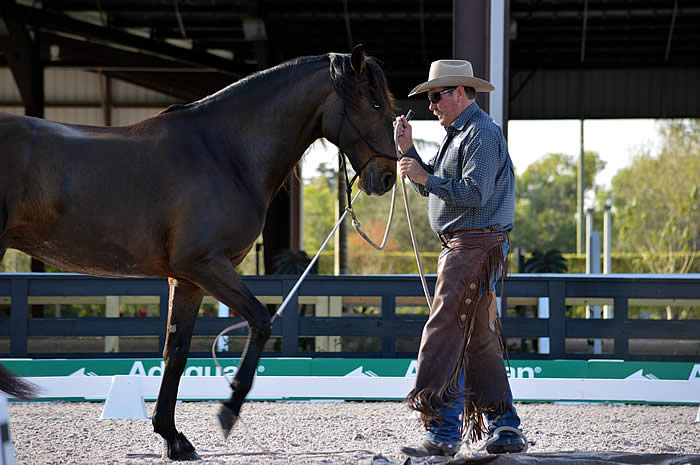 ‘WAZ’ Up at the Dressage Summit?

Wellington, FL (January 22, 2013) – When the 2010 World Equestrian Games entrusted its arenas to Premier Equestrian, LLC, it knew it was working with a company that respected the priority dressage puts on foundation work. Which is why the Sandy, Utah-based source for more than 1,000 high quality yet affordable equestrian products, including dressage arenas, will host dressage master, author, German Federation Gold Riding Medalist, Olympic Three-Day eventing coach, and Toronto CADORA Association Hall of Famer, Walter A. Zettl, known and quoted the world over as ‘WAZ.’

Premier Equestrian and Zettl, who released Dressage in Harmony in 1998, and The Circle of Trust in 2007, will introduce riders and readers to his third opus on classical dressage, Ask Walter.  The book will officially debut in May, but the first 200 advance orders will be signed by Zettl, who will be on hand to meet fans and sign autographs during the USDF-accredited 2013 Dressage Summit, February 9-11, at The Stadium at Palm Beach International Equestrian Center in Wellington, FL.

END_OF_DOCUMENT_TOKEN_TO_BE_REPLACED

Wellington, FL (November 13, 2012) – For dressage enthusiasts, winter in Wellington is the best way to usher in the new year. Each year, familiar faces and new ideas, steeped in long standing traditions, are a big part of the equestrian community celebrations.  2013 will be no exception, especially with the debut of the Dressage Summit, a 3-day unprecedented event bringing together the best of classical dressage, competitive dressage training and natural horsemanship methods presented by five of the top names in the business. Featuring Klaus Balkenhol, Walter Zettl, Christoph Hess, and Linda and Pat Parelli, The Dressage Summit will focus on working together to build stronger horse/human partnerships in classical dressage. These renowned presenters will demonstrate how to apply the fundamental principles of classical dressage to every level of the sport while respecting the dignity of both horse and human. This groundbreaking collaboration between dressage masters and top horsemen provides an exciting new perspective where dressage and natural horsemanship converge to enhance the training of the dressage athlete.

END_OF_DOCUMENT_TOKEN_TO_BE_REPLACED

Ocala, FL (May 5, 2011) – Classical Dressage Master Walter Zettl has built his successful dressage career on understanding the relationship between the horse and rider.  Zettl coaches Linda and Pat Parelli, founders of Parelli Natural Horsemanship, Inc., and regularly conducts private dressage clinics at the Parellis’ Ocala facility. Zettl recently spent time in Ocala with the Parellis, teaching and being taped for dressage videos which will appear on the Dressage Training Online website.

“The Dressage Training Online website is a wonderful venue for us to be included in,” said Linda Parelli. “Walter is a great bridge for us because he believes in what we are doing in natural horsemanship and he sees how closely our approach relates to the principles of truly classical dressage.”

Zettl taught lessons and was taped for the Dressage Training Online segments with Linda and her horse West Point as well as with Canadian Para-Equestrian Team member Lauren Barwick, a para-equestrian who won Gold and Silver Medals in the Beijing Paralympics in 2008. Barwick is a Four Star Parelli Instructor and a Senior Protégé in the Mastery program of the Parellis’ Natural Horsemanship Program.

END_OF_DOCUMENT_TOKEN_TO_BE_REPLACED

Ocala, FL (February 17, 2011) – Classical Dressage Master Walter Zettl has spent his life on the forefront of the dressage world, from coaching Olympic riders to producing DVDs and books that have become staples in dressage libraries the world over. Zettl has joined forces with Pat and Linda Parelli, founders of Parelli Natural Horsemanship, Inc., and recently taught a private dressage clinic at the Parellis’ Ocala facility.

“Walter has been working with us for several years and is very natural in his approach and says teaching Parelli students is a luxury because so much is already in place, even if some of the students ride in a western saddle,” said Linda Parelli, adding that she and her husband Pat and several Mastery Students rode in the clinic with Zettl. “Walter really likes it that Pat and I take part in his clinics and ride in lessons with him. He likes it that we are constantly furthering our education.”

While the Parellis have built their Natural Horsemanship program based on in-depth equine psychology and common sense communication techniques between the horse and rider, which ultimately leads to success, these are the same principles Zettl has been using for years. “Walter puts the horse’s needs first and figures out if the horse needs calming, or motivation and energy, when being ridden,” Linda said. “Walter uses psychology and zero force, and tries to understand things from the horse’s point of view. He is always saying ‘gentle, gentle’ and loves that Parelli people already have a great relationship with their horse.”

END_OF_DOCUMENT_TOKEN_TO_BE_REPLACED

Weiler, who rides with trainer Gareth Selwood in Newberry, Florida, praises Selwood for helping her throughout the show year but also acknowledges she couldn’t have done it without her Parelli background. “My success with Lucea shows what a Parelli rider can do with a solid foundation of natural horsemanship, a great horse and a dedicated trainer,” Weiler said. “For riders who aren’t familiar with Parelli, they will find that natural horsemanship helps the rider and horse develop a great relationship. I think everyone should try it and they will find out that it is addicting to have a relationship with your horse!”

Parelli Natural Horsemanship, Inc., was founded by Pat and Linda Parelli with the goal of helping all horse owners achieve success without force while developing a natural and harmonious relationship with their horse. “Parelli gives riders a necessary foundation from which they can move confidently into the competitive horse show world,” Selwood said, when asked about Weiler’s success and how natural horsemanship affected it. “The Parelli system prepares riders so they can excel in all disciplines. It certainly makes my life as a coach much easier if my students have a good start in natural horsemanship.”

END_OF_DOCUMENT_TOKEN_TO_BE_REPLACED

Sandy, UT (January 7, 2011) – Premier Equestrian, LLC, a leading supplier of dressage arenas, horse jumps, and stable accessories, is pleased to congratulate classical dressage master Walter Zettl on his induction into the Toronto CADORA Dressage Association Hall of Fame. Zettl has been a long-time advisor to Premier Equestrian and is also the technical advisor for Dressage Today Magazine.

“Walter is one of the true classical dressage masters left on the planet and we are so happy that he was recognized for being a contributor to the evolution of the sport of dressage,” said Heidi Zorn, President of Premier Equestrian. “Walter has lived in Canada since 1981 and has had a big impact on the Canadian dressage community. He has also had a big impact on our company and has advised and directed Premier on our products over the years.”

Zettl, who is now in his 80s, has spent years on the forefront of the dressage world, from coaching Olympic riders to teaching, training, offering clinics, writing books and producing DVDs. “It wasn’t a surprise to his family, friends or students when he was inducted into the Toronto CADORA Dressage Association Hall of Fame,” Zorn said. “Zettl’s ‘Matter of Trust’ DVD series was produced by Dancing Deer Productions and distributed by Premier.  The DVD covers classical dressage techniques from Training level to Grand Prix, and we were very pleased to have been part of it. Getting to know Walter, and understand his true passion for dressage and horses, has been a real blessing.”