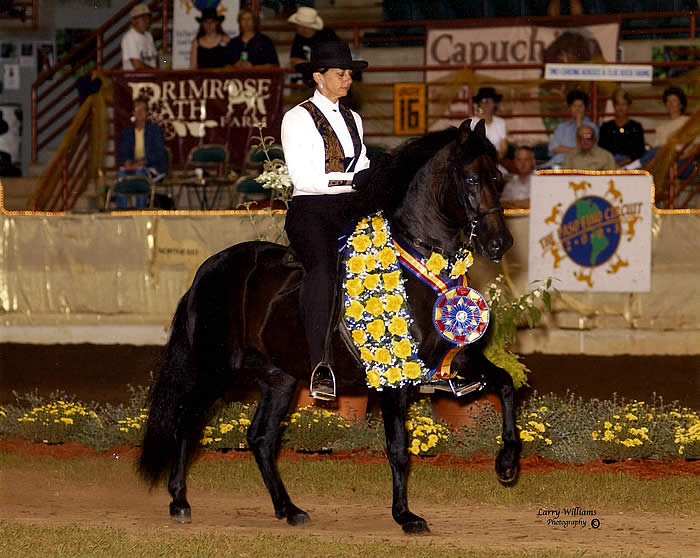 March 1, 2013 – TALLAHASSEE, Fla. — The Red Hills International Horse Trials on March 8-10 will showcase Viva Florida 500 and the Paso Fino. For the sixth year as the only invited breed organization, members of the North Florida Paso Fino Horse Association (NFPFHA) and their horses will be at Red Hills Horse Trials on Sunday, March 10, to demonstrate the versatility of this historic breed, as they gear up for their annual show in Marianna, Florida at the end of April.

Spectators will have the chance to see a Paso Fino Grand National Champion stallion in the Red Hills Horse Trials Viva Florida Parade of Breeds, ridden by nationally recognized horsewoman Robin Ratliff. Ratliff has won more than 150 Grand National Championships, and her numerous awards and honors include the national Paso Fino Horse Association “Trainer of the Year” as well as the United States Equestrian Federation “Equestrian of Honor.”

“If you’ve never seen a Paso Fino, this is an opportunity you won’t want to miss,” says NFPFHA President Leatha Flowers. “The Paso Fino movement is completely unique to the breed, and they are known for being the smoothest riding horse in the world – you have to ride one to believe it.”

Today’s Paso Finos trace their origins to the horses brought over in ships on the rough sea voyages to the New World nearly 500 years ago. Viva Florida 500, which commemorates the anniversary of Ponce de Leon’s east coast landing in 1513, not only celebrates the state of Florida, but it also is a pivotal point in the rich history of the Paso Fino.

According to Flowers, when the Spanish set out for the New World, they took careful consideration about what kinds of horses could endure the voyage. These horses needed to be small, sure-footed, strong, versatile and beautiful.  Most importantly, the horses had to have a smooth stride – or gait – because the conquistadors wore heavy armor and weapons, and they did not want to bounce or “post” while they rode for hours or days. “The Paso Fino was the obvious choice,” says Flowers.

Nearly 450 years after those ships landed, Colin Phipps of Tallahassee brought the first Paso Finos to North Florida, to where the Red Hills Horse Trials are held today.

Red Hills spectators desiring to see more Paso Finos in action can attend the NFPFHA competition on April 27, at the Jackson County Agricultural Center in Marianna. Pasos from across north and central Florida – as well as Georgia, Alabama and Louisiana – will be competing in the annual “Gait-way to Fun Paso Show,” a qualifying event for the Grand National Show later this year.

“Recognition of the historic Paso Fino through Viva Florida 500, Red Hills Horse Trials and regional events will provide many opportunities for education and entertainment,” says Flowers.