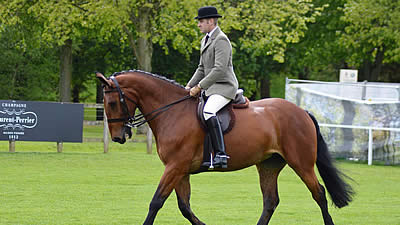 After the cancellation of Royal Windsor Horse Show which was to run in the private grounds of Windsor Castle, ‘The Queen’s Back Garden’, from 13-17 May, organisers moved the Show online to create Virtual Windsor 2020. More than 4,200 entries were received for the online Showing competitions, including several from HM The Queen.

A ‘usual’ Royal Windsor Horse Show would receive around 2,800 entries, illustrating how the equestrian community has come together to make Virtual Windsor 2020 a larger success than ever envisioned.

A huge number of viewers watched the Show online with more than 250,000 tuning in to enjoy the event over its five days, while the social media reach soared past the million mark.

The numbers surpassed all expectations and organisers were particularly delighted by the number of viewers from overseas with more than 90 countries getting involved.

24 Showing classes were run over the five-day virtual Show, mixed with streaming of 5* Jumping and Dressage classes from previous live events, along with displays and competitions that you can only see at Royal Windsor Horse Show.

Over the course of the five days, many stars of the equestrian world joined the virtual Show in interviews and commentary. Their Royal Highnesses, The Earl and Countess of Wessex, also participated in a video interview showing their support for the event.

As a first-time event for Royal Windsor Horse Show, organisers expressed it was more than they could have ever wished for. Simon Brooks-Ward, Show Director, ended the Show by thanking all involved and hoping to see everyone again – in the flesh – next year.

Brooks-Ward said: “We’ve been delighted by the response we’ve had to Virtual Windsor 2020. It’s been fantastic to see the Show’s community getting together to keep the Show going – whether they are competitors, shop holders, sponsors, stewards, judges and officials, or visitors – everyone has been engaged. I think it demonstrates how important the Show is for all and how close it is to their hearts.”

Details of the virtual Show can be found by visiting virtual.rwhs.co.uk. The site will be constantly updated and will remain in place throughout the year.