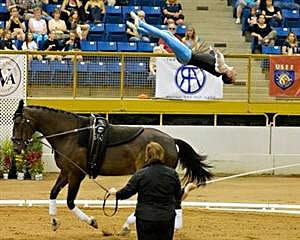 Coming into the individual competition in Denver, the story was Mary McCormick looking for a fourth consecutive title in the Gold division, but it was clear from the beginning that she would have competition. The best of that competition came from Mt. Eden Vaulting Club’s Elizabeth Ioannou. Ioannou (Saratoga, CA) was coming off a team championship win on Saturday, and a strong first round individual score of 8.558, before ensuring herself a National Championship with a fluid freestyle effort in round two, and an overall 8.450. Just enough to get the better of McCormick (Woodside, CA) who finished second, and Emily Hogye (Ben Lomond, CA) in third. Ioannou vaulted on Jan Garrod’s 13-year-old Oldenburg gelding Urfreund Rosengaard and was lunged by Emma Seely.

Earning the women’s Silver National Championship was Woodside Vaulter’s Siddhartha Kreaden (Sunnyvale, CA), vaulting on Woodside Vaulters’ nine-year-old Limerick (an Irish Sport horse gelding that has only been a vaulting horse for about eight months) and lunged by Krista Mack.

In the Bronze division, 10-year-old Kristen Kuhn (San Mateo, CA), also of the Woodside Vaulters vaulting club, won the National Championship while vaulting on Limerick and being lunged by Krista Mack.

In the Male Gold division Kristian Roberts of Half Moon Bay, California, and representing the Half Moon Bay Vaulters, successfully defended his title with strong performances that scored above seven in both rounds. Vaulting on Jill Palmer’s Shire/Thoroughbred cross gelding Hudson, and lunged by Carolyn Bland, Roberts earned a total score of 7.498. Following him in second with a 6.983 was Eric Garcia (Novato, CA) of the Tambourine Vaulters, and in third with a 6.808 was Gabe Aniello (Redwood City, CA).

USEF Team Vaulting Championships were awarded earlier in the week. To read about them, click here.

For more about the USEF/AVA National Championships, go to www.americanvaulting.org/Nationals2013/. 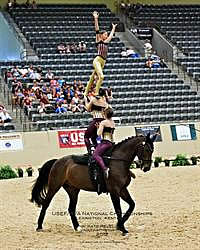 Mt. Eden Sun will return to defend their title in Denver (Lynne Owen/VaultingPhotos.com)

Denver, CO – Ten United States Equestrian Federation (USEF) National Vaulting Championships are up for grabs this week at the National Western Complex in Denver, Colorado. Team champions in the A, B, and C divisions will be determined, male and female individuals will compete for Bronze, Silver, and Gold division titles, and one pair will walk away Open Pas de Deux National Champions.

Last year’s A division team champions, Mt. Eden Sun, will be back to defend their title in Denver.

Individual tests also begin Thursday with the male and female Bronze compulsories. Silver and Gold division compulsory tests will be on Friday. Vaulters from all three divisions will perform freestyle tests on Saturday, and close out competition on Sunday.

Mary McCormick (Woodside, CA) will be looking for a fourth straight National Championship in the female Gold division, but will be facing tough competition from a field that has been shining nationally and internationally in 2013. Alicen Divita (Redwood City, CA), who earned a 6th place finish at CVIO3* Aachen this summer and won the 3* division at the Pacific Cup CVI, will be among them. So will Region 2 champion, and Divita’s Woodside Vaulters teammate, Emily Hogye (Ben Lomond, CA), who bested McCormick and Divita at those AVA Region 2 Championships in July.

In the male Gold division, Kristian Roberts (Half Moon Bay, CA) returns to defend his title. Roberts represented the U.S. at CVIO3* Aachen this year and finished on top of the 3* division at the Pacific Cup CVI. He will also face tough competition from a field that includes Gabe Aniello (Redwood City, CA), the only U.S. vaulter to ever qualify for the FEI World Cup Vaulting Final.

Pas de Deux competition begins on Saturday and finishes after a second round on Sunday.

With last year’s National Champions not competing in Denver, a new Pas de Deux champion will be determined this year. One pair to keep an eye on are sisters Kimberly and Cassidy Palmer (Half Moon Bay, CA), who earned a 4th place finish this year in Aachen.

On Thursday and Friday, USEF competition runs alongside the American Vaulting Association (AVA) National Championships and the National Festival. Approximately 300 vaulters and 75 horses will be in attendance representing vaulting clubs from all over the country.

For more about the National Western Complex, go to www.nationalwesterncomplex.com.

For more about the USEF/AVA National Championships, go to www.americanvaulting.org/Nationals2013/.

Denver, CO – More than 300 top equestrian vaulters in the United States came together this weekend at the National Western Complex in Denver, CO for the USEF/AVA National Championships – and they did not disappoint.

“Our team competition was especially good this year, at all levels, from the lowest levels to the highest level,” said Linda Bibbler, Vice President of Competitions for the American Vaulting Association (AVA). “I was happy to see such strong representation from all parts of the country. All together the quality of the individual vaulters, pas de deux, and teams was very high.”

For the second year in a row, the Women’s Individual National Champion was Mary McCormick, one of America’s most decorated vaulters. McCormick, of Mt. Eden Vaulters, Saratoga, CA, vaulted on Sir Anthony Van Dyck (aka “Spike”) lunged by Carolyn Bland. McCormick was named USEF Vaulter of the Year in 2007 and 2009.

Next year, the AVA/USEF National Vaulting Championships will take place at the Alltech Arena at the Kentucky Horse Park in Lexington, KY, August 1-5, 2012.