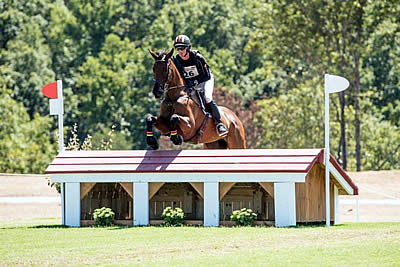 Tryon, N.C. – A group of the finest well-known names in eventing competed in the Adequan Advanced Gold Cup Final division at the 2016 Nutrena USEA American Eventing Championships presented by Land Rover at the Tryon International Equestrian Center, September 2-4. In addition, the U.S. combinations in the division also vied for the USEF Open Horse Trial National Championship and the Jack LeGoff Trophy. After getting off to a slow start, Doug Payne and Vandiver found their groove to claim the title with an overall score of 41.5.

“It is an incredible honor. It could have been anyone’s day. To be in the mix and have an opportunity, that is all one can ask for. You hope a little luck goes your way, and having some incredible horses to work with has been a blessing,” said Payne.

Payne (Aiken, S.C.) spent last year qualifying Debi Crowley’s Vandiver for the 2016 Rolex Kentucky Three-Day Event presented by Land Rover, where they placed 22nd in their first CCI4* outing together. With that hurdle cleared, Payne has begun further gauging the 2004 Trakehner gelding’s strength and weaknesses as well as the competitive advantage he may have with him. Payne got a good indicator over the past three days of competition.

Payne and Vandiver began the competition with dressage on Friday. Vandiver got a bit nervous in the test. However, he regained his composure and had a consistent test for a score of 31.5.

“There have been times in the past that if I lost him, I would lose him for the rest of the test,” said Payne. “He has a tremendous upside, is incredibly talented, and probably the most genuine horse that I have worked with.”

The growing combination sat in 10th place moving into Saturday’s cross-country course. The Captain Mark Phillips-designed course presented numerous challenging questions, and not a single combination could find the exact formula to finish the course within the optimum time of 6:40. While every combination fell victim to time penalties, Payne and Vandiver posted one of the fastest times in the field at 6:55. As Payne watched combinations rack up time penalties, he and Vandiver worked to trim seconds at every opportunity. Payne pinpointed areas to shave time when walking the course, including a short cut through the Land Rover Hollow. As a result, they managed six time penalties and moved to second place with an overall score of 37.5.

“He has a great gallop, which is a distinct advantage. He is quite careful; I don’t have to spend a lot of time setting him up for fences or combinations. I was concerned that he might slip on a tight turn, and knowing the conditions were a bit slippery, I probably spent a little more time just to make sure I got it done without having a slip,” said Payne.

Payne and Vandiver dropped to third place overall but picked up the USEF Open Horse Trial National Championship with one rail down during Sunday’s show jumping course. The field had to negotiate some tricky lines, with nine combinations going clear. Payne and Vandiver managed the course well until they reached the Nutrena double combination, where Vandiver knocked the top rail of the second element.

“I’m very thankful that Debi Crowley gave me the opportunity to work with him, and I can’t wait to see what is to come in the future. In addition to owning him, Debi also bred him, which is a neat story for U.S. combinations,” said Payne. 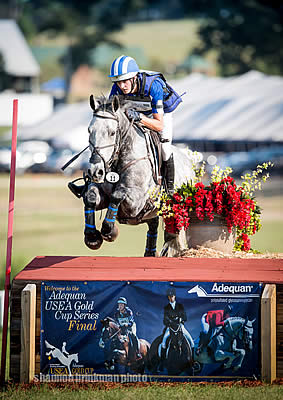 Tyler, Texas – A small but mighty field of 11 combinations competed in the Adequan Advanced Gold Cup Final division of the 2015 Nutrena USEA American Eventing Championships presented by VTO Saddlery (AEC) at the Texas Rose Horse Park over the weekend. The USEF Open Horse Trial National Championship was held in conjunction with the Advanced division, allowing this year’s nine U.S. competitors to earn an additional prestigious title. Twenty-one-year-old Jacob Fletcher had a stellar weekend on his home turf in Area V, leading from start to finish, with Atlantic Domino to win both the Adequan Advanced Gold Cup Final and USEF Open Horse Trial National Championship titles.

Fletcher (North Little Rock, Ark.), an Eventing 25 Program participant in 2013 and 2015, started the week off on Thursday with a smooth, accurate dressage test aboard Atlantic Domino to receive an impressive score of 27.6 and sit atop the leaderboard. The pair made light work of Captain Mark Phillips’ cross-country course on Friday, adding just 4.0 time penalties to their dressage score. Fletcher and the 2005 Irish Sport Horse gelding owned by Fletcher Farms brought their weekend to a triumphant finish on Saturday with a double-clear round over Marc Donovan’s show jumping track. The duo claimed top honors with a final score of 31.6.

“I had a really successful run at Richland Park before this, and I was looking to build on that, but I was not expecting to do so well,” said a pleasantly surprised Fletcher. “Atlantic Domino was fantastic in dressage, even with an error, and on cross-country he was very good. You had to be very fast where you could be because the course was quite twisty. Show jumping is his best phase so I was expecting a double-clear round. He was really great and I couldn’t be prouder of him.”

The win had added meaning since Fletcher won on his home turf of Area V. “Area V was very lucky to host the AEC. I thought someone from Area V should win the Advanced division before the AEC moves to a new venue next year, and I am happy and proud that I was able to do that.”

The young rising stars owned the division as twenty-year-old Caroline Martin (Miami Beach, Fla.), a 2013 Eventing 18 program alum, won the Reserve Champion title with her and Sherrie Martin’s Quantum Solace. She and the 2005 Argentinian Thoroughbred gelding had a solid dressage test to score 36.7 to lie in seventh place after the first phase. The pair had the only double-clear cross-country round to move up to third place on the leaderboard. Martin and Quantum Solace continued their fantastic form in the final phase, having a double-clear show jumping round to make them the only pair to finish on their dressage score of 36.7.

Buck Davidson (Unionville, Pa.) and Wundermaske finished third in the division on a score of 43.0. He and Sharon White’s 2003 Hanoverian/TB gelding began the competition with a dressage score of 32.6. The pair added 2.4 time penalties to their score on cross-country day and had two rails in the show jumping phase.

Find more information on the AEC and view results.