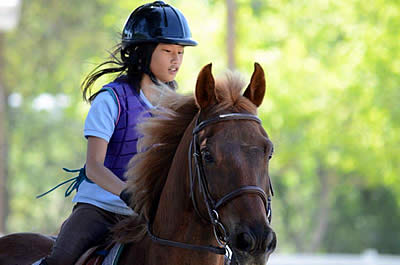 Livermore, Calif. – August 26, 2016 – Equestrians Andie Sue and Kaysie Li Roth from the Middle California Region in the Irons Pony Club in Livermore, Calif. excelled at the 2016 United States Pony Club Qualifying Tetrathlon Rally June 17-19, at the Graham Hill Showgrounds in Santa Cruz, Calif.  Andie Sue, born in Guangzhou, China, and adopted at 15 months old, had her leg amputated below the knee due to birth defects at two years of age, she is now 11. Kaysie Li was born in Suzhou, China, and adopted at nearly 6 years old; she is now 9. Kaysie Li had her left leg amputated below the knee. Both girls competed over the Rally weekend finishing with top results. The Tetrathlon Rally includes multiple phases of running, swimming, jumping, and shooting.

Andie Sue and horse Tam O’Shanter (Indiana Hoolihan x Moonrise Kee Ranchera), owned by Karen Davison and Sally Coleman, competed in the Pre-Novice group even though she is actually a 10U.  She achieved a perfect ride score of 1100 and earned a third place in the swim section for a final place of second overall for her age group. The Pre-Novice division is for 13 years and under and the rider must be a D-1 or above.  The four sections include a run, swim, jump, and shooting. The length of the run shall be 500 meters. The length of the swim shall be 50 yards/meters. The jumping height will be 2’3″ maximum. The shooting is 20 shots. Competitors must be standing and may shoot with two hands. Andie Sue joined Pony Club as an eight year old in 2013.  She has earned her D1, D2 and D3 traditional (Flat, cross country and show jumping) certifications and is studying to take her C1 traditional in October.  She also has earned her D1, D2 and D3 certifications in Western.

Kaysie Li rode Glitter Shadow (Townsend Triton X Fanny), owned by Karen Davison, in the 10 years and under age group. For this group the rider must be a D-1 or above. Kaysie Li has earned her D1 rating in English and Western and took her D2 test for Dressage in July. In the four phases Kaysie Li completed her first ever 50 yard swim, earned 3rd place in the ride phase and came in 4th place in her age group in the personal horse management inspection. The phases include a run of 500 meters, a swim of 50 yards, jumping height of 18 inches, and shooting 10 shots.

This rally followed the Pony Club rules and guidelines including no assistance during the rally. Their mom Barbara Roth noted, “The kids come away with such a sense of accomplishment knowing that they understand the right steps to take care of their own mount.”

Kaysie Li noted, “Last year I needed so much help. I couldn’t bridle or saddle or do anything. This year I was able to do all those things by myself.”

Both girls have come a long way in their riding. Barbara Roth explained, “Andie Sue started riding when she was 3 but she started riding independently at 5.  She had been amputated at 2.  After I could see that she was interested in riding I took her and her saddle with a saddle tree up to Shriners at Sacramento and asked her prosthetist to measure angles and fit until we came up with a riding prosthetic that would work for her.  Andie Sue was the one who figured out how to make the ankle work for her and her awesome prosthetist built it. Kaysie Li was adopted at 6 and had never seen an animal before.  The first time she saw our horses she was pretty surprised that we actually wanted her to get on that beast. She watched her sister for a while and we didn’t push it.  She had several surgeries so her riding was not consistent at first but she really liked it and I could see that everything about her changed when she was in the saddle.  She was confident and was building muscle and strength.  She literally felt like mush when we adopted her, no muscle tone at all, and now she is competently riding a 1000 pound horse in the show ring and smiling from ear to ear.”

Both girls will continue to train through the fall and compete at several shows. Andie Sue hopes to be eventing at the Novice level soon and Kaysie Li would like to compete in her first Dressage shows in the coming years.