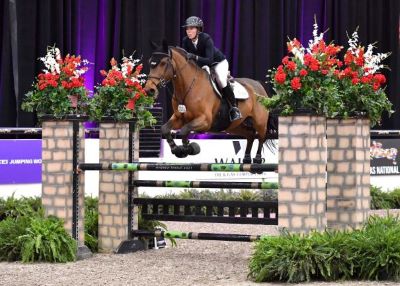 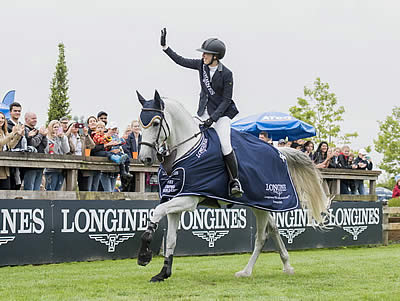 It only took one round of jumping to determine the winner of the $145,000 CSI4*-W Longines FEI Jumping World Cup™ Vancouver (CAN). Uma O’Neill (USA) jumped the only clear round aboard Clockwise of Greenhill Z to win the class without a jump-off.

Second to jump the Alan Wade (IRL) designed track, O’Neill’s round held sway as the only faultless performance throughout the remainder of the 29-strong field. Defending champion Conor Swail (IRL) and Rubens La Silla finished second with the fastest 4-fault round (74.26 seconds), knocking only a careful plank vertical that fell often throughout the afternoon. Juan Jose Zendejas Salgado (MEX) and Tino la Chapelle (4, 75.87) finished third. O’Neill’s win was her first in a World Cup qualifier.

“I am ecstatic. I just went out and gave it everything I could today and asked a little bit extra of myself and my horse, and it really paid off!” — Uma O’Neill (USA)

Wade challenged the riders with numerous technical nuances on course. The course designer from the 2018 Longines FEI Jumping World Cup™ Final in Paris (FRA) said he never designs with a number of clear rounds in mind.

“There were a lot of little tests out there,” he said. “[The course] was solved very early on — second horse in — so we knew it was solvable. There were a lot of riders with 4 faults that, I believe, felt that if they had a second chance, they would have gone clear. But that’s one of the great things about show jumping: You get one chance, and you have to take it. We got a lot of excitement and anxiety from people knocking polls late [in the class]. It doesn’t all have to be about speed [in a jump-off]. It is showjumping after all. I think it was good sport.”

Swail declared for the east coast sub league, so he takes over those standings with 17 points. Salgado, meanwhile, will move into the runner-up slot in the west coast with 15 points.