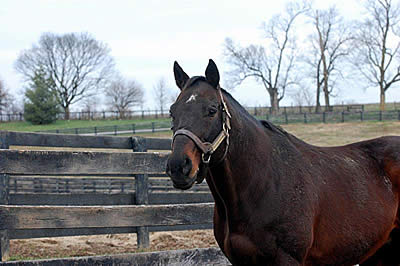 Michael Blowen, founder and president of Old Friends, made the announcement today.

The 21-year-old stallion comes to Old Friends from Adena Springs in Paris, KY., and has been generously donated by Adena owner Frank Stronach along with an endowment. In October, Old Friends also accepted the Stronach-owned Alphabet Soup.

Sired by Deputy Minister out of the Buckpasser mare Passing Mood, Touch Gold began his career in Canada with trainer Daniel J. Vella. He came to United States as a 3-year-old and was campaigned by David Hofmans. In the U.S., Touch Gold won the GR2 Lexington Stakes at Keeneland. Not entered in the Kentucky Derby, he ran fourth in Preakness Stakes after a troubled trip and a suffering a hoof injury.

In the Belmont, Touch Gold laid Derby and Preakness winner Silver Charm’s Triple Crown bid to rest when he went wide and surged ahead to catch the favorite in the closing yards.

Silver Charm was repatriated from Japan in 2014 and is also now pensioned at Old Friends.

Touch Gold went on the capture the GR1 Haskell Invitational before retiring with 15 starts, 6 wins and career earnings of $1,679,907.

As a sire, Touch Gold is well represented by four Grade I winners, including Royal Challenger, who won the Breeders’ Stakes, the third leg of the Canadian Triple Crown, and Seek Gold, who won the GR1 Stephen Foster Handicap and is now also retired at Old Friends. His son Medalist is also a multiple-graded-stakes winner.

“It’s amazing to reunite these two great rivals,” said Blowen of Touch Gold and Silver Charm. “We also now have War Emblem and the horse who ended his Triple Crown Bid, Sarava. It’s a great to revisit and recount these wonderful racing stories.

“Our thanks again to Mr Stronach and everyone at Adena Springs for entrusting us with this amazing horse,” Blowen continued. “We hope all of Touch Gold’s fans will come visit him.”

Old Friends is a 501 (c) (3) non-profit organization that cares for more than 155 retired racehorses. Its Dream Chase Farm, located in Georgetown, KY, is open to tourists daily by appointment. Old Friends also has a satellite facility in Greenfield Center, New York, Old Friends at Cabin Creek: The Bobby Frankel Division, which is also open to visitors. For more information on tours or to make a donation, contact the main farm at (502) 863-1775 or see their website at www.oldfriendsequine.org.