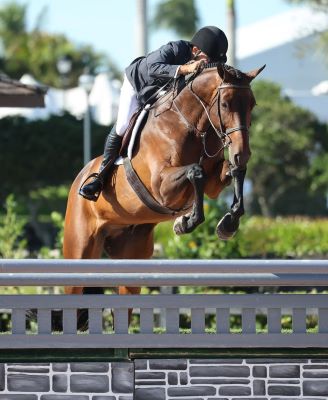 John French set a high bar for the 2023 hunter season at Wellington International with Milagro on Friday. The pair jumped around effortlessly to steal the win in the $25,000 USHJA International Hunter Derby during opening week of the Winter Equestrian Festival (WEF) in Wellington, FL.

Thirty combinations set out to conquer the classic derby format class as a highlight to professional, amateur, and junior hunter competition during WEF’s 2023 debut.

French and Milagro, the coming eight-year-old gelding owned by Kent Farrington, LLC, claimed the derby victory over an interesting course plan in front of two panels of judges.

“The course was different; it wasn’t your typical turns, so you had to really pay attention to where you were going. There were times you thought you’d be going left, but really you were turning a little sharper to the right,” he said after posting a first-round combined score of 186. “Sometimes you do that in the handy, but there were a lot more turns today. It was definitely a true derby course and not your normal hunter course.”

Tomas Yofre Has What It Takes in Bainbridge 1.40m Speed Challenge

Argentina’s Tomas Yofre is off and running at WEF with a victory in the Bainbridge 1.40m Speed Challenge on Friday riding Eliante Z, a 2013 Zangersheide mare by Ermindo W. From a starting field of 62 over a course designed by Eric Hasbrouck USA, Eliante Z proved she had the speed to top them all for owner by Stellium Sport Horses LLC.

“I am so thankful to Olivia Broder and her family for trusting me with this special mare,” said Yofre of the mount he’s only been partnered with since the end of the 2022 season. “She gets better and better. She is super careful and competitive, and I think she can win any class she wants.” 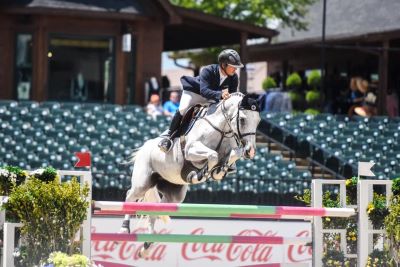 The Catsy Cruz (MEX) designed course challenged 34 entries in the first round, with only four duos returning for the jump-off round. While Yofre and the 2010 Holsteiner mare (Caretino x Tamara V) owned by Stellium Sport Horses LLC have only been paired together for a few months, they are already clicking as a team, he shared.

“She is amazing. I’ve had her for four months, and she’s done very well, so I’m happy.” The trailblazers for both the first and second rounds of competition, Yofre reported that his plan was to focus on the technical difficulty of the track while keeping the time in mind. “I was the first to go in, and it was technically difficult. I had a plan, and I just stuck to the plan and it worked out. The times were very close.”