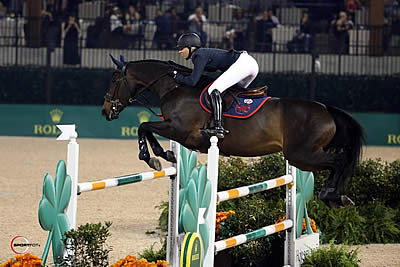 Mill Spring, NC – May 23, 2017 – Tina Yates of Wellington, FL and Cicomein VDL, owned by HKC Collection LLC, were victorious in the $25,000 Hearthstone Grand Prix at Tryon International Equestrian Center (TIEC) after they completed the jump-off track in 42.921 seconds to secure their first ever win at the venue. Fernando Cardenas, Jr. of Raleigh, NC and Valentine Car captured second place with a jump-off time of 43.489 seconds, while Harold Chopping of Southern Pines, NC piloted Basje to third place, after stopping the jump-off timers in 43.55 seconds.

Yates made quick work around the grand prix track with Cicomein VDL, a 2007 Dutch Warmblood mare (Chacco Blue x Pomein), finishing a second faster than Cardenas, Jr., who took top honors in last week’s highlight class under the lights. Yates and Cicomein VDL tackled the tough track set by Pierre Jolicoeur with ease. They were the second of five pairs to advance to the jump-off round in front of an enthusiastic crowd. The evening’s class served as the mare’s first major competition under the lights and Yates was very proud of how Cicomein VDL handled and excelled in the atmosphere.

“My plan with her was to just be efficient and also give her a smooth and accurate ride. I didn’t know if the lights would play a factor or not. She naturally has very fast foot speed, so I typically don’t have to worry about the time allowed. I had a really lucky rub at the beginning, but think that may have helped me during the rest of the course because she was paying attention,” detailed Yates.

Yates described the top qualities of Cicomein VDL, saying, “She is so fast and she loves to slice the jumps. Sometimes she gets too quick across them, so I have to think about using her foot speed. I have to keep her staying very straight and then I can let her do the rest.”

The jump-off asked a series of technical questions, testing each combination’s ability to execute tight turns then move into a forward and long gallop. The duo stopped the timers with an efficient time and their efforts remained unmatched as they ultimately took top honors in the class.

“Tonight she was really fresh and aware. I think that also helped a lot. I would have liked to find one less to number three, the white vertical, but I knew if I found one less, we may have had it down behind. I didn’t want her to get to flat. To the last fence I found exactly what I wanted. I think everything fell into place.”

Yates and Cicomein VDL were partnered together several years ago before the mare changed hands to another rider. However, Yates has returned to the irons and has high hopes for the pair’s future together.

“When I made the decision to sell her, she was a more quality horse then where I was as a rider at that point. I sold her to one of our owners and a few other professionals showed her before things came full circle and I ended up back with her,” she explained.

In her first trip to TIEC, Yates was able to capture a win in the coveted Saturday night grand prix class and hopes that the pair’s success will continue forward as she looks onto next week where they will once again plan to compete in the highlight classes at TIEC during Tryon May IV.

“This is our first time to Tryon and I have to say it is a world-class facility. Everything was thought through like the fans for the horses in the barns, permanent bathrooms with air conditioning, and the restaurants. It’s all just fantastic,” she commented. “Just the whole atmosphere tonight was incredible and I was so surprised with the crowd they get here. There were kids and all of these spectators who came to watch; it was just a really nice atmosphere for a win.”

Glenn Hartigan of Alpharetta, GA and Z Coco Cabana captured the victory in the $25,000 Suncast® Commercial Welcome Stake to begin a competitive week of competition during Tryon May III. The pair finished the jump-off in 39.618 seconds ahead of Fernando Cardenas, Jr. and Quincy Too, who completed their jump-off round in 42.071 seconds. Angel Karolyi of Aiken, SC and April Moon finished in third with a time of 40.204 seconds.

The class featured 25 entries with eight combinations moving forward to the jump-off round, while only Hartigan and Cardenas, Jr. finished the afternoon as the only double clear efforts in the class. Pierre Jolicoeur set the track, which served as a competitive class ahead of the week’s featured $25,000 Hearthstone Grand Prix.

The $8,000 High Junior/Amateur Owner Classic was championed by Jacqueline Ward of Seabrook, TX and her own Cayman, who finished in first place with a jump-off time of 42.327 seconds. Caitlyn Epperson of Houston, TX and Camero finished in second place with a time of 40.325 seconds, adding four faults to their score. Quinn Larimer of Mableton, GA and Bronson CR, owned by Nestledown Equine Service, LLC, finished in third after finishing their jump-off round with nine faults and stopping the timers in 43.68 seconds.

Beth Von Brecht of Dallas, TX and her own Melody were victorious in the $5,000 Ariat® Medium Junior/Amateur Owner Classic finishing in 38.354 seconds, to best the competitive class. Carly Dvorkin of Parkland, FL and Carlotta 168, owned by Pine Hollow Farm, took second place with a jump-off time of 39.554 seconds. Jesse Smith of Wellington, FL and her own Chambery 25 took third place with a time of 40.12 seconds.

The $3,000 Low Junior/Amateur Owner Classic saw Madeleline Gastinaeu of Holicong, PA and Limited Edition, owned by Mary Gastinaeu, take top honors ahead of Sarah Boston of Owings Mills, MD and her own Herminas, took second place with a time of 36.138 seconds. Meghann Harmon of Middleburg, VA guided her own Quastor van de Helle Z to third place with a time of 37.083 seconds.

Santiago Arenas of New Hill, NC guided Barbara Car, owned by Fernando Cardenas, to top honors in the $2,000 NAL/WIHS High Adult Amateur Classic after stopping the timers in 34.592 seconds ahead of Sienna Partipilo of Chicago, IL and her own Alanda, who captured second place with a time of 36.392 seconds. Anna Claire Smith of Atlanta, GA and her own Bilbo Baggins finished in third place with a time of 38.066 seconds.

Cayman Szegda of Marietta, GA and her own Valotti VDL finished atop the $2,000 NAL/WIHS High Children’s Classic ahead of Rose Dillon of Milton, GA and her own Baba Booey WB secured second place after accumulating two time faults in the first round to cross the timers in 85.614 seconds. Carly Hoft of Rolesville, NC and Available Ohio, owned by AvailableJumpers.com, finished in third place with four faults in the first round in 81.84 seconds.

The Adult Amateur Hunter 36-49 Division was championed by Tricia Barr of Wellington, FL and Big Girls Don’t Cry, owned by Rodney Bross, ahead of Kimberly Penfold of Lake Bluff, IL and Cucinelli, owned by Glory Days Farm, LLC, who followed in reserve.

Kaitlin Porath of Charlotte, NC and her own Breaux earned the tricolor in the Amateur-Owner Hunter 3’3″ 18-35 Division ahead of Alliah Kassem of Fayetteville, GA and C Beyond, owned by Bijoux Show Stables, who earned reserve champion.

The Amateur-Owner Hunter 3’6″ Division saw Missy Yoder of Palm Beach Gardens, FL and Too Much Fun take top honors throughout the week. Rosie Powers of Dover, MA piloted her own Carabello to reserve champion.

Frankie Nicklaus of Duluth, GA rode to victory in the Children’s Pony Hunter Division aboard Nicely Dun, owned by Patchwork Farm LLC, ahead of Stephanie Grace Fernandez of Winston Salem, NC and her own Master Plan were presented with reserve champion honors.

The Adult-Amateur Hunter 50 & Over Division saw Martin Schlaeppi of High Point, NC and his own I C London take top honors in the division ahead of Jennifer Smith of Wellington, FL and her own Ocean Mist, who captured reserve champion.

The High Performance Hunter 4′ Division was championed by Jennifer Hannan of Wakefield, RI and Flamingo-K, owned by Equinimity LLC, who edged Gabrielle Strigel of Durham, NC and Cosmeo, owned by DK-USA Sporthorse, LLC, who took reserve.

Morgan Ashby of Licncolnton, NC and her own Beatrix Potter finished atop the Medium Pony Hunter Division while Helena Tourville of Milton, GA and Olympian’s Dainty Rose, owned by Emma Madison, earned reserve champion in the division.