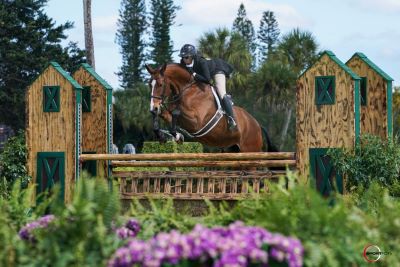 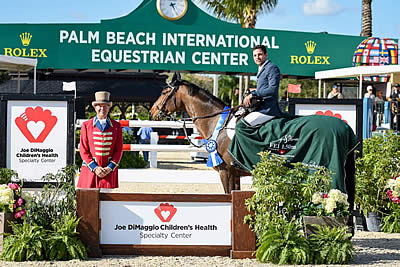 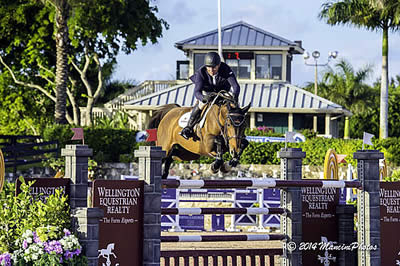 Catsy Cruz of Mexico has been the course designer for international jumper competition all week and concluded with a challenging track for Sunday’s exhibitors. Fifty entries showed in round one with 17 clear rounds to advance to the jump-off. The riders were given an option to jump immediately following their first round or wait until the end of the first round to jump-off, and although several chose the immediate option, there were no double clear rounds until the end.

“He is a speed machine,” the rider smiled after his win. “He is by Quick Star, and he actually won the seven-year-old championships in Fontainebleau. He is 11 now, so he has always been a good horse. At the 1.45m level he is really fast. He is a little tricky to ride, but always wins a class at most shows that I go to.”

“He is just a typical Quick Star,” Wordley described. “He is mouthy and he hops up and down and bucks halfway through a line. It took me a while to get a partnership with him, but now it has been good. He has won a couple of the $10,000 classes here, and he won in Kentucky and Tryon. He is winning all over the place, so I am really happy to have him as a part of the team.”

Speaking of Sunday’s course, Wordley noted, “I thought it was tricky enough. There were quite a lot in it and there weren’t that many double clean, so it was obviously tricky enough even though it was only 1.40m. I think the triple combination away from the gate caught a few people, and it just took some jumping with all the other jumps.”

“I got to see Abigail and she was really fast, and then Lucas came out and beat her,” Wordley detailed on the jump-off. “I was planning to do one more extra stride to the last jump, so I had to make up a bit of time at the beginning, but he is so fast. It is hard to judge how fast you are actually going. I didn’t plan on being two seconds faster because it was already a fast class, but it just happened that way. He is so fast at turning, and he is so quick. He is an amazing horse.”

Wordley looks forward to the winter season in Wellington and will continue aiming Popstar Lovonais at the 1.45m world ranking classes throughout the circuit.

Also showing on Sunday afternoon, Tiffany Morrissey jumped to victory in the $5,000 USHJA National Hunter Derby aboard Eastwind Farms LLC’s Belucci. In the two round competition over a course set by Danny Moore, Morrissey and Belucci finished with a 168-point total with scores of 81 and 87. Molly Ashe-Cawley and Greer Hindle’s Freedom finished second with scores of 88 and 77 for a total of 165. Hellen Voss guided Mark Bone’s Cashmere to third place honors with scores of 80 and 83 to total 163.

Belucci is a seven-year-old Dutch Warmblood gelding (by Tenerife VDL) that Morrissey first started as a pre-green horse this year.

“We showed all summer and now he is going to do the First Years,” Morrissey detailed. “He has done derby classes before. He won in Lake Placid. He was first and second in Lake Placid and now he won another one.”

“He is a good jumper,” Morrissey described. “He is scopey, which is nice because you can always jump the high options. He is big-strided, so he is really good in the handy normally. He is a good boy.”

The rider spoke about each of her rounds with Belucci, stating, “Round one he was good. He rubbed one, so my first round score wasn’t quite as good as I would have hoped, but in the handy he was super. He was great in the second round.”

Morrissey and Belucci will now take a couple weeks off before returning to compete this winter, where Belucci will move up to prove himself in the First Year Green Working Hunters as he continues to develop.

ESP’s Holiday Show Series continues through January 4 featuring top hunter/jumper competition at the world-class Palm Beach International Equestrian Center. The competition serves as a precursor to the 2015 Winter Equestrian Festival, which begins January 7 and runs through March 29, featuring 12 weeks of competition and awarding over $8 million in prize money.