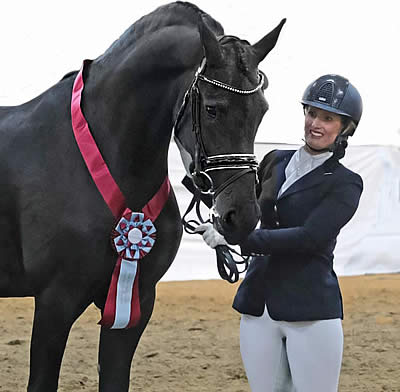 This year the Cup went to Tessa KCF, Star. Tessa is by Brend 413, Sport out of Yve, Star (by Sibald 360).  The 4-year-old mare scored an impressive 82 points to receive the championship. “We were elated!” Jack Vanderkooy, Tessa’s breeder, said of the award. “We were confident halfway through the test that she would do well, but when the judge announced her total score of 82 points, we were thrilled beyond measure.”

The IBOP test is a dressage test of all three gaits and includes serpentines and medium gaits. “I always recognized that Tessa was the mare in the field to do the most frolicking, like she enjoyed being athletic. During the test, she really showed off her suspended and elastic [gaits],” Vanderkooy explained. Kevin Brutsche, of Clinton, WA, purchased Tessa shortly before the FHANA keuring.  The mare was ridden by and has been in training with Cecile Von Martels, of Ridgetown Ontario.

Vanderkooy, owner of KCF Farms, has had other mares compete in the IBOP Cup over the years. “We wish to thank Iron Spring Farm for their generosity in offering this rewarding prize each year to the FHANA membership,” he said. Iron Spring Farm began sponsoring the IBOP Dressage Cup in 2010. The Cup recognizes Friesians with serious dressage talent. Prizes include coolers for the Top Five national finishers, as well as $500 to the champion and $250 to the reserve champion.

Tessa’s sire, Brend 413, Sport, also had a successful dressage career. He won through Third Level with scores near 70%, including the GAIG/USDF Region I Third Level Adult Amateur Championship. Brend is by Brandus 345, Sport/Preferent, out Meta Van De Strubbenhof, from stam line 34. Brend’s sons and daughters have won numerous championships and dressage classes.