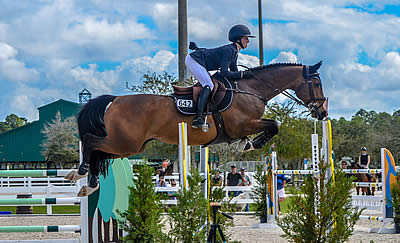 Wellington, FL (February 27, 2019) – Equitation champion and show jumping rising star Taylor St. Jaques and Qantar Des Etisses were untouchable during the February 22 Turf Tour competition, where their double clear and jump-off time of 36.436 couldn’t be matched, despite multiple efforts by exceptionally speedy horses and riders. The Turf Tour, which features weekly venues and show jumping of all levels on all-natural surfaces, returns to the grass Grand Prix field of its hosts’ home farm, The Ridge at Wellington, Thursday February 28 and Friday March 1.

St. Jaques, who splits her time between college and the Florida show season, was fourth to go with her own Qantar Des Etisses in a class of 24 for the $15,000 1.40m Turf Tour Grand Prix on Friday. Attempts to beat her time were marked by unfortunate rails, resulting in a second-place finish for the Wednesday’s Rising Star Classic winners Mark Bluman and Cupfer Cr on a jump-off time of 38.206 seconds. Third went to Steven Bluman and D’Alba R 15 with 38.403.

“Friday was my first time doing the jumpers at The Ridge Turf Tour and it might have been the utmost horse show experience of my entire life,” said St. Jaques, who has titles such as 2017 Dover Saddlery/USEF Hunter Seat Medal Final Champion and 2017 Platinum Performance/USEF Show Jumping Talent Search Finals runner up to her name. “It was super easy to ship in, show, and get back home. There was very little sitting around waiting, which we really appreciated as I only arrived in Wellington at midnight the evening before. Balancing school and showing can be a bit frustrating as I don’t get to be around the horses as much as I’m used to, but this season has been really fun. I hadn’t jumped my horse since late January so I wasn’t quite sure if we were ready, but I think it worked to our advantage. I’ve had Qantar since the summer of 2016 and he is my whole world. He was meant to teach me the ropes of the junior jumpers and together we’ve won more than I thought was imaginable. My goal at The Ridge was to go for a clean round, not necessarily a win, and showing at The Ridge was a fantastic experience.”