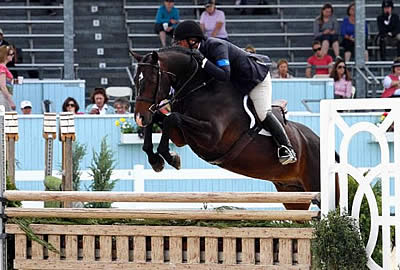 Buffalo, NY – June 3, 2014 – The National Show Hunter Hall of Fame (NSHHF) awarded numerous honors last Tuesday night at their annual dinner held at the Merion Cricket Club in Haverford, PA, but it was Susan B. Schoellkopf who shined. Schoellkopf was named inducted alongside Bruce Duchossois, Brian Lenehan and Jane Gaston. It was an achievement that none can contest, as Schoellkopf has committed her life to providing superior quality to the equestrian community from the show ring to the Buffalo Therapeutic Riding Center (BTRC).

Schoellkopf is not only the Director of SBS Farms, but she has been involved with associations that both govern and promote the horse industry and has been associated with the Buffalo Therapeutic Riding Center and Buffalo Equestrian Center for 35 years. Susie has made SBS Farms, Inc. the premiere show stable in the northeast, training four USEF High-score Award hunters, Gabriel, GG Valentine, Big Bad Wolf and Kansas, as well as the illustrious 2012 USHJA International Hunter Derby Champion Jersey Boy. She currently serves as a USEF “R” rated judge, Chair of the Zone 2 Hunter Committee, is the Pre-Green Incentive Founder and Committee member, and is a member of the USEF Equine D & M Committee. As a rated judge, Susie has judged the New England Medal Finals, the Devon Horse Show, HITS Thermal, the Winter Equestrian Festival, the Hunterdon Cup, Junior Hunter Finals and the USEF Pony Medal Finals. Susie Blaisdell, Jennifer Alfano and Pam Keenan inducted Schoellkopf into the NSHHF, each giving heart felt speeches about her accomplishments.

“All of us believe that Susie truly deserves this honor, as she’s excelled in all areas of the equestrian sport, as a rider, trainer, owner, judge, committee chairman and member and as a constant tenacious promoter of the industry. I think very few horsemen have had such an incredibly positive influence on so many for so long,” Susie Blaisdell said. “Susie continues to give her time, expertise and opinions to promote the growth of the sport. She’s done this by being a USEF R-rated judge at all of the top shows around the country, by chairing and serving on vital USHJA committees and by writing an informative and entertaining column for the Chronicle for years.”

The NSHHF continues to foster the appreciation of the sport through the establishment and maintenance of esteemed awards. The winners of the yearly and overall awards are carefully selected by the vote of trainers who have had champions in the divisions at the shows that have been nominated for the Hall of Fame Horse Show of the Year award.

“Susie is one of the most generous and loyal people that I have ever known,” Professional Hunter Rider and Trainer Jennifer Alfano said. “She’s given so many people a great leg up. I know before I came to work there she supported many young professionals and gave them some great opportunities. Almost 24 years ago, knowing very little about me, she gave me a chance and hired me. We have had an incredible journey since that day.”

Schoellkopf has dedicated her life to the Buffalo Equestrian Center and the BTRC, providing children with the opportunity to ride, who may never have had that chance. The facility’s location in Downtown Buffalo is ideal for many of the inner-city kids to take a bus for their riding lessons.

Alfano elaborated, “Many of these kids in the city would not have this opportunity elsewhere. There’s no agenda here. These aren’t people who will ever go on to spend money. Susie just wants kids involved with horses. It’s not just show kids. Those kids are all so important to her.”

The BTRC has also become a staple in the equestrian world, acting as a beacon of light for many other therapeutic riding centers across the nation. She founded the program in 1990, and it has only continued to grow. Every year the BTRC hosts its Buffalo International Horse Show, raising crucial funds for the therapeutic program.

“Susie has a wide variety of students with many physical and emotional challenges, but the one thing that they all share is their love for Susie,” Alfano smiled. “Every Monday they come running through the door screaming her name. She knows every child in that program. She knows their parents. She knows their siblings. She’s there to cheer them on… Her devotion to that program is truly impressive.”

Schoellkopf concluded the presentation with these sentiments: “Everybody in this room has given me such an amazing ride through this sport. Through the many highs and the many lows, and I am so thankful to have a place in the National Show Hunter Hall of Fame. Most importantly though, I want to thank all of the horses who have crossed my path, who teach me every day why we all do what we do and love each day.”

During the Devon Horse Show and County Fair SBS Farms rode to the top of the leader board with their prestigious mounts. Alfano and Candid collected the third place ribbon in the Green Conformation Model, as well as the first place finish over fences and the third in the handy. During the Second Year Green Working Hunters, Billie Steffee’s Maggie May captured great ribbons, but her shining moment was during the $25,000 USHJA International Hunter Derby. She rode to an impressive score of 176.5 during the first round, and came back in the handy for a score of 193. Their cumulative score of 369.50 earned Alfano and Maggie May the third place award.

Alfano also had the chance to showcase an unforeseen talent during the Five Gaited Saddle Horse Special. She rode Ceil and Kenny Wheeler’s CH Callaway’s Born For This to the first place finish. The pair beat out other internationally acclaimed riders Todd Minikus, McLain Ward, Candice King and Hunt Tosh for the win.

While SBS Farms was busy collecting ribbons at Devon, Alicia Heberle led another strong contingent of horses and riders to top ribbons at HITS-on-the-Hudson in Saugerties, NY. Heberle helped train Alex Trolli and Hey Sailor to the Children’s Hunter Championship during week one of the show, while also bringing home two wins with Del Piero during the second week.

SBS Farms, Inc. now will pack their trunks and head to the long-anticipated Hunter Derby at the Genesee Country Village & Museum June 6-8.

Based out of Buffalo, NY, SBS Farms’ Susie Schoellkopf and Jennifer Alfano run one of the foremost show hunter training operations in the country, and travel nationwide to compete in the nation’s most prestigious horse shows. SBS Farms, Inc. continues the proud tradition of the Saddle and Bridle Club as one of the top show stables in the northeast. Schoellkopf is also the Executive Director of the Buffalo Therapeutic Riding Center, which houses both The Buffalo Equestrian Center as well as SBS Farms. Built in 1922, the 160-stall facility is a historical landmark, with its unique English Tudor and gothic style architecture. For more information on SBS Farms and the Buffalo Therapeutic Riding Center, please visit www.thebtrc.org.

Buffalo, NY – January 1, 2013 – SBS Farms, Inc. exemplified the meaning of victorious during the 2012 year. The team took home top honors at the most prestigious horse shows and events across the nation, with Jennifer Alfano and Jersey Boy rising to the pinnacle of their career with their win at the 2012 USHJA International Hunter Derby Finals in Lexington, KY, in August. Trainer Susie Schoellkopf and professional rider Jennifer Alfano are now gearing up for the 2013 show season, where they will showcase their skills, and those of their students in the hunter and jumper venues.

Last year, Jennifer Alfano and Jersey Boy stole the spotlight during the final week of the Jacksonville Winter Series, held at the Clay County Fairgrounds in Green Cove Springs, FL. The pair rode to the top of the standings during the $25,000 USHJA International Hunter Derby at Jacksonville Winter A to Z. They also took the reserve championship in the High Performance Hunters. Alfano also showed Sharon O’Neill’s Rose Hill to the Second Year Green Working Hunter Championship.

END_OF_DOCUMENT_TOKEN_TO_BE_REPLACED

Buffalo, NY – December 14, 2010 – Susie Schoellkopf of SBS Farms at the Buffalo Therapeutic Riding Center in Buffalo, NY, was honored this past week at the USHJA Annual Meeting, which was held on December 6-9, 2011. Schoellkopf was given the President’s Distinguished Service Award at the USHJA Evening of Equestrians Awards Dinner for the second year in a row.  SBS Farms’ Jennifer Alfano was also awarded at the dinner, as she earned The Rider Recognition Award for 2010.  This award is given for the most money won as a Hunter rider and her cash earnings were just above $400,000.

The President’s Distinguished Service Awards were developed in 2006 to acknowledge and honor the dedication and service of volunteer members to both the USHJA and the sport. 2010 marked the second year for Schoellkopf to win the USHJA’s President’s Distinguished Service Award, as she was also the recipient of this award in 2009. Schoellkopf is the chair of the Open Hunter Task Force and a member of the Hunter Restructure Committee, the Hunter Zone Council, the High Performance Hunter Committee, and the Junior Hunter Task Force. She is also on the USEF Drugs and Medication committee and serves as chair of the Zone 2 Hunter Committee.