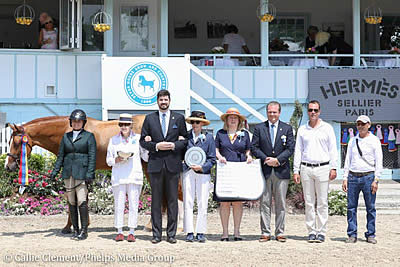 Devon, Pa. – May 29, 2019 – Wednesday at the Devon Horse Show and County Fair saw the return of the highly anticipated Ladies’ Day, along with the presentation of the Devon Grand Hunter Championship, sponsored by Hermès, in the Dixon Oval. Taking home the prestigious honors for 2019 was Victoria Colvin with Brad Wolff’s Private Practice. Colvin also claimed the coveted Leading Lady Rider award to complete the special day in addition to being awarded the Fourth Sally Deaver Murray Memorial Challenge Trophy with Private Practice after their beautiful rounds in the High Performance Working Hunter division.

The Ladies’ Side Saddle division took center stage following the hunters during Ladies’ Day at the Devon Horse Show and Country Fair. The division featured an undersaddle and hunter hack competition, both sponsored by Courtyard by Marriott, as well as an over fences class, sponsored by Lugano Diamonds. Susan Sisco and Ringfort Tinkaturk ultimately took home the championship tricolor and the True Blue Challenge Trophy after earning first place in the undersaddle and in the hunter hack, and second over fences. 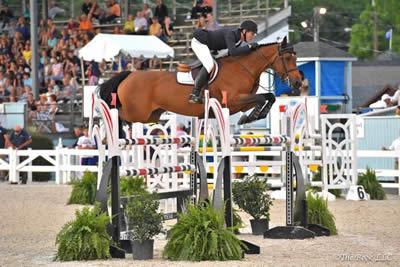 Devon, Pa. – June 1, 2016 – Some might call it luck, some might call it hard work, most would call it both. Whatever it is, McLain Ward has it. Notching his eighth international victory in a row, Ward rose to the top of the field once again, claiming the $40,000 Devon International Speed Stake CSI4* sponsored by Green Drop. Piloting Tina La Boheme to the fastest clear round, Ward once again led the lap of honor in the Dixon Oval at the Devon Horse Show and Country Fair.

“The speed here at Devon has probably gotten more difficult,” said Ward after his win. “Being FEI, you need a little more of a jumper. I thought it was a very good course. Took a little jumping and enough speed. It wasn’t like you could go belly to the ground. You needed to pick a few places to take a moment.”

An international field of entries took their turn over Kelvin Bywater’s track to kick off the evening of competition at the Devon Horse Show, but with a quick pace as the main goal, only 10 riders left all the rails intact in their effort to secure a top ribbon.

As the fourth athlete to tackle the course, Amanda Derbyshire of Great Britain set the pace to beat at 60.29 seconds with a clear round aboard Goldbreaker. With a quick time that left many trying to catch her unsuccessfully, she took home the second place prize.

When discussing how she might have won, Derbyshire admitted, “I chipped really bad at the fifth jump. I did not see that distance. Goldbreaker jumps back feet first, but he’s brave and he’s a good boy. It felt like a win anyway if McLain won! I knew he was going to beat me. I was on the fence waiting for him to beat me.”

Ireland’s Kevin Babington was one of the select few to come close to the 60-second mark, stopping the clock at 60.30 seconds with his veteran partner Mark Q for third place. Sydney Shulman riding Toscane De L’Isle and Laura Chapot on Quointreau Un Prince finished fourth and fifth, respectively, with clear times of 61.31 seconds and 61.92 seconds.

The last in the class would prove to be the best of day. Ward and Tina La Boheme executed a flawless performance as they took the inside options to beat Derbyshire by almost two seconds as they dashed across the finish line in 58.49 seconds for his second victory at the Devon Horse Show.

“I did the plan,” explained Ward after seeing the others show over the course. “I didn’t do anything really different than the plan. Everything showed up nice. She’s a careful mare, so it worked out.”

With victories at Old Salem, Rome and Devon, Ward has racked up an impressive number of wins in the last three weeks. “I always imagine that, but it doesn’t always go that way,” laughed Ward. “I never try to limit what is possible. Every competition I go in I have a plan and I do the best I can to execute that plan. Sometimes it’s not the win, you know, sometimes it’s to train a horse or learn something or to gain some experience, but if it’s to ride a certain round, you try to execute it and sometimes you get in a nice streak. Like I said last night, I have a lot of really nice horses. The horses make you look good.”

Ward will return to the ring Thursday evening for the $225,000 Sapphire Grand Prix of Devon CSI4*. This time he will be aboard his veteran mount Rothchild, the reigning individual Pan American gold medalist.

“I’m going to go with my best chance,” explained Ward. “Tina is 9, so she’s not experienced. She’s a green horse, and she’s never jumped higher than 1.50m. I think this being a 4* grand prix, it’s a real enough test. Tina will have a nice, easy couple of days, and I’ll show her Saturday night.”

The Devon Horse Show and Country Fair is the longest running and largest outdoor multi-breed competition in the United States. With the grandeur of Philadelphia’s prestigious Main Line setting the stage, the event features a world-class field that annually ranks among the most prominent internationally. The event also includes the Country Fair that offers world-class shopping, rides and games for kids, multiple dining options and special entertainment events.

As the professional hunter divisions came to a close at the Devon Horse Show, Scott Stewart ended up on top to claim the Devon Grand Hunter Championship aboard A Million Reasons.

“I had hopes for A Million Reasons, to be honest,” Stewart said. “She’s been pretty consistent. This is only her third horse show of the year. She was champion in WCHR week in Florida, then we did Kentucky, and she was champion, then we came here.”

Despite the light show schedule, A Million Reasons came ready to win. At home, Stewart prepared the mare by jumping her around a four-foot course a few times in the weeks before Devon.

“She likes a light schedule,” Stewart said. “She’s a mare, but she doesn’t really act mare-ish. She’s almost more like a stallion. She’s a little lazy off your leg. The hardest part is having her focused on what she’s doing because it’s easy for her. She rides like she’s 18h, and she’s only 15.3h. Her style is just to go with her head and neck out.”

In addition to the championships, Stewart accumulated enough points to earn the Leading Hunter Rider award for the eleventh time, while A Million Reasons also took home the Leading Mare Award,

“It always feels great to win,” Stewart said. “Devon is a special show for me. It’s huge with tradition. It’s always a great thing to win here. I try to think less and less about getting the Leading Hunter Rider award because it makes you crazy, but it’s always a thrill to get it.”

Dr. Parker, proud owner of A Million Reasons, said the little mare keeps everyone laughing with her charming personality.

“Scott and I collaborated on her, and we really thought that he was the kind of ride for that mare,” Dr. Parker commented. “We felt that she required a certain sensitive temperament of a rider in order to get the best out of her. She’s emotionally complicated. We laugh about her a lot because she has a lot of opinions.”

Another one of Dr. Parker’s talented hunters, Cold Harbor, took home the championship in the Regular Conformation Hunter division with rider Hunt Tosh in the irons.

Tosh said Cold Harbor, who goes by Larson at the barn, is his horse of a lifetime. The talented gelding also earned the championship in the Regular Conformation Hunters at Devon last year.

“He has just been incredible,” Tosh said. “He’s such a classic hunter. Betsee has been so gracious, and she’s such a wonderful owner for us. He was great all week. He’s one of the best feelings to ride, and just to have a horse like that… so beautiful, a wonderful mover and can jump and all that… he’s truly what you look for in a hunter. He’s proven to us that when it counts, he tries to win.”

Dr. Parker added, “Cold Harbor has broken all the records for Regular Conformation Hunters in this country that can be broken. No horse in history has won it more times than he has. He’s a very mannerly, good-tempered, kind, generous horse in every way. He’s a real, true dream horse.”

Even Tosh’s 9-year-old daughter, Maddie, loves Cold Harbor. Dr. Parker and Tosh plan for Cold Harbor to be Maddie’s Junior Hunter when she is ready to compete in the division.

The division’s reserve championship went to Kelley Farmer and Baltimore.

Continuing the hunter action at Devon, the feature $25,000 USHJA International Hunter Derby will take place on Thursday. The final highlight event during the Devon Horse Show and Country Fair will be the $225,000 Sapphire Grand Prix of Devon CSI4*, which takes place on Thursday evening.

For Susan Sisco, being in the winner’s circle is not unfamiliar territory. The skilled rider and trainer has won the Ladies Side Saddle championship tricolor many times at the Devon Horse Show and Country Fair. This year, the victory was aboard an 11-year-old Irish Sport Horse that goes by the name of Ringfort Tinkaturk and is new to the side saddle division.

“He does a little bit of everything,” owner Barbara Wanamaker said. “I’ve only had him since April. He was an event horse. It’s only his third horse show and second sidesaddle show. Susan trains him.”

Wanamaker competed in the side saddle division, as well. While Sisco took control of the reins on Ringfort Tinkaturk, Wanamaker rode her other horse, Between the Lines. The two have been friends and sharing a passion for horses and side saddle for over two decades.

“Susan and I have known each other for over 20 years,” Wanamaker added. “After that long you become family.”

Side saddle competitors showed off their skills in a hack and in an over fences class during the day on Wednesday, then returned under the lights Wednesday evening for an under saddle class to complete the division. Sisco locked in a six-point advantage in the division after securing two blue ribbons and a fourth-place finish to ride away with the True Blue Championship Trophy.

Side saddle has been a part of the Devon Horse Show tradition for as long as anyone can recall. The style of riding was first introduced in Great Britain by Anne of Bohemia in 1382, at the time of her marriage to King Richard II. It introduced a more independent way of travel, since travel was primarily through cart or carriage then.

Breed specialty classes began competing in the Dixon Oval on Wednesday and will continue throughout the week. Thursday evening’s highlight event will be the highly anticipated $225,000 Sapphire Grand Prix of Devon beginning at 8:00 p.m. featuring some of the sport’s top athletes.