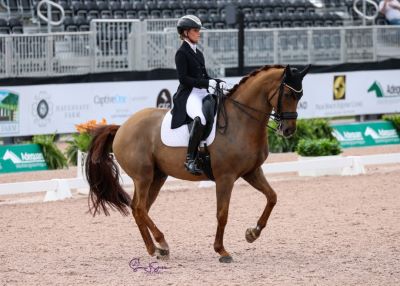 Week 3 of the Adequan® Global Dressage Festival (AGDF) continued this weekend, with a victory for France’s Morgan Barbançon and her own Habana Libre A in the FEI Grand Prix Special CDI4*, presented by Palm Beach Equine Clinic.

Barbançon’s 74.404% performance aboard the Dutch Warmblood gelding by Zizi Top marked the pair’s highest Grand Prix Special score to date. At 11 years old, Habana Libre A was the youngest horse in the class. The pair finished more than three percentage points clear of second-placed Anna-Christina Abbelen (GER), who rode her own and Silke Abbelen-Mooren’s Sam Donnerhall to 71.234%. Spain’s Pablo Gómez Molina claimed third on the 13-year-old PRE gelding Ulises De Ymas with 69.915%.

“I’m super happy,” said the 30-year-old Barbançon, who is competing at AGDF for the first time. “I’m on cloud nine. Honestly, I thought we would get a 72% or maybe 73%, and I would have been super happy with that. Today, I had such a floaty, fluid ride, and I didn’t push.”

“It’s a great division,” enthused Tarjan, who rides as an amateur. “I’ve been here the last three years and it’s a super way to get the greener horses into the CDI stadium and in front of the CDI judges without the pressure of a CDI.

“Summersby is a really great horse, and only eight years old. I’m just happy that she stayed with me through the whole test. The horse has to get stronger in the work, but she’s really honest and the atmosphere didn’t seem to affect her at all.”

In the CDI3* FEI Grand Prix Special, presented by ProElite®, Great Britain’s Susan Pape and Harmony’s Eclectisch notched up another victory, adding a 70.021% win to their blue ribbon in the qualifying Grand Prix class.

“Our ride felt nice and powerful today,” said Pape. “Unfortunately, I had a mistake in the twos and the ones on the centerline. But other than that, it was very good. The passage on the left lead was very good for him and expressive. In the canter work, the ones were beautiful, and so was the extended canter.”

Pape and the 14-year-old Dutch Warmblood stallion by Zenon, owned by Pape and Harmony Amateur Sports Foundation, have been partnered for a few years, and she reflected on what taking the ride over on the well-trained horse has been like. 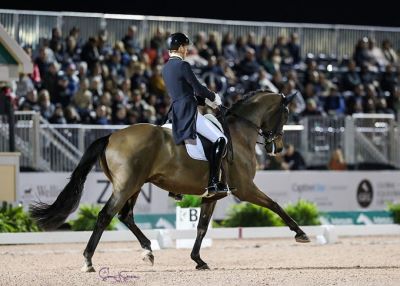 “I am very happy today,” beamed Wandres, who is based in Germany at Hof Kasselman but is a seasoned competitor at AGDF. “This is the first time for me this season under the lights and I am always looking forward to coming back. I was a little nervous about how it would go because with this special atmosphere, you never know how the horses will handle it, but Bluetooth took it in a positive way. I had a much better feeling than in the Grand Prix; he was way fresher and forward, and it felt like one of the best tests that he has offered me.”

AGDF regular Susan Pape (GBR) topped the ProElite CDI3* Grand Prix earlier in the day, riding Harmony’s Eclectisch to 70.826%. The 14-year-old stallion received a smattering of eights throughout the test.

“I think the extended canter was pretty good,” enthused Pape, who is based in Germany and is riding at AGDF for the eighth time. “His pirouettes were very nice, his twos were very nice, and all of his canter work is a highlight.”

Pape, along with her sponsor Harmony Sporthorses, bought the son of Zenon x Olivi when he was a rising eight-year-old.

“He was owned by a Swedish woman [Ida-Linn Lundholm] who competed him in the World Championships for young horses’ level, where he was very successful,” explained Pape, who usually produces horses up the levels herself. “At that time, we were looking for an upcoming Grand Prix horse. This time my sponsors wanted to buy me this nice horse. He’s been here [at AGDF] almost every year since then and started here in the Prix St. Georges, and we worked our way up to the Grand Prix.” 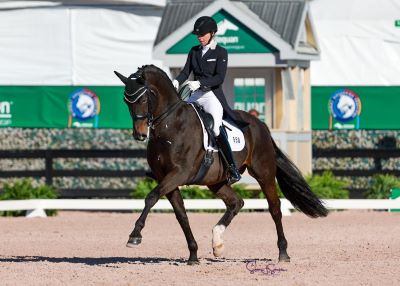 Wellington, FL – January 29, 2022 – Week three of the 2022 Adequan® Global Dressage Festival (AGDF) in Wellington, FL continued to bring out personal best performances despite unusually cool and windy conditions. The day’s top class, the Grand Prix Special CDI4*, presented by Harmony Sporthorses, was a tussle between the on-form Susan Pape (GBR) and the seven-time Swedish Olympian Tinne Vilhelmson Silfvén. The judges found them hard to split, with two favoring Vilhelmson Silfvén and three putting Pape in the lead, with a final score of 72.341%. Ultimately it was Pape and Harmony’s Eclectisch who triumphed after an error of course and moments of tension capped Vilhelmson Silfvén’s score on Devanto to 70.660%. USA rider Susan Dutta rounded out the podium with 68.787% on Figeac DC.

Pape posted yet another personal best with her own and Harmony Amateur Sports Foundation’s stallion Harmony’s Eclectisch, having already done so in her qualifying grand prix. Before this week, the son of Zenon had not won a CDI test at Grand Prix level, but he was on top form to take two winner’s rugs in AGDF 3.

“I thought the test today was really good,” said the 60-year-old. “Eclectisch gave me a really good feeling. He was really in front of me and focused. I had one little hiccup at the end of the two-tempis, but that’s always the rider. He was really super.”

Lots of eights on Pape’s score sheet throughout the rest of the test helped keep the score buoyant despite the mistake.

“He has fluid half-passes, he has very good canter work, and expressive passage,” she enthused of the 13-year-old, whose next show will be the five star in AGDF 7. “The piaffe is maybe his weakest point at the moment, but he’s still maturing and getting there. He’s built quite upright; he’s a typical Dutch horse with a high neck and that’s the way he goes.”

Pape made it five wins from five starts with her two horses across AGDF 3.

“This was such an incredible week for me, quite amazing,” she said. “It’s never happened before, not that I can think of. It’s been really wonderful, and also really nice being able to ride with people in the grandstand.”

Her other win on Saturday came courtesy of Harmony’s Giulilanta in the Intermediate I CDI1*. A test peppered with eights helped hand victory to the 11-year-old Jazz daughter whom Pape co-owns with Harmony Amateur Sports Foundation. 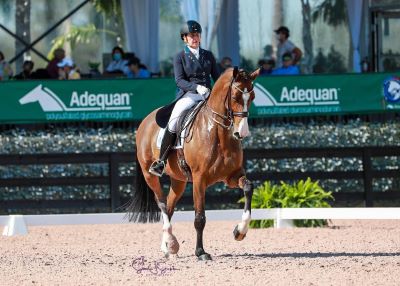 Wellington, FL – January 15, 2022 – The seven-time Swedish Olympic rider Tinne Vilhelmson-Silfvén took home the winner’s blanket and sash in the Grand Prix Special CDI4*, presented by Palm Beach Equine Clinic. Riding Lövsta Stuteri’s 13-year-old Devanto, Vilhelmson-Silfvén logged a new record score for the Holsteiner gelding at the level – 73.425% – despite a blip in the first set of one-time changes. Overall, they were rewarded with a smattering of eights in the test and a nine for extended canter. Runner-up spot went to Susan Dutta (USA) on her own and her husband Tim’s 13-year-old gelding Figeac DC with 68.596%.

Devanto was formerly campaigned at Grand Prix by Germany’s Juliane Brunkhorst. Vilhelmson-Silfvén did her first CDI on him at AGDF exactly a year ago, and this was their eighth CDI test.

“It’s a gift to get a ready-made horse,” said the 54-year-old Vilhelmson-Silfvén. “But that’s not to say it’s easier, because you really have to make them your own. You have to learn how they work, and they have to learn how you work. You have to give them time to understand you. I get to understand how a horse like Devanto – with all this power – how he reacts, if he reacts, if he’s too tense, or if he’s over ambitious. He’s very sensitive, and I like that.”

It was the final competitor in the Intermediate I CDI1*, Susan Pape, who swept the class with a unanimous first place from the five judges. The British rider, 58, rode Harmony Sporthorses’s 11-year-old Jazz x Flemmingh mare to 72.265% at only the pair’s second international show together. They had more than 2.6 percentage points in hand over second-placed Shannon Dueck (CAN) on As You Wish.

Christina Vinios rode Deauville in the pair’s first international show to a winning 66.265% in the FEI Intermediate A CDI2*. Five Rings Farm’s 18-year-old Oldenburg gelding is by the De Niro son Del Gado and out of a Gervantus I mare.