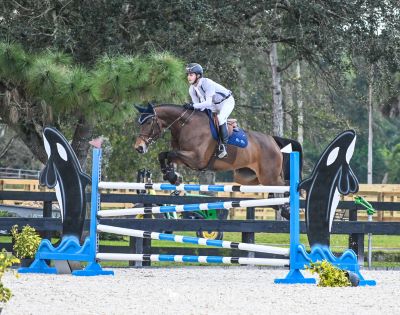 Loxahatchee Groves, FL (January 17, 2023) – Venezuela’s Luis Larrazabal and Leeann Albin’s mare Baroness are the first Grand Prix winner of the 2023 Surf Tour season. The pair bested a class of 16 over the course designed by Hector Loyola.

A passing cold front unleashed wind and rain to start off The Ridge’s first $15,000 Grand Prix of 2023, but the uncharacteristically cold and wet weather did not dampen the spirits of its riders, which persevered in both of The Ridge’s two rings of competition. Despite a hard downpour, the newly installed Premier Equestrian ProTex Footing remained ideal for jumping. The Ridge’s Grand Prix course was a welcoming track that included a skinny bicycle jump, three double combinations, and a liverpool oxer as the final fence, to keep competitors on their toes.

Larrazabal and Baroness were the second to last to go, and set out to contest the leading times set by the historically speedy Daniel Bluman of Israel and Ireland’s Jordan Coyle. But Larrazabal and Baroness were not to be intimidated, and delivered an amazing double clear effort to top both of his competitors, crossing through the jump-off timers in 32.746 seconds. Coyle finished second and third aboard Costa Diem (34.422) and Eristov (34.658) while Bluman took fourth aboard Ubiluc with a jump-off time of 34.662. 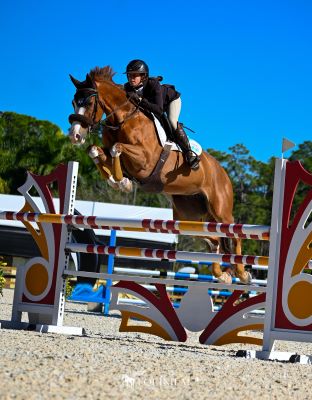 Loxahatchee Groves, FL (January 12, 2022) – Ali Wagstaff and Great Thing delivered great rounds this Wednesday during the first official day of competition on The Ridge at Wellington Groves 2023 Surf Tour. The pair cruised to a double clear effort over a course set by Hector Loyola to win the $5,000 1.30m Rising Star Classic at The Ridge’s Level 2 Jumper event, where .8m-1.40m classes run Wednesday-Friday at The Ridge’s newly renovated 20-acre facility on the corner of E Road and Okeechobee Boulevard.

Wagstaff and Mill Pond Farm, Inc.’s Great Thing narrowly edged out Luis F. Larrazabal aboard Leeann Albin’s Baroness in the jump-off to secure the victory. Sabrina Lefebvre and her own Happy Melody De La Defliere had held the lead most of the day before Wagstaff’s effort. Larrazabal and Baroness’s run bumped Lefebvre to third but wasn’t enough to catch Wagstaff and Great Thing.