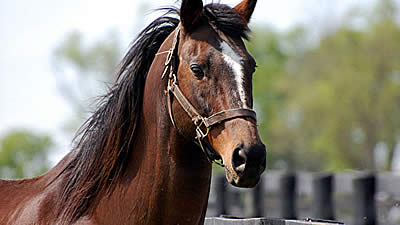 GEORGETOWN, KY – MAY 8, 2020 – On Saturday, May 9, 2020, the featured stakes at Florida’s Gulfstream Park will be the Sunshine Forever Stakes, a tribute to the champion grass runner who was the first stallion retired to Old Friends, the non-profit Thoroughbred retirement facility based in Georgetown, KY.

The son of Roberto out of the stakes-placed mare Outward Sunshine (by Graustark), Sunshine Forever was bred and raced by John W. Galbreath and his Darby Dan Farm and trained by John Veitch.

In 1988, as a three-year-old, the talented colt turned in an Eclipse Award winning season, capturing five graded stakes wins, including three Grade 1 stakes in an eight-week period: The Man O’War, the Turf Classic, and the Budweiser International.

Favored to win the Breeders’ Cup Turf, he finished a game second to Great Communicator in what may be one of the most exciting races in the history of the sport.

Following his racing career Sunshine Forever stood stud in Japan from 1990 to 2004, at which time he was repatriated to the United States by Old Friends, and was among the organization’s first pensioned stallions. 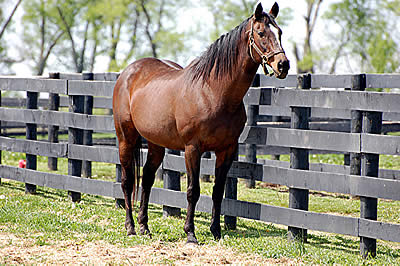 GEORGETOWN, KY – JANUARY 7, 2014 – Sunshine Forever, the 1988 Eclipse Award Turf Champion, died January 7 at Old Friends, the Thoroughbred Retirement farm in Georgetown, KY.  The 29-year-old stallion was discovered in his paddock at dawn today and a necropsy will be performed to determine the cause of death.

The son of Roberto out of the Graustark mare Outward Sunshine, Sunshine Forever had been pensioned at Old Friends since his return to the United States in 2004 from stud duty in Japan.

“Our foundation stallion, the Eclipse Award winner who we brought home after his breeding career was over, is dead, and there’s nothing much more to be said,” noted Old Friends founder and president Michael Blowen. “I don’t think I’ve ever been sadder.”

In 1988 the 3-year-old Sunshine Forever captured fived graded-stakes wins, including a trio of back-to-back GR1 victories in the Turf Classic, the Man O’ War, and – in an impressive fight to the finish – the Budweiser International.

A favorite in that year’s Breeder’s Cup Turf, he narrowly missed the win, coming in second to Great Communicator, but he was nevertheless honored as 1988’s Eclipse Turf Champion.

The bay colt ended his career in 1989 with 8 wins from 23 starts and track earnings of over $2 million.

“I want to thank everyone who ever fed him a carrot or petted him or bet on him or bred to him or just smiled when they saw him,” added Blowen. “You are the ones who had the privilege of knowing how extra special he was in a very special place.”