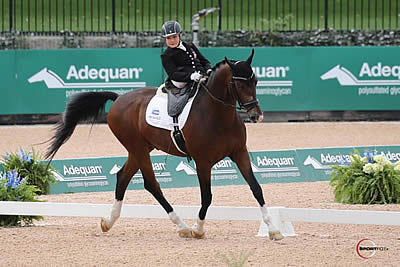 The 24-year-old European champion, who was born without legs, continued a memorable year by taking Grade II Individual honors ahead of prolific medal-winning Austrian Pepo Puch.

There was disappointment for Great Britain’s Sir Lee Pearson, though, who needs one more medal to become the most decorated Para-Dressage rider in FEI World Equestrian Games™ history, as he retired his new ride, nine-year-old mare Styletta, two-thirds of the way through his test.

Kaastrup said, “I was upset because of a mistake I made because the horse was feeling amazing and doing such a wonderful job, but still it was enough [to medal] and it didn’t matter in the end. I was so nervous looking at the scores as it was so close all the way through, and I wondered if we were going to make it. My horse is really enjoying it, and as soon as we got into the arena his ears were like ‘hey, I’m here, is everyone watching me’? He is a darling.”

The Adequan® Para-Dressage program began with a thrilling Grade IV competition that saw the three medallists separated by just 0.781%, with the Netherlands’ Sanne Voets taking gold.

Voets, who won a freestyle Gold and two Silvers at the last FEI World Equestrian Games™ in France four years ago, led from a number one draw on Demantur N.O.P. as their score of 73.927% edged out Brazil’s Rodolpho Riskalla and Don Henrico (73.366%), with Danish rider Susanne Jensby Sunesen third aboard CSK’s Que Faire (73.146%).

“Nobody wants to be the first to go, but it doesn’t change the job,” Voets said. “You just have to do what you do and do it best. I think we smashed it.”

Riskalla’s life was turned upside down in 2015 when he contracted bacterial meningitis on a trip home to Brazil from his Paris base following the death of his father, and he had to have both legs amputated below the knee, in addition to losing his right hand and two fingers on his left hand.

Reflecting on his test, Riskalla said, “It was super. His style sometimes can be super-sensitive, but he performed just like he was at home.”

Grade V action concluded the opening day, and there was a victory for Britain’s Sophie Wells, riding C Fatal Attraction.

As with Voets, 28-year-old Wells went first in her class, and she delivered a commanding performance to finish on 75.429%, beating the Netherlands’ Frank Hosmar and Alphaville N.O.P. on 73.167%, with the bronze medal going to Belgium’s Regine Mispelkamp and Look At Me Now on 71.452%.

Wells, a mainstay of Britain’s dominant Para-Dressage team, won the world individual title at Kentucky in 2010, and three medals at the 2014 Normandy FEI World Equestrian Games™ including team gold.

“I am really pleased,” she said. “I had a little bit of a blip at the beginning where he was just a bit nervous, but compared to last year at the Europeans where the first day was the individual and he was a bit nervous there, he was so much better here and came back to me and built his confidence back up.”

The score for the horses decided first and second place, with Swiss gelding Rayo de la Luz getting an average of 8.3. Germany’s Danny Boy Old collected 8.11 from two of the eight judges whose task it is to solely assess the horses’ performance.

“With four years of vaulting under his belt, we [have been] vaulting him since two years and he has developed fantastically,” said lunger Monika Winkler-Bischofberger on the 13-year-old gelding.

“The horse and the lunger were amazing,” the vaulters raved afterwards. “That was the best it has gone all year and it is great to be on home turf.”

Fifth-placed Italy had a bad start when going over time and therefore the last movement was not scored.

“That was not our best compulsory, but we are better in the Freestyle anyway. We are Italians!” said Laura Carnabuci, lunger for former dressage horse Hot Tek Date.

The confrontation at the top of the field of eleven teams even goes down to a personal level, with Swiss lunger Monika Winkler-Bischofsberger and counterpart Patric Looser for Germany originally coming from the same club in Switzerland, in Luetisburg near the city of St. Gallen.

“It is a friendly rivalry between us, but we both treat it as a fair competition. I wished Monika lots of luck back at the stables before we started out,” said Patric Looser, who won the individual World championship title at WEG 2010 in Kentucky for Switzerland and founded the German team based in Cologne three years later. He still carries a Swiss passport.

“But I am at home there now. And vaulters are one big family anyway,” Looser said.

Austria’s Katharina Luschin scored 8.506 in the Christie’s International Real Estate’s Vaulting discipline at the FEI World Equestrian Games™ Tryon 2018 on Tuesday, thus topping the winning compulsory result from the previous WEG in France. All three Austrian female competitors are in the top four spots with Germany’s Kristina Boe wedged in between on second position (8.347).

“It was a super feeling to go in here. I just did my thing, but I never thought this result could be possible,” said leading Luschin after the first of three more rounds to come towards the individual title. The 26-year-old is at her second WEG, after finishing 4th individually in Normandy and taking Bronze at the previous World Championship in Le Mans 2016.

With Daniela Fritz on 8.294 in third place and 23-year-old Lisa Wild sitting fourth, Austria has set a solid foundation for their road to medal success.

“We took a risk, putting all three of them on this one horse, Fairytale, but it worked out,” said Manfred Rebel, team chief for Austria.

“The higher the pressure, the better I do,” said the 32-year-old trauma surgeon.

The top ten female vaulters of 30 in total all scored above 8.0, showing the new class of the sport.

The placing also shows how tight the competition at the top has developed. Germany places all three female vaulters in the top ten, with Sarah Kay and Janina Derks trailing Boe in sixth and seventh place.  Switzerland has Nadja Büttiker, Marina Mohar and Ilona Haennich placed in a row up to currently rank 11th.

World’s No.1 Anna Cavallaro, silver medalist at WEG 2014, is sitting with Derks on 7th place. The medical doctor is known for her freestyle abilities.

The compulsory was the second appearance for Brüsewitz on Danny Boy Old after he had competed within the team in the morning.

“The double burden does not phase me. I am used to it. It is like that since two years,” said the 24-year-old who comes from a vaulting family. Danny Boy got out much fresher the second time and helped Thomas to a good score after he had to be on as the first vaulter this morning because he knows the horse best and could set him up for the others in the team,” said lunger Patric Looser.

Jannik Heiland, twice an FEI World Cup™ Bronze medal winner, might have lost the lead in the first part of the compulsory, he acknowledged. “The scissors could have been a bit better, but the rest went okay. I felt very well-prepared and was mentally up to it,” Heiland said

France’s Lambert Leclezio, the 21-year-old World Champion 2016, had to go out first. His 8.440 average was the lead until Brüsewitz performed.

World’s No.1 Jannis Drewell from Germany sits fourth, competing for the first time without his mother at the lunge line. He opted for Lars Hansen and experienced Feliciano 44 instead.

“We did not want to overstrain our young horse at this world championship level,” said Drewell, who serves in the German military and devotes his time professionally to vaulting.

The surprise of the day was young Juan Martin Clavijo from Colombia, scoring 8.146 and finishing within the top six vaulters out of 19 who finished above 8.0. The 18-year-old is one of only around 150 vaulters in Colombia. After he had finished school near Bogota in June, he is now preparing for a year in Switzerland and spends his time either vaulting or learning German.