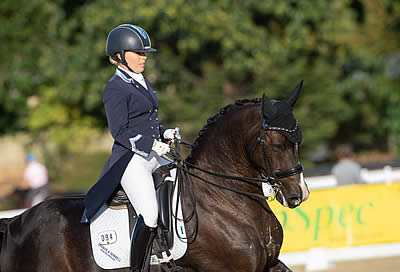 Following the announcement of ‘Dressage Unwrapped’ which takes place at Olympia, The London International Horse Show on Monday 16 December, Paralympic champion Sophie Wells MBE and renowned dressage judge Stephen Clarke are the latest stars to be unveiled to take part.

Sophie and Stephen will join other celebrated dressage personalities, including Carl Hester, Gareth Hughes, and Richard Davison as they unwrap the secrets of the discipline of dressage. The brand-new ninety-minute session will take place at 4pm on the opening day of the Show and provide a unique insight into the sport, from training and producing dressage horses to competing on the world stage.

Sophie Wells MBE, a double Paralympic gold medalist as well as multiple World and European champion, will be taking to the saddle to demonstrate various dressage elements, from the basic movements to the more complex components of championship tests. Sophie will be joined in the arena by Stephen Clarke, widely regarded as one of the best international dressage judges on the circuit, as he talks the audience through what he is looking for from horse and rider during a test and the main considerations when scoring each of the movements.

Stephen’s experience in this field is second-to-none, with previous roles including President of the Ground Jury at the London 2012 Olympic Games and FEI Dressage Judge General, which involves creating and coordinating discussion among international judges to ensure equality and uniformity across the sport.

Olympia Show Director, Simon-Brooks Ward, said: “We’re delighted that Sophie and Stephen will be joining the high-profile team set to be part of Dressage Unwrapped. Their experience and talent are world-renowned, and their participation will significantly enhance the programme, providing an unprecedented insight into competitive dressage.”

Dressage Unwrapped is part of the evening performance at Olympia, The London International Horse Show on Monday 16 December, which also features the FEI Dressage World Cup™ Grand Prix, as well as numerous international display acts, including The Musical Ride of the Household Cavalry and spellbinding horseman Jean-François Pignon.

Lausanne (SUI), 23 January 2013 – Stephen Clarke, the British judge who acted as President of the Ground Jury at the London 2012 Olympic Games, has been unanimously elected as FEI Dressage Judge General. He was elected to the post by the 5* Judges present at the annual FEI 5* Dressage Judges seminar, which was held in Paris 20-22 January.

Clarke succeeds Ghislain Fouarge (NED), who became the first Dressage Judge General when the post was created in 2011. Fouarge had opted not to stand for re-election for a second two-year term.

“We are very much looking forward to working with Stephen Clarke in his new role as Dressage Judge General,” said Trond Asmyr, FEI Director Dressage and Para-Equestrian Dressage. “He is a first-class judge and a natural communicator, so he fits the job description perfectly.

END_OF_DOCUMENT_TOKEN_TO_BE_REPLACED

London Olympic Ground jury President and FEI ‘O’ Judge Stephen Clarke is the guest this week as we find out more about this popular judge. Take a listen right here…