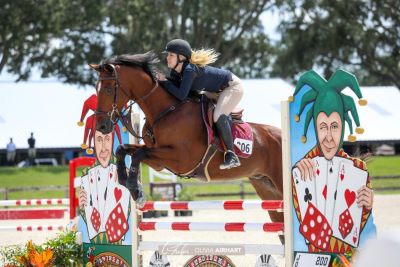 Tampa, Fla. – Sep. 4, 2021 – The penultimate day of competition at the 2021 Southeast Medal Finals focused on fun as horse-and-rider combinations took to their respective rings for unique feature classes prior to the highly anticipated Finals Sunday, September 5. Show jumping riders dashed for the cash hoping to pocket the largest portion of the prize in the $2,000 Gambler’s Choice, presented by The Adams Group eXperience of eXp Realty. Stephanie Cook and Lord Arthur 1916 turned and burned in the Grand Prix Ring claiming the top prize, while Gretchen Swanson, Macie Sousa, and Mina Godden put forth their best collective efforts to win the Equitation Team Challenge, presented by Tenney’s Custom Saddlery.

Eager horse-and-rider pairs lined up at the Grand Prix Ring in hopes of gathering the most points to win the $2,000 purse. Open to riders of all ages and levels, competitors were allotted 50 seconds to forge their own path around the course with the goal of racking up the most points. With each fence assigned a point value based on the degree of difficulty, riders were able to jump a fence no more than twice and in either direction. It was ultimately Cook who took home the grand prize aboard one of her three mounts entered in the class, Lord Arthur 1916, Lionsway Farm’s 13-year-old Holsteiner stallion.

With the advantage of planning and executing multiple courses, Cook’s first trip aboard Vulco Monaco briefly held the lead with a score of 990. The Tennessee native laid down her winning round as the middle of the three trips with Lord Arthur 1916, scoring a whopping 1260. Her final round aboard Augusto produced a score of 1110, which would be good enough to take fourth place. The highly competitive amateur is a frequent competitor on the East Coast circuit and has racked up countless wins. Cook most recently pocketed two blue ribbons at Camp Encour in the $1,000 .95 Mini Prix and the $1,000 .95 Back To The Beach Welcome.

The race for second and third place came down to just a 20-point difference as Juliet Johansson and her own 16-year-old Warmblood gelding, TH Magic, rocketed into second place with a score of 1190. Sitting closely behind was Amy Foster who piloted Abigail Princz’s 11-year-old North American KWPN mare, Florentina HF, to a score of 1170.

In light of the 2021 3’6’’ Equitation Medal Finals Sunday, September 5, the competition took a light-hearted break Saturday evening as teams of four junior and amateur riders teamed up in hopes of turning in the highest combined score. The randomly assigned teams were given 30 minutes to strategize their course prior to the start of the class. A total of seven teams consisting of three junior or amateur riders registered with SEMF contested over either a 2’6” or 3’0” course.

Of the seven teams, it was Gretchen Swanson aboard Dominica V, Macie Sousa with Mojito Z, and Mina Godden with Calino 60 who topped the leaderboard with a whopping score of 234. Godden, the 16-year-old from St. Petersburg, Florida was the first of the three to take to the ring. The experienced ‘big eq’ competitor who qualified for The National Horse Show last year pioneered the track with her own 11-year-old Holsteiner gelding for her two fellow teammates. Laying down a base score of 73, Godden made the wise decision of pushing for a forward seven in one of the bending lines as opposed to the tight eight strides many of her fellow competitors were riding.

Sousa, who just recently aged out of the junior division, was the second of the three to try her hand at the track posting the team’s leading score of 86 aboard her own 10-year-old Dutch Warmblood gelding Mojito Z. The 19-year-old amateur rider from Orlando, Florida, who used to compete on the junior equitation circuit, plans to continue her equitation career as an adult amateur hoping to qualify for the Ariat Adult National Medal Finals.

Sorento, Florida native Swanson was the third and final ride of the three. The 21-year-old amateur rider piloted one of Oakmore Equestrian Center’s lesson horses, Dominica V, around the course earning a score of 75. As the ringer for the team, Swanson’s solid effort aboard Emily Patterson’s 13-year-old Dutch Warmblood mare solidified the team’s top podium position with their combined efforts, a full 27 points ahead of the second place team.