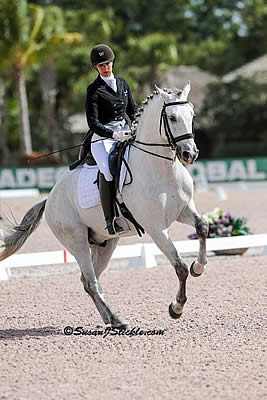 Holmdel, NJ – August 11, 2014 – The mother and daughter team behind Ramanessin are getting ready to return to the show ring for the Centerline Events at HITS Saugerties CDI, Aug. 14-17 in Saugerties, NY. Sonia Zugel, who competes as an amateur for Ireland, and 16-year-old Ashleigh Conroy-Zugel, who competes in the juniors for the United States, have been preparing themselves and their horses for the show with help from trainer Ashley Perkins.

Zugel will ride Afago da Raposa, a 10-year-old Lusitano stallion by Sedutor da Raposa, in the CDI1*. The pair recently prepped for Saugerties by competing at Dressage at Bucks Country Horse Park IV in Revere, PA, on Aug. 3. They won their Prix St. Georges class with a score of 64.737 percent despite bobbles in the tempi changes.

“I was really pleased with the result,” Zugel said. “He came out for his first show since March and did well even with the distraction of a horse neighing to him during his test.”

Zugel has had the stallion for just a year and has geared his training toward building up his fitness for upper level work.

“We’ve been working on getting him stronger,” she explained. “He has a really big trot and an amazing ability to collect. He’s got so much power, and we have to build the strength to match the power.”

Afago da Raposa has been very lightly shown. As a 5-year-old, he won the Brazilian national championship, and that was the only competition under his belt when Zugel purchased him as a 9-year-old.

During the 2014 winter season in Wellington, FL, Zugel competed him in the small tour. They collected numerous wins and top three finishes in Intermediaire I and Prix St. Georges at the competitive Adequan Global Dressage Festival national shows.

Conroy-Zugel will ride Ungaro, her mother’s former small tour mount, in the junior division at Saugerties. With Ungaro, Conroy-Zugel’s partner for her sixth place finish among the top junior riders in the country at June’s U.S. Dressage Festival of Champions presented by The Dutta Corp., preparation is a matter of keeping him happy and fresh coming into the show.

“He knows all of the movements,” Zugel said. “Ashleigh has been working on her accuracy as well as keeping him supple and enjoying his work. We’ve been mixing hill work with ring work to keep his mind fresh.”

Conroy-Zugel will have the chance to test her accuracy beginning with the Junior Team Test on Friday, Aug. 15. The CDI1* also gets underway that day, with Zugel and Afago da Raposa competing in the Prix St. Georges.

To read more about Ashleigh, Sonia and Ramanessin, go to www.ramanessin.com.

Zugel grew up in Ireland and moved with her family to California when she was 18. Based now in Holmdel, NJ, and Wellington, FL, she trains with Vera Barisone (wife of Michael Barisone). In talking about the 16-year-old bay BWP gelding, Zugel said, “We’ve been together for five years and he has brought me from the Third Level up to this so I’m real proud of him. His strengths are his changes and we are getting better at half passing. I’m learning to ride him better.”