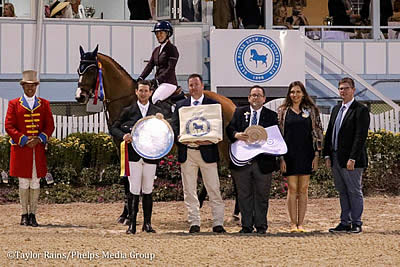 Devon, Pa. – June 1, 2019 – Since Tuesday, international horses and athletes have been competing for valuable points towards the week’s coveted Open Jumper championship, sponsored by Hermès. Following their top performances throughout the 2019 Devon Horse Show and Country Fair, Gochman Sport Horse LLC’s Roulette BH, ridden by Great Britain’s Amanda Derbyshire, and Double H Farm’s HH Azur, ridden by the USA’s McLain Ward, were crowned the 2019 Open Jumper champions and winners of the Little Big Man Challenge Trophy. Both horses tied with 15 points at the conclusion of Saturday’s $72,000 Idle Dice Open Jumper Stake CSI4*, which was won by Derbyshire and Roulette BH.

Saturday evening in the Dixon Oval closed out with several championships in the breed divisions. In the exciting Three-Gaited Park Horse Stake, Smith Lilly and Ceil and Kenny Wheeler’s Extreme Ways took the top spot after impressing the judges with his performance, manners, presence, quality, and conformation against six other competitors. They were awarded the championship cooler, sponsored by Misdee Wrigley Miller, as well as the Betsy Van Duren Memorial Perpetual Trophy. 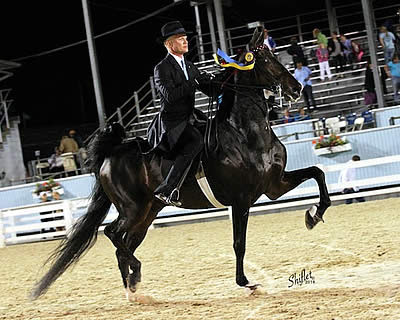 Five-Gaited winner, Central Perk, is a five-year-old gelding by Superb Manhattan. He was a World Champion three-year-old and now mostly shows in the amateurs with his owner, Amy Stinnett. Central Perk qualified for Friday night’s class by showing in the unique Five-Gaited Special that was held Wednesday night. The class brings a group of hunter and jumper riders together to show their skills aboard the gaited Saddlebreds. Central Perk finished fourth ridden by two-time U.S. Show Jumping Olympic Team Gold Medalist McLain Ward leading into Friday night.

“We really just brought him up for the special class, for the celebrity class for the jumper riders to ride the gaited horses, and then we thought, ‘Well, he’s up here. Let’s go ahead and show him,’” Lilly detailed. “I thought he could get a little more seasoning. He’s only been in training with us since January, so I’m trying to know him a little bit more. He’s certainly a quality animal. I thought it would just be a great opportunity to get to know him in the ring a little bit, and then he goes and pulls it off and wins. I was really proud of him.”

Speaking about Central Perk’s big win and the horse’s strengths and best qualities, Lilly described, “He is beautiful, the classic picture of what you want a five-gaited Saddlebred horse to look like. He absolutely just fits the mold. He is beautiful in every way, from the way he is turned out, to his beautiful hair coat and his head and ear. He just looks the part.”

“Beyond that, he has nice motion,” Lilly continued. “He is a square trotting horse. He is particularly classy at the slow gait. We call it a money gait. I knew he would have the best slow gait in the ring. The rack, he’s not the fastest horse yet, but he is younger than most. He is only five years old, and I think he will develop more speed as he comes along. I thought if we didn’t win tonight, it would be because we lacked a little foot speed. I tried to present him in a way where we sort of covered up that weakness as best we could and, fortunately, we were able to pull off the win.”

Lilly grew up in the horse business and has been coming to Devon for more than ten years. It is always a special show for him to compete at, and to have the opportunity to show Central Perk and win the big class was very exciting.

“I have been fortunate to win the gaited stake here one other time,” he recalled. “It has also always been fun to come up here and rub elbows with the big-time jumper trainers and learn what we can learn, and watch people like Guy McLean do their thing. It’s nice to be exposed to some different things.”

Lilly noted that the atmosphere of the Devon Horse Show makes competition even better. “The show horses love this ring, the saddle horses love it. It’s a big, open space to look at, and the crowd is always cheering. We say a cheering crowd makes everything about a show horse get better. We love coming to Devon with nice horses because they always seem to show well here,” he expressed.

Central Perk, named after the coffee shop from the television show ‘Friends,’ is also known as Joey in the barn after one of the show’s main characters. Lilly describes the horse as very “friendly and gregarious.”

“We’ll see if we can build on this experience and move forward,” he stated. “With a young horse, you just want them to keep getting better every show, and I think he’s doing that. Hopefully we can keep him on that path and see how good he can get.”