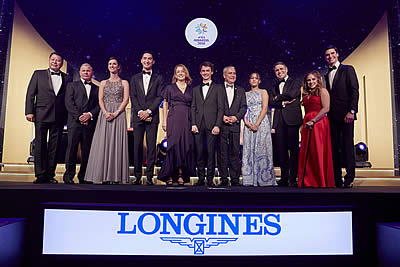 Manama (BRN), 20 November 2018 — Germany’s golden girl Simone Blum (29) has undoubtedly had the best year of her career to date, and she added another accolade to the list, taking home the Fosun Best Athlete Award at the FEI Awards 2018 presented by Longines in Manama (BRN).

Crowned individual world champion and winner of a team bronze medal at the FEI World Equestrian Games™ Tryon 2018 (USA) in September, she became the first woman in the 28-year history of the Games and only the second female athlete in 65 years of the World Jumping championship to win individual gold.

“I am very proud to be the Fosun best athlete. I think it’s a dream of every rider,” Simone Blum said. “A lot of really good riders got it before and to the people I want to say thank you a lot; it was a pleasure for me and I have the best fans and supporters. Thank you.”

Presenting the winners of the five categories, in front of more than 300 distinguished guests, including top sporting legends, equestrian fans, National Federations, FEI partners and stakeholders, these awards celebrate outstanding achievements within the equestrian community, tapping into the sporting excellence and celebrating the champions, the unsung heroes and the incredible individuals and organisations backstage making it all happen.

Groom to four-time Olympian McLain Ward, the USA’s Lee McKeever, took the award for FEI Best Groom. After 30 years working with McLain, he is still as dedicated about his work as when he started, going above and beyond to ensure the best possible care for his horses, and always willing to help others in the sport working tirelessly behind the scenes. McLain and Lee’s shared victories include the recent FEI World Equestrian Games™ Tryon 2018 team gold medal with Clinta, the 2017 Longines FEI Jumping World Cup™ title with HH Azur in Omaha (USA), individual gold medal with Rothchild at the 2015 Pan-American Games in Toronto (CAN), and team gold medals at the Beijing 2008 and Athens 2004 Olympic Games with Sapphire.

French Eventing athlete Victor Levecque was presented with the Longines Rising Star Award by Vice President of Longines and Head of International Marketing, Juan-Carlos Capelli. This award highlights the achievements of athletes between the ages of 14 and 21 who demonstrate outstanding equestrian sporting talent. At the age of 20, Victor is already multiple winner, with 10 European medals, including two gold medals and five French national champion titles to his name.

“For a second consecutive year the online public vote has become very popular and a peer to peer recognition is one of the most powerful,” FEI President Ingmar De Vos said. “The influence of one’s peers and the recognition of talent and hard work is a testament to the strengths and development of the growth of the sport.

“Development, like youth, is key to our future and has been a strong focus throughout 2018 as we can see here tonight in the results of the youth of our sport shining through. With our top partner Longines, and their ever-increasing support, their commitment to these awards and equestrian sport globally, and for the first time to celebrate the Fosun Best Athlete award, we are delighted to be here in Bahrain to reward these fantastic achievements.”

Alex Hua Tian and Philip Wong of China accepted the FEI Solidarity award for the Horsemanship charity programme in China. Ten years ago, Alex won the Rising Star Award and he was here as part of the team working to communicate the core value of “Equestrianism as Horsemanship” to the world’s fastest growing equestrian market.

Leila Malki from Palestine was presented with the Against All Odds award. Her dedication to equestrian sport and her passion have made her a role model for young women in Palestine through her encouragement of girls and women to become involved in equestrian sport in her country.

“As FEI’s Top Partner, Longines is very proud to take part in the 2018 FEI Awards Ceremony in Manama,” Juan-Carlos Capelli, Vice President of Longines and Head of International Marketing, said.

“Our connection with the equestrian world dates back 150 years, and we attach great importance to supporting events that are aligned with our core values of tradition, elegance and performance. We are particularly delighted to present the Longines Rising Star award, acknowledging our commitment in supporting new generations of athletes in each sport that we are involved in.” 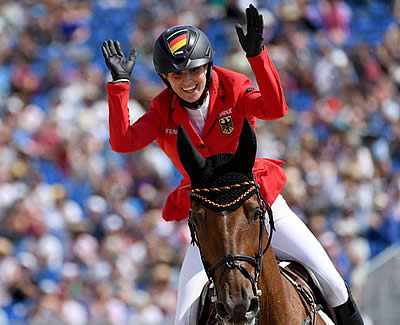