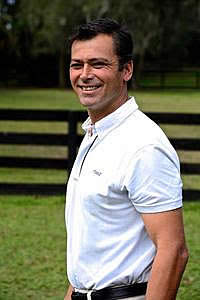 Lexington, KY – The United States Federation’s International Discipline Council has approved the recommendation of Silvio Mazzoni as the Eventing Show Jumping Coach for the Land Rover U.S. Eventing Team. Mazzoni will now begin working to evaluate and improve the show jumping skills of training-listed riders and the Land Rover U.S. Eventing Team. Following the 2014 Rolex Kentucky Three-Day Event presented by Land Rover, Mazzoni, USEF Eventing Team Coach David O’Connor, and the eventing committees will evaluate the progress to ensure it is in line with the goals of the program.

Mazzoni (Reddick, Fla.) has great depth of knowledge in both eventing and jumping having participated in both disciplines as a competitor and trainer. Originally from Argentina, he was a member of the Argentinian eventing team at the 1998 FEI World Equestrian Games in Rome, Italy. Mazzoni also has a wealth of experience in the jumping discipline where he has earned top finishes in multiple Grand Prix competitions as well as operating a successful training and sales business.

Information regarding the Eventing Show Jumping Coach position can be found here: http://usefnetwork.s3.amazonaws.com/pdfs/00/00/00/11/74/usef+eventing+jumping+coach.pdf.

For additional information, please contact Joanie Morris at (859) 225-2052 or by email jmorris@usef.org.

Prior to the start of Sunday’s main event, the Topaz Vaulters, an equine gymnastics spectacle, gave a special performance to kick off an afternoon of show jumping. Course designer Jose “Pepe” Gamarra of Ellenton, Florida made the $40,000 class his debut at HITS Commonwealth Park. His first round saw seven horse-and-rider combinations go clear and then return for the jump-off.

“The course was great,” said Mazzoni, who gained momentum for Sunday’s victory after a fourth-place finish in Friday’s $15,000 Brook Ledge Open Jumper Prix with Remonta Habano. “It was a very technical track, which asked a lot of the right questions.”

First to return in the jump-off was Alexa Lowe of Upperville, Virginia aboard Windsor Farm Sales’ Amicello. The team wasted no time in setting the Great American Time to Beat at 45.306 seconds with a clear effort.

Mazzoni followed and easily took the lead with a blistering time of 39.741 seconds.