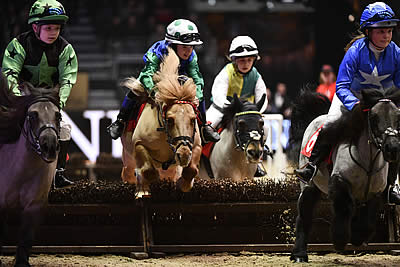 Another sensational Shetland Pony Grand National season will reach its climax at Olympia, The London International Horse Show, which takes place from 16-22 December 2019. A steppingstone for young up-and-coming jockeys, The Saracen Horse Feeds Shetland Pony Grand National will feature daily, showcasing the next generation of jockeys coming through the pony racing ranks.

The Saracen Horse Feeds Shetland Pony Grand National at Olympia is the pinnacle of the season for the runners and riders, following months of competing around the country, with the aim of being selected to compete at the prestigious Show. The 11 jockeys and their ponies have been chosen on merit based on their performances throughout the season, which included appearances at Newmarket’s infamous Rowley Mile Racecourse and Burghley Horse Trials.

There will be several familiar names taking centre stage at Olympia Grand this year, with five children of well-known racing families taking the spotlight from their famous fathers. Nine-year-old Lucas Murphy, son of Grand National-winning jockey Timmy Murphy, made a successful start to his Shetland Pony Grand National career in 2018 culminating in victory at Olympia last year, something he will be seeking to repeat in 2019. Wearing the famous colours worn by his father when winning the Grand National aboard Comply or Die in 2008, Lucas will be one to watch as he takes to the track on Mr D Shepherd’s Cranford Fantastic, the winning combination at the Burghley Horse Trials leg in September.

Another former Grand National winner, Leighton Aspell, who was victorious in the prestigious Aintree race in both 2014 and 2015, will be on the sidelines at Olympia as he makes way for daughters Niamh and Lucy, who will both be making a deserved return to the iconic venue and will be using their experience to navigate the miniature Grand National course to the best of their abilities.

Freddie Keighley, son of National Hunt trainer Martin Keighley, will be making his Olympia debut at this year’s Show. The eight-year-old is in his first year on the Shetland Pony Grand National circuit, which is for children between the ages of eight and 14 years old, who are under five feet tall.

Following his selection, Freddie said: “I can’t believe I’ve managed to be selected for Olympia in my first season on Blackie [Brewards Kerwen]. He’s improved so much and I’m so proud of him. My parents have been taking me and my brother Harry to Olympia specially to watch the Shetland Pony Grand National for years and I am so excited to now be riding in it. It’s a dream come true!”

Lily Phelan will also be representing a renowned National Hunt family as she returns to Olympia, this year with new ride Sedgehill Talisman, who has shown remarkable improvement throughout the season and will be coming to the Show in excellent form.

Bringing further illustrious racing links to Olympia Grand this year will be Zak Kent, who will be wearing the famous blue and white silks of His Highness Sheikh Hamdan Bin Rashid Al Maktoum, colours carried to victory in more than 50 international Group One races including 14 European Classics, the Melbourne Cup, Breeders’ Cup Classic, and the Dubai World Cup. The 12-year-old was involved in one of the highlights of the season, when beating rival Lucas Murphy by a nose-length in a photo finish at Newmarket’s Cambridgeshire Meeting, holding off a late challenge from Murphy at the end of the two-and-a-half-furlong contest.

Show Director, Simon Brooks-Ward, said: “The Saracen Horse Feeds Shetland Pony Grand National is always a crowd pleaser at Olympia and it’s great to be able to provide a platform for the country’s next generation of jockeys to demonstrate their talents on the international stage.”

In addition to the competitive element of The Saracen Horse Feeds Shetland Pony Grand National, the young jockeys will be using the Show to raise funds and awareness for The Bob Champion Cancer Trust. The Trust was set up by Grand National-winning jockey, Bob Champion, who won the race aboard Aldaniti in 1981, having been diagnosed with cancer just two years previously. To date the children involved in the Shetland Pony Grand National 2019 series have raised over £70,000 for the charity and will continue with their fundraising efforts at Olympia. 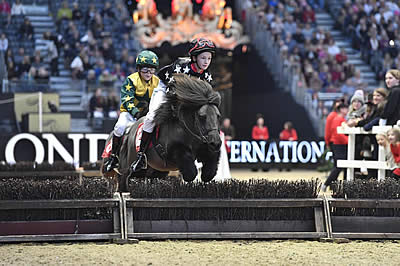 From 17-23 December 2018, Olympia, The London International Horse Show, will welcome the return of the much-loved Osborne Refrigerators Shetland Pony Grand National, a fast and furious race showcasing some of the UK’s young, talented, and up-and-coming jockeys.

This year’s line-up features some of the brightest young names in horse racing, including Olive Nicholls, daughter of 10-time British National Hunt Champion Trainer Paul Nicholls, who no doubt will be giving Olive a tip or two in her preparations for Olympia. Nicholls will compete against Alice Crowley, daughter of 2016 British Flat Racing Champion Jockey, Jim Crowley. The pair has the equestrian genes to contend, but how will they fare in Olympia’s Grand Hall?

Entrants are required to be aged 8-14 and must be under five feet tall. Riders race around a track, jumping obstacles mimicking those at the Aintree Grand National, only in miniature form. The event is the pinnacle of the Shetland Pony Grand National calendar and is set to attract hordes of spectators from the 90,000 attendees, who are due to visit Olympia over its seven days of competition.

Although undoubtedly a fun-filled event, there is also a real spirit of competitiveness among the riders. Many of them are aiming to emulate past competitors, who have graduated from the Shetland Pony Grand National to become professional equestrians, including Sam Twiston-Davies and Tom Garner, who are now established names on the racing circuit.

Following in the footsteps of the Twiston-Davies brothers, Gloucestershire has another Shetland Pony Grand National competitor tipped for the top: nine-year-old Lucas Murphy, whose father, Timmy Murphy, has ridden over 1,000 winners in the professional jump racing world. Joining Murphy and his pony Shelcroft Buttercup will be Lucy Aspell, daughter of back-to-back Grand National winner, Leighton Aspell. Aspell will be returning for her second successive year at Olympia and is likely to pull out all the stops to go the distance.

All proceeds from the Shetland Pony Grand National will go to the nominated charity, The Bob Champion Cancer Trust. Founded in 1983, the charity has raised an incredible £16 million for cancer research and will be the direct beneficiary of the money raised by the young jockeys, who last year managed to raise a terrific £42,500. 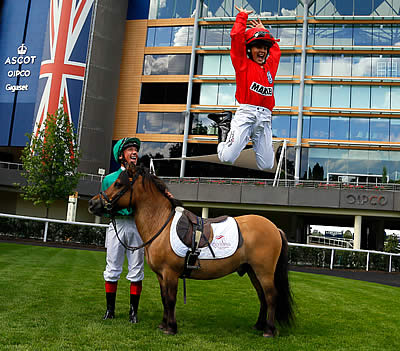 Organisers of Olympia, The London International Horse Show (12-18 December, 2017) are delighted to announce the Osborne Refrigerators Shetland Pony Grand National will be back in action at the iconic venue, with a fierce line-up of young jockeys following the footsteps of their famous parents.

Amongst the starting line-up will be 10-year-old Alice Crowley, daughter of Jim Crowley, the current Champion flat jockey who commenced his racing career in the Shetland Pony Grand National. Crowley will be competing against Rocco Dettori, son of racing legend and three-time Champion jockey, Frankie Dettori. Olympia Horse Show will be a family affair for Rocco, as Frankie Dettori is set to compete in the Markel Champions Challenge in aid of the Injured Jockeys Fund, as part of Friday’s ‘Race Night’ at Olympia.

Frankie Dettori said: ‘Rocco has competed in many Shetland Pony races now; he’s got a taste for winning. This year is going to be really special as I will be there too, competing in the Markel Champions Challenge on the Friday. Hopefully we are both going to win!’

Rocco Dettori said: ‘I just can’t wait to race in front of the crowd. It’s a little bit nerve-wracking, but once the race starts I’ll forget about all that and hopefully I can win.’

Also striving to replicate the success of her father will be Lucy Aspell, daughter of renowned jump jockey Leighton Aspell, winner of two consecutive Aintree Grand Nationals. Aspell will be contending for the win against Zak Kent, who will be joining Crowley to race in the notorious blue and white racing silks of HH Sheikh Hamdan bin Rashid Al Maktoum.

Show Director, Simon Brooks-Ward, said: ‘We are absolutely thrilled to stage the Osborne Refrigerators Shetland Pony Grand National once again. Not only is it entertaining, but it is a chance for young jockeys to compete on the big stage. It’s great for the grassroots of racing; this is where many top jockeys have begun their careers.’

Top national hunt jockeys Sam and Willy Twiston-Davies kick-started their racing careers in the Shetland Pony Grand National, as did Tom Garner, who made the step up to compete in the Grand National for the first-time last year.

The young jockeys and their Shetland Ponies will be put through their paces around a miniature version of the Grand National course. All riders are between the ages of nine to fourteen and less than 5ft tall; however, onlookers are not to be fooled by their size, as Olympia Horse Show is the climax of the Shetland Pony racing calendar, guaranteeing electrifying competition.

Spectators can also expect a week of top international action, including three FEI World Cup™ competitions in Dressage, Show Jumping and Carriage Driving and performances set to captivate, such as the Chilean Huasos, a display reflecting the historical skills of Chilean cowboys, or ‘Huasos’, and cattle horses. The Kennel Club Dog Agility and Christmas Finale, supported by Hilton, London Olympia, will also be adding to the arena action.

More information about Olympia, The London International Horse Show, and how to secure your place at one of the equestrian performances of the year can be found online here. 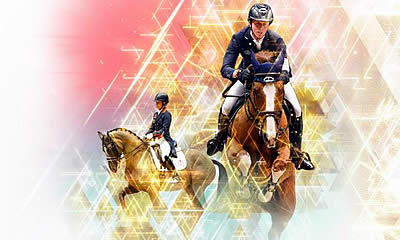 The anticipation for this year’s winter horse show competition and horse racing is tremendous with some of the top riders in Show Jumping and Dressage scheduled to compete this month. December begins with the annual international horse show at Olympia. The Shetland Pony Grand National holds all the excitement of the horse race on a miniature scale! Shetland Ponies and their riders race around the arena at a fast and furious pace – it really is one of the highlights of Olympia. Horse racing and betting enthusiasts can check scheduling and horse racing odds at 888sport Horse racing betting.

The most competitive Show Jumping competition since the Olympics will be taking place in Olympia this week with gold medallists from England, France and Germany competing in what will be one of the most talented and exciting international shows in recent memory. The Frankfort Festhalle will also be taking place this month from December 15-18. Of the top 30 riders, 17 will be competing in Mechelen from December 26-30.