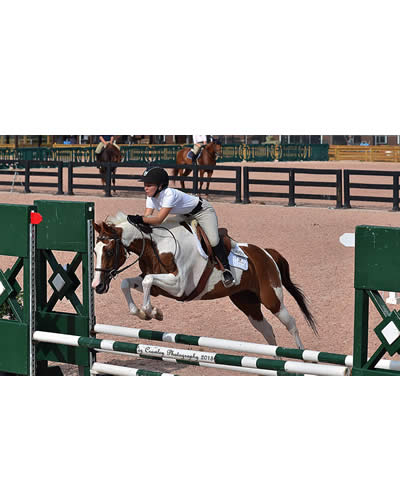 Mihkayla Shetterly and her mount Gypsy Queen made their A rated show debut in the Premier Equestrian 0.80m Low Jumper Division at the Tryon International Equestrian Center this summer in hopes of moving up to the Pony Jumper division in the next year. Gypsy Queen is no newbie to the jumper ring. A proven teacher, she has previously helped guide four different students through the levels in the past ten years.

Shetterly’s trainer Trena Kerr recalled, “Mihkayla’s pony has seen the world and is quite brave; however, on the first day of the show, she was really distracted by nearby construction. Mihkayla felt like she shouldn’t be there, and like she might not be ready to do a big show like this.”

However, with her trainer’s encouragement, Shetterly returned to the jumper ring the next day. “She went right in there and won the Pro 0.80m, and then she won the Non-Pro 0.80m!” Kerr exclaimed. Already planning to return to Tryon for a couple weeks next season, Shetterly and Gypsy Queen’s successes will be a story to follow in the upcoming months.

Shannon O’Hatnick won the Premier Equestrian 0.80m Low Jumper Division on Solar Flare, a twelve-year-old Thoroughbred/Trakehner mare known as Willow. The pair trains with Christen Khym. O’Hatnick beamed with pride for Willow after their victory. “If I had to put it in a few words, I’d say that each second of every ride I am always beyond proud of the heart and effort she always gives me. Winning is just a nice treat for a happy finish,” she stated. “The show was run impeccably and the facility was the nicest I’ve been to yet,” she added about the Tryon International Equestrian Center show grounds.

Under the guidance of his father and trainer Darragh Kerins, Daniel Kerins competed with his 12.2 hand pony, Gentleman Jim. The twelve-year-old Welsh bred pony was imported from England three years ago, and has been with nine-year-old Kerins for the past six months. The young rider has gained some incredible experiences throughout the summer series at Tryon, taking home three first place finishes – including in the Premier Equestrian 0.80m Low Jumper Division – as well as a second and fourth place. “Daniel says Tryon was his favorite horse show in the world,” Kerins’s father commented.

Premier Equestrian was happy to share in the excitement of show ring victories with the 0.80m Low Jumper Division winners. Trainer Trena Kerr said, “When you have been going to Tryon for years, you have family there. I’m super thrilled to have Tryon because most of my clients will probably never get to go to the Winter Equestrian Festival in Florida due to finances and school, so the fact that we have such a fantastic place like Tryon really drives their excitement.”

Premier Equestrian is honored to be part of the “family” at the Tryon International Equestrian Center, and to help horses and riders progress up the levels by sponsoring the show series. Premier Equestrian’s products are popular with riders of all levels, and are used in several of the world’s top competition venues. For more information about Premier Equestrian and the exceptional products the company has to offer, visit www.PremierEquestrian.com or call 1-800-611-6109.