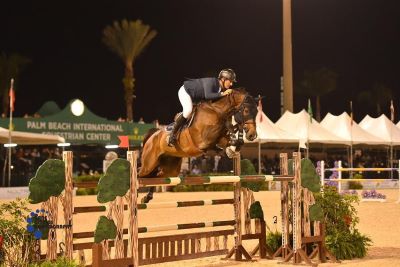 Wellington, FL – Nov. 28, 2021 – The feature event of the 2021 71st Annual SFHJA Charity Horse Show took place under the lights on Saturday evening as 34 talented teams competed for the win in the $50,000 Spy Coast & Sweet Oak Farm Grand Prix at the Palm Beach International Equestrian Center (PBIEC). Course designer Oscar Soberon (USA) created a 16-effort track for the class, which saw seven duos advance to the jump-off. Less than one second separated the top three finishers at the conclusion of the contest, led by Luis Pedro Biraben (ARG) and his own Chacco Bumpy. 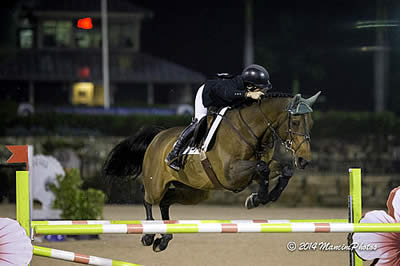 Catsy Cruz of Mexico set the course for 47 entries in round one with five clear rounds to advance to the short course. Margie Engle and Elm Rock LLC’s Bockmanns Lazio were first to jump-off and finished fifth with four faults in 34.61 seconds. Kevin Babington and Mark Q jumped next and had four faults in 34.37 second to finish fourth. Chris Ewanouski and Hampton Farms LLC’s Orbetello jumped the first clear round in 34.01 seconds to finish third. Up next, Campbell and Rocky W set the winning time of 31.57 seconds. Lorcan Gallagher and Spy Coast Farm LLC’s Diktator van de Boslandhoeve were last to go and settled for second with a time of 32.67 seconds.

On a rainy evening under the lights of the International Arena at PBIEC, Campbell trusted in her long partnership and experience with Rocky W to go for the win. She has had the 16-year-old KWPN gelding (Libero H x Corofino) since he was eight and knew that the atmosphere of the arena would play to her favor.

“There were only five clear, so it was difficult enough obviously to get that number,” Campbell remarked on the course. “Going into the jump-off, I figured I was already getting a paycheck and I should just go for it at that point. He has shown in this ring under the lights a lot of times, and it always pumps him up a lot. He knows that it’s jump-off time, and it is perfect for him.”

“He is just really quick across the ground, and he is really quick in the air,” Campbell said of her time. “He doesn’t spend too much time in the air. He knows exactly where his legs are and how to spend the least amount of time over the jumps.”

“We have been showing at indoors the past few months, so it was different going to this big international ring,” she added. “I think his stride definitely opened up, and I was able to leave some strides out.”

Since graduating college in May 2014, Campbell has been working for Marigot Bay Farm, which has locations in Wellington as well as Lexington, KY. She will continue to compete at the 2015 Winter Equestrian Festival, which beings January 7 with 12 weeks of competition at PBIEC.

Competition at the Palm Beach International Equestrian Center continues with Equestrian Sport Productions’ Holiday Horse Show Series beginning on Wednesday. The Holiday Series will host six shows from November 26 through January 4, serving as a precursor to the 2015 Winter Equestrian Festival.