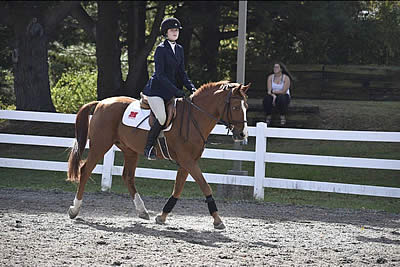 FAIRFIELD, Conn. – June 8, 2020 –The Intercollegiate Horse Shows Association (IHSA) recognizes students through the Intercollegiate Equestrian Foundation (IEF) with scholarships and academic awards. The IHSA Senior Academic Award is granted to seniors who have earned a 3.5 grade-point average or higher. To win the Senior Academic Achievement Essay Award, they must first meet Senior Award requirements. Then, they must submit a 500-word essay about how their IHSA and academic experience have prepared them for a future career. Amy Pitts (New Haven, Vermont), a member of the Marist College team, exceeded the criteria and submitted the winning essay.

“Amy has been an invaluable member of our equestrian team since she joined in 2016,” said Clare Knapp-Englehart, IHSA board member and coach of the Marist College team. “For four years, she has worked tirelessly to serve the team in any capacity possible and was the only candidate we considered for treasurer. Amy is highly intelligent, incredibly disciplined, amazingly organized, and a complete team player.”

Pitts, a double major in applied mathematicians and data science with a minor in computer science, qualified for Regionals in the World Equestrian Center Limit Equitation on the Flat division.

“Our region adjusted the schedule to accommodate Amy so she could rush back to school to present the keynote address for the Honor Society induction that evening,” Knapp-Englehart said. “Sadly, Regionals were canceled due to COVID-19.”

In addition to serving on the Marist College Equestrian Team executive board as treasurer, Pitts was president of both Pi Mu Epsilon (a math honors society) and the Association for Women in Mathematics. She also served as the vice president of Marist Math Club and for two years ran the Marist math lab. Pitts also participated in research with Marist faculty during the academic year and over the summers.

Pitts has accepted a fellowship at Columbia University to study in their Ph.D. biostatistics program.

“Amy has been an unsung hero for a Marist Equestrian Team, and is a great representation of the IHSA,” Knapp-Englehart said. “I cannot think of a more fitting student-athlete for this award.”