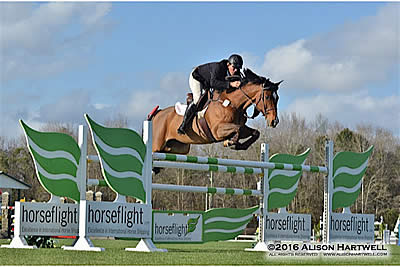 The $10,000 Horseflight Open Welcome Week II of the Gulf Coast Winter Classic saw twenty-six horse and rider teams compete over a course designed by Olympic Medalist and Pan American Course Designer Michel Vaillancort of Tryon, North Carolina. The course was set on the world class grass grand prix field at the Harrison County Fairgrounds which is considered to be the one of the best in North America.

While a majority of the class went clean in their first rounds, the real challenge came with the abbreviated second round when only five of the twenty six would finish double clean.

The first round time allowed was set at 82 seconds. The first to go and the first to post a double clean effort was Francois LaMontagne of Saint Eustache, Quebec, Canada in the irons of his own Dalton. The pair finished a fault-free first round in a time of 81.376 seconds and finished their second round effort in a time of 40.956 seconds, well within the 47 seconds time allowed and set the new time to beat.

Holly Shepherd of Grand Bay, Alabama, who earlier in the day took the top three placings in the $10,000 USHJA International Hunter Derby, transitioned into the jumper arena in the irons of Loretta Patterson’s Skymiles. The pair posted double clean rounds in times of 79.666 and 40.096 seconds, respectively, which would take the lead from Dalton and LaMontagne and set the new time to beat.

Specialized, owned by Missy Nolan and ridden by Tim Maddrix of Birmingham, Alabama, also posted double clean rounds in times of 78.029 and 38.751 seconds and took the lead from Skymiles and Shepherd.

Penny Brennan of Buhl, Alabama and Meco Equestrian, LLC’s Cord II followed Maddrix with double clear rounds in times of 76.322 and 38.162 seconds and set the new time to beat.

Helen Gilbert’s Emir D, ridden by Shannon Hicks of Lake St. Louis, Missouri, posted double clean rounds and looked to challenge Brennan and Cord II’s time, but the pair finished their second round in a time of 43.174 seconds which would see them finish in sixth place overall.

Matt Cyphert of Northlake, Texas and his own Lochinvar followed with the next double clean round in times of 76.139 and 36.999 seconds which would take the lead and set the new time to beat. But Tim Maddrix had yet to go so the win was not one for the books quite yet.

Maddrix returned in the enviable last to go position in the irons of Baily Martin’s Contador De Bornival Z, but eight jump faults and one time fault would keep the pair out of the ribbons and secure the win for Cyphert and Lochinvar.

Brennan and Cord II took second place, Maddrix and Specialized were awarded third, Skymiles and Shepherd received fourth, LaMontagne and Dalton were fifth, and sixth place went to Emir D and Hicks. Chanel du Calvaire and LaMontagne finished in seventh place as the fastest of the four-faulters in a time of 38.947 seconds, while eighth place was awarded to Bull Run’s T-Mac, owned and ridden by Konstanze Wachholtz, who posted a four fault second round in a time of 41.627 seconds. Ninth place went to Hester and Lorstakov; tenth was awarded to Hannah Donald of Highland Village, Texas and her own Commissario 6. Wender and Hester took eleventh place, while Hicks wrapped it up with twelfth place in the irons of Helen Gilbert’s Caritz Donz.

The $7,770 Hester Equestrian Jumper Classic was held Saturday and welcomed twenty-one horse and rider teams to a course designed by Michel Vaillancort. The class is geared toward horses not competing in the grand prix.

One third of the class had the opportunity to advance to the second round, but only two went double clean. Lauren Hester and Hester Equestrian’s Daister L posted double clear round in times of 77.941 and 40.128 seconds, respectively. The pair looked to win the Jumper Classic until last to go Scott Lenkart of Argyle, Texas and La Primera Hacienda’s Emilios posted double clear rounds in times of 73.844 and 38.209 seconds, respectively, taking the lead and putting Hester and Daister L in second place overall. 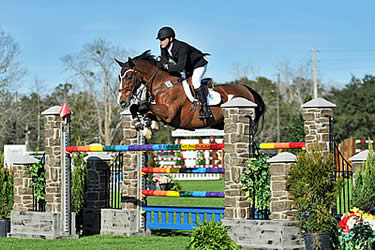 Scott Lenkart and Impulsive fly over an oxer on their way to the winner’s circle. Flashpoint Photography.

Scott Lenkart of Lantana, Texas and his own Impulsive bested a field of 22 horse and rider teams to win the $25,000 Open Welcome Grand Prix at the Harrison County Fairgrounds at the Mississippi Gulf Coast Winter Classic yesterday.

Only four of the twenty-two moved on to the jump-off phase of the class. But Lenkart’s time of 38.215 seconds was untouchable.  Paradox, owned by Thomas Bruinsma and ridden by Theo Genn of Lebanon, Ohio, almost caught the winner, but their time of 40.145 seconds landed them in second place.  Third place was Genn’s brother Ryan, also of Lebanon, Ohio, in the irons of his father’s [Wilhelm Genn] horse Cookie Monster.  The Genn patriarch, Wilhelm, also of Lebanon, Ohio, secured a second round time of 40.801 seconds riding his own Happy Z, but with four jump faults, would finish in the fourth place position.

The complete schedule for free, live, web casting is as follows:

There is no better place to watch the action than the VIP tent.  Tables are only $325 a week and include complimentary wine, beer and hors d’oeuvres during the Welcome classes and Sunday’s luncheon catered by the Official Restaurant Partners of the Gulf Coast Winter Classic along with a complimentary bottle of champagne. Make sure to see Jonathan in the show office to secure your table today!