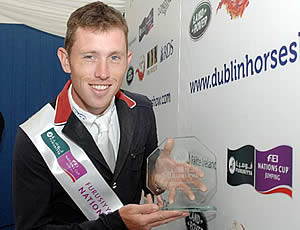 9 August 2013, Ireland – Scott Brash (GBR) has been judged as the winner of the Furusiyya Rider of the Day award at The Dublin Horse Show.

Brash, riding Hello Sanctos, was last to go for Great Britain, but held his nerve under huge pressure and rode two brilliant clear rounds, helping Great Britain win the Furusiyya FEI Nations Cup Jumping in Dublin and also qualify for the Finals in Barcelona in September.

The Furusiyya Rider of the Day award is presented to the horse & rider combination that is judged to have best displayed qualities such as harmony, partnership, balance and skill throughout their two rounds; values represented and embodied by Furusiyya. The award was judged by Lt. Col. Gerry Mullins from The Dublin Horse Show.

– At the 2012 FEI General Assembly in Istanbul, it was announced that Furusiyya would become sponsor of the FEI Nations Cup until 2016.

– “Furusiyya” is a single Arabic word and conveys so much, embracing the idea of horsemanship, chivalry, and equestrian knowledge in general. The term is a derivation of faris, or horseman and faras, a horse.

– The new structure of the Furusiyya FEI Nations Cup Jumping has come about through intense consultation between the Saudi Equestrian Fund and the FEI with the sport’s stakeholders around the world.

– 39 countries have signed up to take part in the 2013 Furusiyya FEI Nations Cup Jumping and 21 Nations will host qualifiers.

– The Saudi Equestrian Fund was created by HM King Abdullah bin Abdulaziz by Royal Decree in November 2009 to give the Kingdom of Saudi Arabia a lasting legacy in equestrianism through sport and cultural events.

– The Furusiyya FEI Nations Cup Jumping is now a genuinely international competition which gives all nations – whether from developed or developing countries – the opportunity to compete on a level playing field and qualify for a highly prestigious Final.

– The Final of the Furusiyya FEI Nations Cup Jumping will be staged at the Real Club de Polo in Barcelona, Spain from 26-29 September 2013.

Today’s course in the International Arena was set by Richard Jeffery of Bournemouth, England. The 1.50m class brought 40 entries to the ring in the first round, but none were able to clear the course without fault. Thirteen entries finished the round with four fault scores, and a jump-off was held to break the tie.

In the 13-horse jump-off, only four jumped clear, and their times were the deciding factor. Ben Maher and Mrs. Phillips’ Quiet Easy 4 were the first to clear the course and stopped the clock in 40.854 seconds, which finished second.

END_OF_DOCUMENT_TOKEN_TO_BE_REPLACED

Forty-five entries showed in tonight’s World Cup qualifier, jumping a course set by Leopoldo Palacios of Venezuela. Eleven cleared the first round course without fault and returned for an exciting jump-off. The nations of France, Ireland, Great Britain, Russia, Canada and the United States were all represented. Nine entries cleared the jump-off course.

END_OF_DOCUMENT_TOKEN_TO_BE_REPLACED

Wellington, FL – March 8, 2012 – Top British riders David McPherson and Scott Brash each took home their winner’s share on Thursday in a split class for round nine of the $32,000 WEF Challenge Cup Series at the FTI Consulting Winter Equestrian Festival (WEF). Held in a ‘California Split’ due to the large number of entries, the class awarded two sets of placings, each with $32,000 distributed. McPherson and his own Silver Spring and Brash and Lady Harris and Lady Kirkham’s Sanctos Van Het Gravenhof were both awarded top honors. The team of Lillie Keenan, Lydia Ulrich, Charlotte Jacobs, and Gabrielle Bausano won the $20,000 Artisan Farms Young Riders Grand Prix Series Team Event presented by Dutta Corporation in association with Guido Klatte. Scott Stewart and Tristan were champions in the Sanctuary Green Conformation Hunters.

END_OF_DOCUMENT_TOKEN_TO_BE_REPLACED

Kathryn Haefner and Columbus Find Victory in the Hunter Ring

Week four of the FTI WEF was sponsored by Adequan. Week five, sponsored by Spy Coast Farm, will run February 8-12. The 2012 FTI Consulting Winter Equestrian Festival has 12 weeks of competition that conclude on April 1, 2012, and they will be awarding more than $6 million in prize money through the circuit.

END_OF_DOCUMENT_TOKEN_TO_BE_REPLACED

The second week of the FTI WEF runs through Sunday, January 22, and is sponsored by Wellington Equestrian Realty. The 2012 FTI Winter Equestrian Festival has 12 weeks of competition that conclude on April 1, 2012, and they will be awarding more than $6 million in prize money through the circuit.