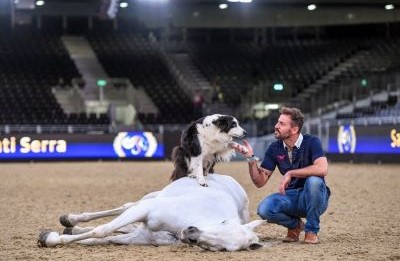 The London International Horse Show, taking place from 16-20 December 2021 at ExCeL London, will welcome hundreds of horses for elite competitions, equestrian displays, and performances. As the only UK Show to host all three FEI World Cup Qualifiers in Dressage, Show Jumping, and Driving, the much-anticipated 2021 edition is set to provide a stellar five days of action.

Onsite rehearsals are already underway for the display acts, which will include a spectacular new routine from Spanish performer Santi Serra, alongside his dog and team of Arabian horses. His natural affinity to the animals, as he communicates with them through mind and body is evident throughout. 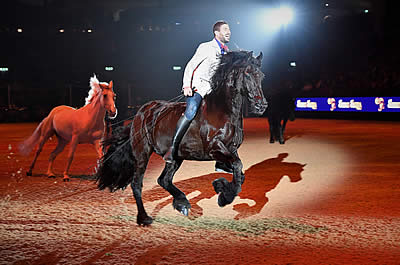 Organisers of The Edwardian Pageant, held in the private grounds of Windsor Castle on the evenings of 14, 15, and 16 May, have announced the participation of world-famous horse whisperer Santi Serra. The Spanish performer is a renowned equestrian artist, known for his mesmerising displays with his team of liberty horses.

Santi Serra’s rare equestrian artistry tells a story through his four Arabian horses and two hawks. The display, known as Sercam Shows, is a performance of ‘natural dressage’ and demonstrates the beauty of horses’ movements, celebrating the harmonious balance between horse and human.

Santi Serra’s inclusion in The Pageant highlights the relationship between England and Spain during the Edwardian Era. Related to nearly every other European monarch, King Edward is immortalised in history as the ‘Uncle of Europe.’ He had a close relationship with Spain, which was cemented by a state visit from King Alfonso XIII in late 1905 leading to his marriage to Edward VII’s niece, Victoria Eugenie in 1906. This was followed in 1907 by a visit to Spain by Edward VII, accompanied by Queen Alexandra, in the Royal Yacht as a part of a formal visit by the British navy fleet to the Port of Cadiz.

King Edward VII’s diplomatic achievements are celebrated in The Edwardian Pageant which showcases equestrian, musical, military, and motoring acts from both the UK and overseas.

Santi Serra describes his performance, saying: “Sercam Shows is all about natural dressage. It is about the movements of horses in the wild, the respect for those who take care of them, the obedience without using force, and about the friendship between myself and them.

“I act as leader of the herd and when they’re with me they feel they can be happy, be playful, and feel confident. The trick is to work as their leader and to study the horses when they are acting naturally. I really hope my performance will be an unforgettable experience for the entire audience.”

Show Director, Simon Brooks-Ward, said: “Following the success of The Victorian Pageant held in 2019, we are very excited to bring spectators on a journey through the Edwardian Era. King Edward’s relationship with Spain was a significant part of his reign and we hope Santi Serra’s presence will bring this aspect to life.

“Santi Serra is one of the most sought-after equestrian artists in the world and we feel very lucky to be hosting him and his horses at Windsor. Demonstrating his intuitive understanding of animals, Santi Serra’s performance will have the crowd captivated and we very much look forward to experiencing his unique relationship with his horses firsthand.”

Narrated by Alan Titchmarsh MBE, the 90-minute Edwardian Pageant will see equestrian displays from all around the world including La Garde Républicaine, The Musical Drive of the King’s Troop Royal Horse Artillery, and The Musical Ride of The Household Cavalry Mounted Regiment, alongside military displays, dancers, and actors. The show, celebrating the achievements and landmarks of the era, is set to music played by the 43-strong National Symphony Orchestra, which will accompany each performance throughout the night.

Tickets for The Edwardian Pageant are now available online at www.windsorpageant.co.uk or via the box office on 0844 581 0755. Local Windsor residents may purchase their tickets at Windsor Information Centre located in Windsor Royal Shopping or by telephone on 01753 743 589.