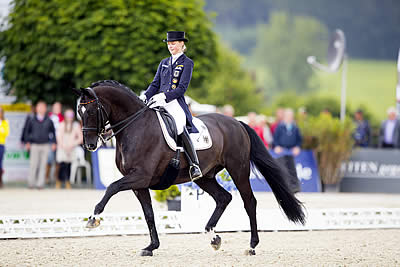 Hagen (GER), 19 June 2016 – Germany’s Sanneke Rothenberger stole the show with a hat-trick of gold medals at the inaugural FEI U25 Dressage Championships which drew to a close in Hagen (GER). The 23-year-old rider led her country to victory in Friday’s Team competition and then returned to top both Saturday’s Grand Prix and Sunday’s Freestyle classes with her 15-year-old Oldenburger, Deveraux.

However, the real winner of the weekend was the sport itself, as rising stars from 14 nations demonstrated their formidable talent and enormous promise. These Championships are designed as a stepping-stone on the steep climb to the elite level of the sport, and the future is looking very bright indeed, with great expectations that many of those who excelled over the last few days may already be on the road to the 2020 Olympic Games in Tokyo.

There was an early indication of the quality of the competition when the German team drop score on Friday was the 72.526 posted by Nadine Husenbeth and Florida. Florine Kienbaum and Doktor Schiwago (72.632) and Juliette Piotrowski and Sir Diamond (72.658) were marginally better, but Rothenberger’s massive leading score of 76.737 percent left the result beyond doubt.

Winning Chef d’Equipe, Germany’s Monica Theodorescu, was delighted, not only with the team result but with each of her riders’ individual performances. “All dreams have come true!” she said after they stood on the top step of the podium. And German team trainer, Jurgen Koschel, was thrilled with Rothenberger’s performance while also complimenting Piotrowski, Kienbaum and Husenbeth on rising to the challenge. “All three presented their best performances ever – this is extraordinarily good for a championship!” he said. Rothenberger said that she knew she could rely on Devereaux – “He was in top form and was really fighting with me here in Hagen today.”

Netherlands’ Chef d’Equipe, Johan Rocka, said he was “incredibly happy” with his team’s silver medal spot. “Unfortunately one of the girls made a mistake in the pirouette. The performances today are a good basis for the individual medals tomorrow, and we want to launch a real attack!” he added.

However, Kooyman’s fifth place finish would be as good as it would get for the Dutch in Saturday’s Grand Prix in which Diana Porsche began to shine. Riding Di Sandro, the 20-year-old Austrian earned a mark of 72.535 from Ground Jury members Janet Lee Foy, Ghislain Fouarge, Irina Maknami, Magnus Ringmark and Dr. Evi Eidenhardt to finish close behind bronze medallist Juan Matute Guimon from Spain.

Germany ruled the roost once again, with Florine Kienbaum filling silver medal spot behind Rothenberger wearing her second gold medal of the tournament.

There was no doubt in the minds of the Ground Jury about their winner here, all five putting Rothenburger in pole position on a mark of 75.977 percent. “I think I’ve won more than 17 titles, but I will have to check that again,” said the newly-crowned Grand Prix champion afterwards. In fact she already had 16 Championship medals in her trophy cabinet before adding three more, her haul of loot including seven team and six individual golds accumulated over the 12 Championships in which she has competed since 2006.

“My feelings today are impossible to describe – I already won individual and team gold in the Junior and Young Rider division with ‘Devil’ (Deveraux) and now also in the Under 25 which definitively confirms the quality of this fantastic horse!” Rothenberger said. Despite her success, she admitted things hadn’t quite gone to plan in the Grand Prix, however. “I was a bit annoyed with myself; the mistake in the one-tempi changes was my fault” she insisted.

Silver medallist Kienbaum said “the whole competition was so exciting – I am incredibly proud!” Her 12-year-old Hannoverian, Doktor Schwiago, whose nickname is “Mini”, is an enormous black horse who, despite his size, knows exactly how to present a picture of harmony with his rider in the arena. “There was a lot of tension during the team competition yesterday and I chose the safe option,” Kienbaum explained, “so today I wanted to improve our performance.”

At just 18 years of age, Spain’s Juan Matute Guimon was one of the youngest riders in the Championships, but with four European Junior Championships under his belt and individual gold at last year’s Junior Championships in Vidauban (FRA) already to his credit he’s not short on experience. After posting 72.558 with Don Diego Ymas for bronze medal position, he said, “I am very proud and very grateful. I fully enjoyed the fantastic feeling and atmosphere here in the stadium. Tomorrow I will present my Freestyle to the music of Michael Jackson – you can count on me,” he added.

Rothenberger, however, had already thrown down her marker after her Grand Prix victory when mentioning that “last year I scored a little more than 79 percent” in the Freestyle at CDIO Hagen, so her opponents were well-prepared. And when she posted 80.450 with another fabulous Freestyle performance from Deveraux, then Kienbaum would take another silver with her mark of 77.175.

Matute Guimon had to settle for ninth place as the Germans took a firm hold at the top of the leaderboard, team gold medallist Nadina Husenbeth and Florida slotting into fourth for the host nation behind Austria’s Diana Porsche whose 76.000 earned the bronze. Porsche and Di Sandro made a big impression with a double of U25 class wins during the Reem Acra FEI World Cup™ Dressage 2015/2016 fixture in Salzburg (AUT) last December and enjoyed further success at the Winter Equestrian Festival in Florida (USA) earlier this year on the road to Hagen.

But it is Germany’s Rothenberger who will go into the history books after grabbing a great deal of the glory and shining a bright light into the future at the first ever FEI European U25 Dressage Championships.

Lausanne (SUI), 24 JULY 2011 – German riders had it almost all their own way when claiming both the Young Rider and Junior team titles as well as three of the individual gold medals on offer at the FEI European Dressage Championships for Young Riders and Juniors 2011 at Broholm Castle in Denmark this weekend.  But the host nation did themselves proud when finishing a close second in both team events and then coming out on top in today’s Junior Freestyle Championship won by Nanna Skodborg Merrald and Millibar.

For Germany’s Sanneke Rothenberger these championships have been a particular triumph, as the 18 year old daughter of Olympians Sven and Gonnelien Rothenberger continues an ever-upward trajectory in her already impressive career.  She won team gold as a Pony rider, and in 2007 made history in the German Youth Riders Championship when clinching silver in both the Pony and Junior divisions.  She won team and individual gold at the FEI European Junior Championships in 2009 and last year claimed team gold and individual silver at Young Rider level.  This weekend, with her 10 year old Oldenburg gelding Deveraux which she has been competing for the last four years, she stepped up her game even further when taking Young Rider Team, Individual and Freestyle gold, firmly placing herself at the forefront of her sport and displaying an awesome talent in the making.

HRH Princess Benedikte of Denmark, the dedicated and active patroness of the Danish Equestrian Federation, attended the event and today the FEI President, HRH Princess Haya, was also at Broholm Castle to present the medals to the winning riders. It has been a testing few days in every respect, as the weather did all it could to disrupt this year’s fixture with pouring rain and high winds creating a less-than-perfect competition environment.  But the next generation of top-class dressage competitors rode through it with determination and emerged triumphant in the end.