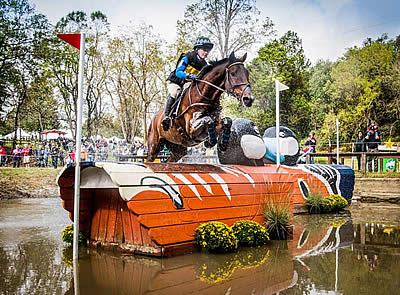 “It’s a really big honor to be chosen for the [Amanda Pirie Warrington Grant] because I know that a lot of other great riders before me have received it,” said Keefe. “It definitely feels good to have the support of the USET Foundation and other people behind the grant who believe in me.”

The Amanda Pirie Warrington Grant is awarded through the USET Foundation Amanda Pirie Warrington Fund. Keefe, this year’s winner, has demonstrated her talent at many of the nation’s top CCI1* and CCI2* events. At just 18 years old and a freshman at the University of Kentucky, Keefe has piloted her top mount, Flintstar, to a number of impressive finishes, including winning the Virginia Horse Trials CCI1* in 2017 and finishing 11th overall at their first CCI2* at Fair Hill International in 2018.

Keefe credits much of her success to her veteran partner Flintstar, who she acquired in 2016. The 2000 Thoroughbred gelding was previously ridden by New Zealand’s Jonelle Price up through the 4* level and even contributed towards New Zealand’s team bronze medal at the 2012 Olympic Games in London.

In July 2018, the pair competed for the first time on the Area II CICOY2* squad at the Adequan®/FEI North American Youth Championships (NAYC), which took place in Kalispell, Montana, in conjunction with The Event at Rebecca Farm, where they won team gold and placed fourth individually.

Most recently, Keefe was selected to the Emerging Athlete Eventing 25 program by the US Equestrian (USEF) Eventing Sport Committee in December 2018. The program will host its winter training session with USEF eventing emerging athlete coach Leslie Law in Ocala, Florida from Jan. 14-17.

The Amanda Pirie Warrington Fund was established by Pirie’s family in her memory with the purpose of helping to provide financial assistance to an eventing rider who has been identified as an athlete with great talent and ability to represent the United States in the future.

As the recipient of the grant, Keefe, who trains with her mom, Rumsey, and Sharon White of Last Frontier Eventing, will receive up to $5,000 to help offset expenses associated with her training over the next year.

“The grant will help me a lot with our winter training in Ocala,” said Keefe. “Since [Flintstar] is getting older, I would like to get some Advanced Level experience out of him this year. He has been such a good teacher so far for me. A big thanks again to the people behind the grant for all of their support!”

Thanks to the Amanda Pirie Warrington Grant, Keefe can focus on continuing her training and preparing for competitions as she aims towards one day representing the United States on the international stage.