IF ANIMALS COULD TALK … “As the Wild Goose Flies” … Ron Hevener

It was business as usual … Political strategists were advising British Petroleum on how to save face … Republicans were debating the merits of tea … the stock exchange was crashing on Wednesday and rallying by Friday, the same as always, and nobody could decide which movies were worth watching any more.

On TV, America was dancing with the stars, England was judging everybody’s talent and immigration was the subject du jour of national debate as flocks of wild birds and hordes of colorful butterflies flew as they had always flown – free and beautiful on magnetic paths only they could sense, pulling them towards a destiny only they could imagine.

Nobody bothered asking the birds what they thought of migration. What could common birds and butterflies know about pulling up their roots and starting a life all over again some place else? They didn’t have jobs, houses, cars and passports. Butterflies were made for catching in jars, pinning under glass in scientific biology collections and wreaking their revenge by splattering themselves on windshields at high speeds. Birds? Birds were just feather-brains ….

“Did you see that!” a magnificent gander piloting the flock shouted to his followers as they flew into the night. 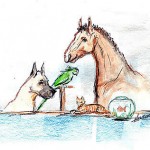 Winter’s aching fingers pinched my ears as I hurried to the barn. My toes, cozy and padded by woolen socks in a new pair of work boots, bent with each chunk of frozen mud beneath them and sent fluffy, mindless snow bouncing away on my path. A shepherd amid his flock of sheep, or a farmer in a cloud of white chickens, might have centered himself in such a universe. I was on my way to the horses that had become the center of my life.

Over the years, I had studied our purpose in the big picture. I had studied yoga and philosophy and had enjoyed the teachings of many interesting thinkers. I had traveled with them on their lecture circuits and to their book signings. I had been a guest in their homes, at their hotels and at their universities. Authors of books such as “Cosmic Consciousness”, “As a Man Thinketh” and “The Magic of Believing” became personal acquaintances or intellectual friends living through their works in my private library. Walter Russell, HH Swami Rama, Col. Arthur Burkes, and the like, were writers and observers of thought whom I was lucky enough to know and ask almost anything I could imagine. Thinking back, I usually wanted to know where I belonged in the grand scheme of things – and what meaningful purpose I was living for. I stopped asking those questions as time went by and life took its course. Read more> http://www.horsesinthesouth.com/article/article_detail.aspx?id=9935