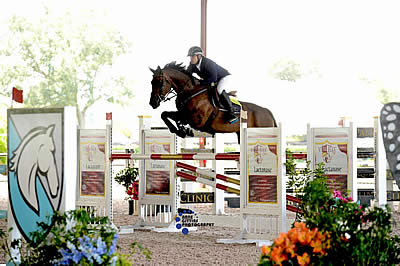 Wellington, FL – October 1, 2019 – This past weekend marked the end of the ESP Summer Series and another big win for Roberto Daza of Royal Palm Beach, FL at the ESP Rita & Irish Memorial competition. Daza rode Fernanda Dib Gabriel’s Sissi Dior to victory in Sunday’s $10,000 Lactanase 1.35m Open Stake, after completing the jump-off in just 38.9 seconds. Carlo Graziani of Loxahatchee, FL took home second place after his performance aboard his entry Erato M, crossing through the timers in 42.885 seconds and with one fault added to the score. Completing the jump-off with a faster time of 38.093 seconds but with four faults total was Samuel Parot of Wellington, FL riding Parot Horses LLC’s I & H Boogy Woogy to win the third-place ribbon.

Both the fourth and fifth place positions were captured by Diego Perez Bilbao of Wellington, FL. Perez Bilbao piloted Zera 23, owned by Victoria Vargas D’Agostino, through the jump-off in 40.116 seconds and with eight faults to secure fourth place, while his own Helios finished round one in 86.678 seconds and with two faults to take home the pink ribbon. Hector Loyola was the course designer once again for Sunday’s feature class which saw a total of 19 horse-and-rider pairs contest the 1.35m track. 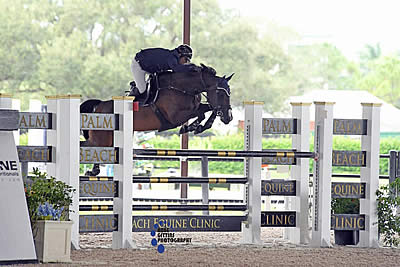 Wellington, FL – September 24, 2019 – The ESP Florida State Fall competition concluded this Sunday with the $10,000 Lactanase 1.35m Open Stake at Equestrian Village. Roberto Daza of Royal Palm Beach, FL rode Brownie and Cream to the top of the leaderboard in this Sunday’s feature class, after crossing through the jump-off timers in 44.599 seconds with eight total faults. Pablo Barrios of Wellington, FL and his mount, Elana 22 followed close behind with eight faults and a 46.079-second jump-off to claim second place. Rounding out the top three with 51.831 seconds on the clock and eight faults was Alejandro Karolyo of Wellington, FL aboard Monica Carrera’s Bobbi Ciulino.

Hector Loyola designed the track, building a solid course for the large turnout of 25 competitors to contest. While only the top three champions completed the first round with zero faults, Samuel Parot also had some luck with the course. The Wellington, FL local was awarded both second place aboard his entry, Buga Z, after their 76.186-second, four-fault round, and third place with his Bahira S upon completion of the course in 77.207 seconds and with four faults.