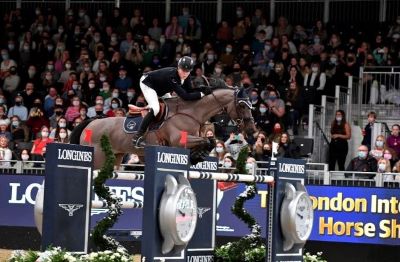 It was an action-packed final day of The London International Horse Show. The prestigious London Grand Prix provided a fitting conclusion to the five-day event, with Harry Charles taking the spoils. His victory sealed his status as the Leading Rider of the Show. The world’s best riders were also in action in The Mistletoe Speed Stakes, which was won by Edouard Schmitz.

The BSPS Ridden Mountain & Moorland Championship sponsored by LeMieux was won by Welsh Section C, Lynuck the Showman, ridden by Rebecca Penny and owned and bred by Lynn Scott. It was a well-deserved victory for one of the most consistent combinations on the circuit, who have been in the top 10 at the London International Horse Show for the past four years.

HARRY CHARLES DOES THE DOUBLE

The London Grand Prix provided a spectacular finale to the 2021 Show. A challenging course designed by Guillherme Jorge left no room for error, demanding precision and power to achieve the all-important clear round required to progress to the jump-off.

Nine combinations made it through to contest the second round against the clock. In-form Harry Charles made a very good start aboard the 15-year-old Borsato to put the pressure on, with a clear in the time of 33.53, going one step closer to emulating his father’s 1993 victory in this class. France’s Edward Levy followed and put in a valiant effort, although not quite matching Charles’ pace.

FEI Jumping World Cup runner-up Harrie Smolders was the next to jump a clear, although again not able to match the level set by Charles. Even Olympic champion Ben Maher had to settle for second place, despite pulling out all the stops in a round which will have had Charles worried. In victory, Charles becomes the first rider to do the London leg of the FEI Jumping World Cup and the London Grand Prix double since Robert Smith in 2005.

An elated Charles said: “Weekends don’t get better than this. I’ll probably never have another weekend like it in my life! Thank you everyone for putting on such an amazing show; it’s my first time here and I can’t wait to come back. To be honest, I didn’t think I’d done enough. The guys behind me are all so quick. I just did all could and I’m absolutely ecstatic.”

Charles went on to praise the jubilant home supporters: “The crowd make this show what it is, so I would like to thank everyone for supporting all of us this week.”

The Voltaire Design Under 25 Championship featured the top 10 riders from the morning’s qualifier, which was won by defending champion, Jodie Hall McAteer, riding Mademoiselle A.

The first of five to go through to the second round was Robert Murphy, carrying four faults from the first round; however, with only two first round clears, all was still to play for. Murphy put in a solid performance to stay on four faults, posting a time to beat of 28.74 seconds, good enough for eventual third. Joe Stockdale produced the first double clear to move into pole position, but with a relatively conservative time, the door was left open to Hall McAteer as the final rider to go. With a gallop down to the last, Hall McAteer made up time on her rival to take her second win of the day and reclaim the title she also won at the 2019 Show.

The 21-year-old said: “I’ve been very fortunate to have had the year I’ve had; I’ve got an amazing team of horses and people around me so it’s really special to come here and end the year in this way. There’s nothing better than coming here with the amazing crowd and atmosphere; this is what we work every day for, so I’m very happy to be here and in this position.”

The GS Equestrian Pony Club Mini-Major, a pairs relay whereby the world’s best international Show Jumpers team up with young Pony Club riders, had the crowd on the edge of their seats. The format saw the international riders jump an untimed first phase before handing over to their junior counterparts for a second section against the clock.

First to go, France’s Daniel Delsart, paired with Martha Cussins, set a good standard, jumping double clear with a second phase time of 22.33 seconds. Laura Renwick, a previous winner of this class, this year paired with Cliodhna McEvoy, completed her role successfully, jumping clear in the first phase. McEvoy took over the baton, setting off like a rocket and making impossibly tight turns to make up almost two seconds and set a new target of 20.58 seconds.

Cate Kerr, from the Newmarket and Thurlow Pony Club, already a winner at The London International Horse Show this week, was paired with William Funnell, as the last to go, but despite a great round by both partners, Kerr’s time of 22.40 seconds was only good enough for third place.

After the class, Renwick said: I was gob smacked with their performance. I did my round, which was very pressurized as I couldn’t have a pole down, and obviously I didn’t want to let Cliodhna down. Then I stopped and did a nice circle before she started, and then when she started, I think my jaw dropped; it was incredible. The atmosphere, the angles, the speed, the accuracy – I was really surprised and impressed.”

The Mistletoe Speed Stakes was an adrenaline-filled test of speed, with three seconds added for every fence knocked down. Renwick was looking to make it a double for the afternoon and came out first to go meaning business; however, a fence down added three seconds to her otherwise fast round to put her out of contention.

Shane Breen put in a brilliant performance to set the early pace aboard Cuick Star Kervec and he held the lead for the majority of the class. With just four to go, home favourite John Whitaker – in his 49th year competing at The London International Horse Show – showed why he was still at the top of the sport, with a majestic performance aboard Green Grass, the horse he rode to victory earlier in the week, to take over at the top of the leaderboard much to the crowd’s delight. However, it was Switzerland’s Edouard Schmitz, as the penultimate rider to go riding Balenciana K, who clinched the victory from Whitaker, who at the age of 66 is 44 years Schmitz’s senior.

“I have really enjoyed the Show,” said Schmitz, “especially now having a result like this. The crowd has been amazing, the classes have been super; it’s been top sport; you can only be happy. I saw John’s round and I thought it would be very hard to beat, but I think I was very fast from fence two to three and my horse in generally a bit faster than John’s; however, I do feel a bit guilty about beating him in London!”