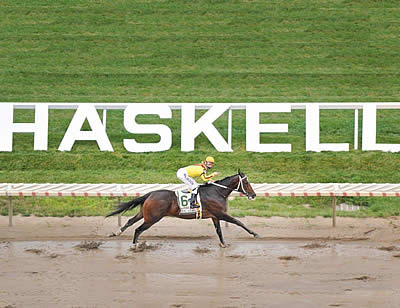 Lexington, Ky – July 12, 2019 – The Grayson-Jockey Club Research Foundation in collaboration with Stonestreet Farms, a global breeding and racing operation, celebrates the 10-year anniversary of Rachel Alexandra’s 3-year-old campaign, during which she went undefeated in eight starts and earned Eclipse Awards for Three-Year-Old Filly and Horse of the Year. With this momentous occasion fans will have the opportunity to participate in the Stonestreet Giving Challenge through an online auction that concludes on July 21st at 10pm. The auction includes a signed Robert Clark print of Rachel Alexandra, a Rachel Alexandra halter, goggles signed by Hall of Fame jockey Calvin Borel, Rachel Alexandra’s regular rider, and many other racing memorabilia items. Donations can also be made in honor of Rachel Alexandra through the Grayson tribute program. More information about the charity auction and tribute program can be found here.

Grayson-Jockey Club Research Foundation is traditionally the nation’s leading source of private funding for equine medical research that benefits all breeds of horses. Since 1983, the foundation has provided more than $27.5 million to fund 366 projects at 44 universities in North America and overseas. Additional information about the foundation is available at grayson-jockeyclub.org.

Rachel Alexandra, the filly who shocked the racing world in 2009 by winning the Preakness and defeating the colts and male horses in two other G1 races en route to an 8-0 campaign and a Horse of the Year title, has retired, majority owner Jess Jackson announced today.

“As you know, despite top training and a patient campaign, Rachel Alexandra did not return to her 2009 form.  I believe it’s time to retire our Champion and reward her with a less stressful life.  We are delighted that she will retire healthy and happy to our beautiful farm in Kentucky.

Rachel Alexandra owes us nothing.  As a 3-year-old, she set standards and records that no filly before her ever achieved.  And I suspect it will be quite a while before a three year old filly ever equals or surpasses her achievements.  Although her fans were thrilled by a series of spectacular victories, I believe they, as we, were simply awed time and again by her sheer beauty, courage and athleticism,” said Jess Jackson.