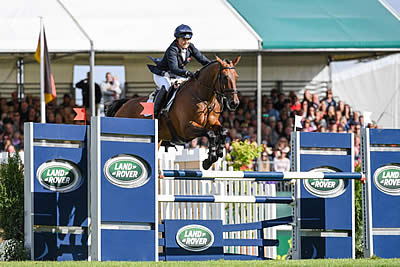 Lincolnshire, UK – Sept. 13, 2019 – As one of the world’s greatest 5* equestrian events, the Land Rover Burghley Horse Trials draws the world’s leading event riders and enormous crowds of spectators to Burghley House in Stamford, Lincolnshire for the annual four-day event. Claiming the coveted trophy for the second time in history was Britain’s Pippa Funnell and MGH Grafton Street, emerging victorious by a mere 0.1 of a penalty. While the live action took place from Sept. 5 to 8, Horse & Country TV (H&C TV)’s highlight show featuring Funnell’s winning ride as well as the other top performances, including exciting finishes from the American contingency, will air on Sunday, Sept. 15, at 8 p.m. EST.

Join H&C TV and watch the thrilling events transpire as British riders swept the competition in front of their home crowd. Never lacking excitement, the 2019 Land Rover Burghley Horse Trials feature a down-to-the-wire final show jumping phase with a field of talented athletes and horses in hot pursuit of the winning title.

Sixteen years after her first win in the 2003 Burghley Horse Trials abroad Primmore’s Pride, Funnell made her return to the top, this time aboard Jonathan and Jane Clark’s MGH Grafton Street. Funnell and the 11-year-old gelding received an impressive dressage score of 22.8 to lead the standings going into the final show jumping phase. Although the pair lowered a rail at fence eight, their determination to remain in the lead was rewarded when they clinched the overall win with an impressive score of 30.8.

“It’s been such an amazing journey and hopefully it will continue, but it’s the horses that have kept me going,” said Funnell. “He’s not the best show jumper but I’ve always been convinced he had a big win in him – what an incredible two weeks with this and the Europeans.”

Eleven horse-and-athlete combinations represented the United States throughout the competition with Lauren Kieffer and Ariel Grald earning top 10 finishes. Don’t miss out on the exhilarating highlights of this premier equestrian event, airing on Horse & Country TV on Sunday, Sept. 15, at 8 p.m. EST.

London Prepares Series (GBR), 6 July 2011 – Great Britain’s Piggy French held firm to scoop the honours in the Greenwich Park Eventing Invitational (CIC**) today with a fabulous double-clear jumping performance from DHI Topper W. Germany’s Michael Jung (River of Joy) finished second ahead of Britain’s Pippa Funnell (Billy Shannon) in third, but all the athletes were in agreement that the real winner of the Olympic Test Event has been Greenwich Park, the fabulous London venue which will host next summer’s Olympic equestrian events.

“Of course it was special to win here – we are all competitive and it was great for a British rider to put a stamp on it – but this has really been about checking things out before next summer’s Games and from that point of view it’s been a huge success,” said French this afternoon. In the lead from the outset on Monday, she had a heart-stopping moment this morning when DHI Topper W was held over during the final horse inspection, but in the end nothing could prevent her from claiming the top step of the podium.

FIRST TIME OUT
A total of 35 riders lined out in the final jumping phase, but just 12 managed to stay clear first time out. Sweden’s Sara Algotsson Ostholt lost her grip on second spot with a single mistake from her talented young mare, the seven-year-old Mrs Medicott, and Clayton Fredericks, lying overnight fourth for Australia, slipped from contention when Bendigo did likewise. This allowed Michael Jung to move into runner-up spot, but French had a fence in hand as the closing stages were played out. Funnell, now in third with the handsome Kannan mare Billy Shannon, piled the pressure on the two ahead of her with a lovely tour of the second-round track. Jung didn’t flinch to stay clean and the pressure was all on French when last into the arena. Setting off in a quiet rhythm however the 30-year-old rider calmly held her nerve to take the win she well deserved.

“Topper has matured so well over the last few months – he could be a contender for next year,” French said afterwards. “That’s still a long way away and horses are great levellers so who knows what can happen between now and then, but I reckon he’s got what it takes. I just hope we haven’t peaked too early!”