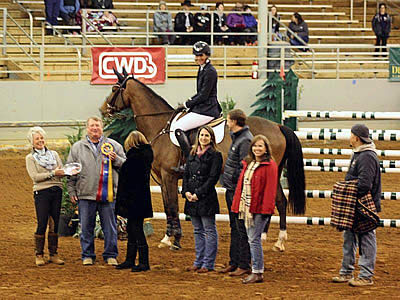 The jump off round was set with a time allowed of 42 seconds and Hicks and C’Havinia were first up. As first to go, they had four faults with a time of 29.955 seconds, leaving the win open for Rogge and Kahlua. However, as last to go, they too had four jump faults and with their time of 39.051 seconds would finish in second place, leaving Hicks and C’Havinia the winners!

Hicks returned for third place with the fastest four fault first round in the irons of Helen Gilbert’s Al Pachini. They posted a first round time of 75.194 seconds.

The Arenus Jr./Amateur Owner Jumper Classic took place on Sunday and awarded Jennie Nolen of San Antonio, Texas and Daryl Nolen’s Quasi Modo II the blue ribbon for their double clear rounds. Rico S, owned and ridden by Sara Dees of Chatom, Alabama, took the second place ribbon and Ashley Foster of Brookeville, Maryland piloted Rolling Acres’ Carlsberg to a third place finish. Fourth was awarded to Heather Zuber of Zionsville, Indiana and her own Firebird and she also picked up a fifth place ribbon with her own Phoenix. Ashley Shaw of Ellisville, Missouri and her own Capua were awarded sixth place. 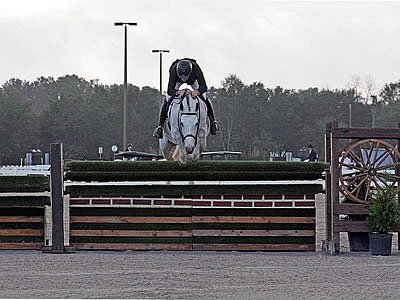 It was a double header Derby Day at the Pensacola Winter Circuit.

Tim Maddrix of Leeds, Alabama rode three horses in the $10,000 USHJA International Hunter Derby and galloped away with the blue on Alina Dumitrescu’s Shutterbug and then secured the third place with Missy Nolen’s Special and fifth place with Sarah Digiorgio’s Quarterback Z at the Escambia County Equestrian Center.

“I was really excited to win the class with Shutterbug,” commented Maddrix.  “He’s been knocking on the door for the past year and coming in second and third in the International Derbies, but this was his first win,” he said.

Sitting in sixth position after the Classic round was Liddy Strickland’s Valentine, ridden by Sarah Milliren of Jenks, Oklahoma, with a score of 158.

Maddrix and Shutterbug held their lead after the Handy round, earning a score of 185.5 for a total of 359.5.   “I thought it was a nice Handy course,” said Maddrix.  “When I walked the course, the trot jump to the oxer didn’t look too tough,” he said.  “It turned out riding it was in fact challenging because if was tight and you really had to line it up to the oxer in order to make it work,” he added.  “I think that was the biggest question in the Handy round,” he added.  “I took the low options with all three of my rides in the Handy round so I could make the tighter inside turn with them,” he said.  Coluccio and Rocking the Boat pulled themselves up from their Classic round fifth place position to finish in second overall after earning a Handy score of 190 for a combined 348.

Maddrix and Special’s second round score of 184 and combined 348 secured the third place ribbon and Milliren and Valentine moved up to finish in fourth place after earning a Handy round score of 178 for a total combined score of 336. Maddrix and Quarterback Z moved up from their first round eighth place standing to finish in fifth with a Handy score of 175 for an overall score of 325.  “That was Quarterback Z’s second Handy round ever and he was really great.  We were all really happy with how he went,” he said.

White Lightning and Julie Curtain moved from their initial second place standing after the Classic round to finish in sixth place after earning a Handy score of 155 for an overall score of 323.

Fabrege, owned by Sara Stephens and ridden by Anna Marie Mayes of Memphis, Tennessee, held their seventh place position after the Handy round earning a combined score of 316.5.

Coluccio and Burlesque moved up from their initial eleventh place standing after the Classic Round to finish in eighth place after posting a second round score of 174 for a combined 316. His other mount, El Tindo, finished in ninth place after earning a second round score of 156 for a combined 316. Mary Lisa Leffler of Brookeville, Maryland in the irons of Cynthia Hallman’s Fig Street’s Duchess finished in tenth place with an overall score of 150. Eleventh place was awarded to Cachas Fumar, owned by Rachel Eubanks and ridden by Ashley Hotz of Eads, Tennessee, for their overall score of 359.5 and Coluccio finished the class in twelfth place with Love Game after earning a combined score of 292.

“I had a great day and I really want to thank Alina [Dumitrescu], Missy [Nolen] and Sarah [Digiorgio] for the opportunity to ride such great horses,” Maddrix said.  “And I think Allen [Rheinheimer] deserves a big thank you too.  I saw him out there on Monday and he and his team were working the hunter rings and redid the footing.  It made a huge difference and we are all really pleased with the improvements,” he added.

“The people here cannot believe what a difference there is in the footing.  The show would have been cancelled today if the ring had not been re-crowned.  The footing was amazing today for all the rain we had,” commented Office Manager Jonathan Rabon.

Mary Lisa Leffler of Brookeville, Maryland is having a good Week II at the Pensacola Winter Circuit. After winning the $5,000 Horseflight Open Welcome with Bling Bling, she seamlessly moved to the Hunter Arena and rode away with the win in the $2,500 USHJA National Hunter Derby with Kirsten Pollin’s Cartagena BD after earning a combined score of 170.

Sarah Milliren piloted Courtenay Billings’ Don’t Tell to second place with score of 168 and returned to pick up the third place honors in the irons of Karen Bailey’s Troubadour with an overall score of 156. 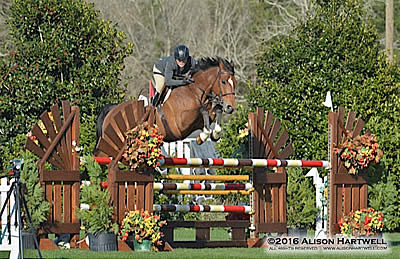 The Gulf Coast Classic Company is just days away from kicking off the sixth anniversary of the Pensacola Winter Circuit that starts on January 11th. If you haven’t done so already, it’s time to reserve your stalls and book your rooms. Reserve your stalls by December 30th with your Amex card, and you could earn 2x the points.

The Official Lodging Partner of the Pensacola Winter Circuit is the Red Roof Inn. Great rates and pet friendly. Located minutes from the show grounds, it’s the easiest lodging option and the best value.

Grand Prix take place on Saturday nights which makes it easy for riders who need to commute, and an easy option to fly out on Sundays.  The airport is only a ten minute drive from the show grounds. For those looking to enjoy the Pensacola coastal location, the pristine beaches are just a few short miles from the show and offer fabulous dining, water sports and breathtaking Gulf of Mexico sunsets.  Fun for the whole barn!

There’s a reason why the grass is greener on the Mississippi Gulf Coast. With more than a million dollars in cash and prizes awarded, the best grass Grand Prix field in the country, top Olympic and International Course Designers, new permanent stabling, covered arena, KCR footing, and parties every week, and all of this takes place within minutes of the white sandy beaches of the Gulf of Mexico.