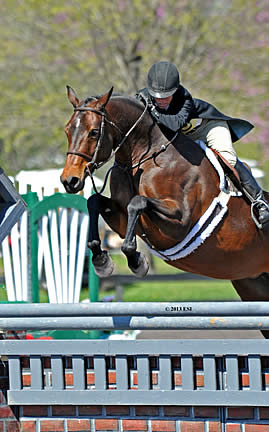 ©ESI Photography. Peg Seals and Surely led hunters in a win in the $5,000 Devoucoux Hunter Prix.

Amy Zettler continues to dominate with Glad Rags on the road to the HITS $250,000 Hunter Prix Final

CULPEPER, VA (April 22, 2013) – Virginia’s own Peg Seals and Surely, owned by Chelsea Ireland, returned to familiar territory at HITS Culpeper to capture the first $5,000 Devoucoux Hunter Prix of the spring and summer season this weekend. Seals, who spent the winter riding at HITS Ocala, has turned her focus to qualifying for the third-annual Diamond Mills $500,000 Hunter Prix Final, scheduled for September 6-8 at HITS-on-the-Hudson.

Saturday’s Devoucoux Hunter Prix featured twenty-three horse-and-rider combinations that competed over a course designed by Rian Beals of Saugerties, New York. Seals earned the top score of 87 in the first round and was poised for victory going into the final round.

“These classes are so much fun,” said Seals. “She’s [Surely] a great horse, we make a great team and I have so much fun riding and showing with her. We did the hunter prix classes in Ocala and did really well against some pretty tough competition. I look forward to a great summer ahead.”

In the second round, Seals returned last and again bested the field, earning an impressive score of 90 to guarantee the victory.

$1,500 HITS Hunter Prix
After a brilliantly successful winter circuit at HITS Ocala, Amy Zettler and Glad Rags got spring competition off to a promising start. Zettler won three $1,500 Hunter Prix classes in the irons of Glad Rags over the winter and picked up another blue this weekend in Culpeper.

After a month off, the Aldie, Virginia rider and her own mount, who she candidly calls “Primo”, didn’t miss a beat as they look making another appearance in the HITS $250,000 Hunter Prix Final. Zettler, who trains with Peter Foley and Dale Crittenberger at Woodhall Farm in Northern Virginia, was second place at the inaugural HITS Hunter Prix Final in Saugerties, New York last year during HITS Championship Weekend.

After posting the top first-round score of 88 on Saturday, she coupled that with an 87, again the top score of the second round, to secure the win.

“He’s [Glad Rags] fantastic. We had a lot of success this past winter and this class couldn’t have gone any better,” said Zettler. “I haven’t shown him since the last class we did in Ocala, but he felt great this week. I really enjoy showing in Culpeper since it’s close to home. We’ll definitely be here all summer to qualify and I really can’t wait to get back to Saugerties this September. The HITS Hunter Prix Final is what I plan my whole year around now.”

Zettler and Glad Rags also picked up the victory in the $500 Marshall & Sterling Insurance Adult Hunter Classic to wrap up the first week of showing at HITS Culpeper.

Second place in the HITS Hunter Prix was awarded to Dudley Mac Farlane and her own Amarindo, who had scores of 83 and 78, while Marilyn Vaillancourt and her own Sweet King earned scores of 77 and 81 to take home the third-place ribbon.

CULPEPER, VA (August 30, 2012) – Peg Seals and Chelsea Ireland’s Surely returned to HITS Culpeper to capture their second victory in the $5,000 Devoucoux Hunter Prix at the Constitution Classic. Earlier in the summer at the Showday National, Seals and Surely picked up the blue ribbon to become one of Virginia’s top contenders for the second-annual Diamond Mills $500,000 Hunter Prix Final September 7-9, as part of HITS Championship Weekend in Saugerties, New York.

“This is a great class and a great opportunity to win such a large amount of prize money,” said Seals of Virginia Beach, Virginia. “I really enjoyed this class and I’m lucky to be able to ride such a nice horse that’s very competitive at this height.”

The two-round class was designed by Jerry Dougherty of Bokeelia, Florida and Seals was one of many outstanding junior, amateur and professional riders. She, however, posted the top score of 89 in the first round and coupled it with an 86.5 in the second for a total of 175.5 and the win.

END_OF_DOCUMENT_TOKEN_TO_BE_REPLACED

CULPEPER, NY (July 10, 2012) – Virginia Beach’s Peg Seals scored one for the professional riders competing in Saturday’s $5,000 Devoucoux Hunter Prix as she captured the blue aboard Chelsea Ireland’s Surely to highlight the Showday National at HITS Commonwealth Park in Culpeper, Virginia.

During the Commonwealth National in April, Seals and Surely grabbed the red ribbon losing out to top amateur rider Jane Gaston and her own Lumiere. Last week, during the Showday National, Seals used a matching pair of 84s in the first and second round to secure the top prize and highlight a week of competition for hunter riders. Seals, a consistent winner at HITS Culpeper, scored her first Devoucoux victory of the 2012 season as she was the only professional rider represented in the top five.

“The field is always tough in Culpeper,” said Seals. “It was a great win and I look forward to many more this season.”