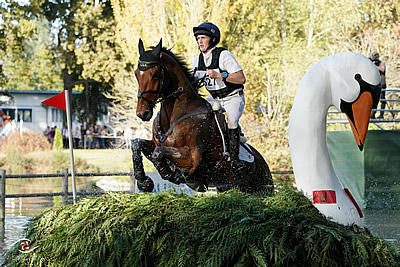 Elated after the semi-finals of the rugby World Cup, the English can also be delighted with the performance of their riders on the cross-country riders in the CCI 5*-L at the Pau 5-Star eventing competition, one of the six most demanding of its kind in the world. Already in first place after the dressage test in the equestrian triathlon, British rider Tom McEwen on his French mount Toledo de Kerser maintained his lead, with just 0.8 penalty points on the cross-country course for overshooting the authorized time. He rode home ahead of his compatriot Alexander Bragg on Zagreb, the only horse-rider pair to complete the course without a single mistake and within the authorized time. Australian rider Christopher Burton on Quality Purdey came in third with 2 penalty points. The highest-ranking French rider after two out of three tests, Olympic team champion Mathieu Lemoine, ranks ninth on Tzinga d’Auzay. It’s the young mare’s first CCI 5*-L competition, at the highest level in the international eventing competition classes defined by the Fédération Equestre Internationale (FEI).

“The course rode exactly as I expected it to when I walked it yesterday: very technical at the start, with lots of turns. The next section was more fluid and I really enjoyed riding the course. For the show-jumping competition tomorrow, I wouldn’t want any other horse: Toledo is a great jumper and it’s up to me to make sure I don’t make any mistakes.

“You had to be concentrated from start to finish when riding the course, because there were potential incidents all the way along. There were some imposing obstacles and sizeable jumps to negotiate at several different points, and there was nowhere really to make up lost time.”

“Zagreb is a big horse but hasn’t really got that big a stride. I had to be firmly in control and negotiate the combination fences without slowing him down too much or changing pace. It was a very fluid ride, and I really enjoyed it, especially as it’s the first time here in Pau that I finished within the authorized time.  He’s a great jumper too and in general he responds really well to the sunny French climate, the surface here and the crowds. So it’s going to be a nail-biting competition right up to the end.

“It was a perfect course, a course for riders who make decisive choices and totally assume them.  There was no room for half-choices, and that’s a sign of an intelligently designed course, a fair course for both horses and riders, but which can cause incidents as we saw today.”

“I’d like to congratulate course designer Pierre Michelet who did an incredible job today. The course was amazing to ride, because it was difficult to ride home while the clock was still green. My horse was great today too, and we’ll do our best tomorrow too. She’s a good mare, but we know that here in Pau, the courses can be extremely technical so we’re crossing our fingers that everything will go well on Sunday.

“When riders have walked the course, I think they come away thinking that everything is feasible and it doesn’t look that difficult, but in the end, there were incidents on almost all the fences, which is a sign of a well-designed course, and an incredibly intelligent course designer.”

“Tzinga was tired at the end of the course, but I’m really pleased with her performance today. It was a demanding 5-star cross-country course and it was the first time she has competed at this level. As it is her first 5-Star event, I don’t know how she’ll recover before the show-jumping competition tomorrow, and it’s not easy to make a clean round on a show-jumping course with her. Anything could happen, but I’m really delighted with the way she rode today.”

“I knew that the first part of the course was going to slow the horses down. Then in the second part, where the riders can gallop through the training centre, the combination fences also slowed the pace. The surface was very soft as it has rained a lot over the last few days. If the surface had been dry, perhaps it would have been easier for the riders to complete the course within the authorized time and we would have had a few more zero penalty rides. Some of the riders perhaps underestimated the course and there were more difficulties than they first thought, like the water in the middle of the track, that looks simple, but caused a few incidents, just as I thought it would.”

“Pau is historically a very English town, and they proved it today before the record crowds we had here today, probably the highest attendance rate we’ve ever had at the Pau 5-Star event. It’s a real honour to work with a course designer like Pierre Michelet and when I ask him to set the difficulty at a certain level, he sets it exactly where I want it.” 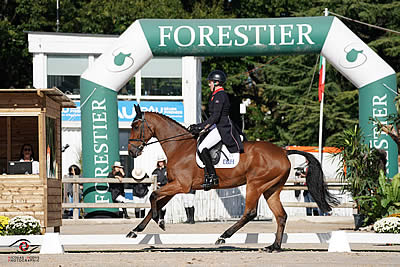 British rider Tom McEwen, currently ranked world no. 12, takes first place at the top of the provisional leaderboard after dressage on Toledo de Kerser (24.0), just ahead of the New Zealander Tim Price, ranked world no. 3, riding Wesko (25.6). The highest-ranking French horse-rider pair, Arnaud Boiteau on Quoriano*ENE HN, comes in fifteenth place in the provisional rankings before the cross-country event (33.2).

“I’m delighted to be in first place on the provisional leaderboard after the dressage test.  I could tell that my performance was very smooth, and I think that’s what the judges were looking for today. There’s a lot of good competition in the CCI 5*-L Pau 5-Star event, and I’m really looking forward to tomorrow’s cross-country event.”

On the cross-country course: “I really came here expecting a twisty track. But now I’ve walked it, it is tricky, but in general a really fluent track with some big fences and positive lines. I wouldn’t say that there are difficulties in one specific area: there are some really big questions all along the track. Perhaps the first water, with the sequence of five very close jumps in sequences: it’s a bit like doing Spring Garden at home, so you need to keep some energy for the end of the course. Then there’s a really big final fence with a difficult corner. The last water is perhaps also a difficulty.”

On Toledo de Kerser: “He’s a really great horse! The start and finish sections of the course are fairly twisty at the start and finish, but there are some really open stretches in the middle where you can make up time. Toledo knows how to handle it all so I’m feeling confident about tomorrow.”

You will find all the results here: https://www.worldsporttiming.com/results/les-5-etoiles-de-pau-2019-265/schedule.html 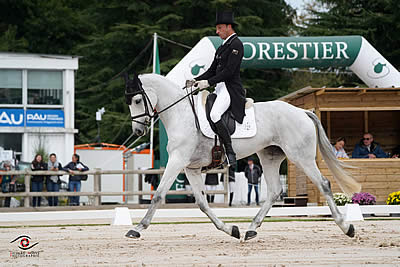 The 5* eventing competition is well underway! The first fourteen riders on the starting list for the CCI-L 5* competition in the Pau 5-Star event performed their individual tests at the Domaine de Sers. One of the riders to watch in this competition is New Zealander Tim Price, current world number 3 and winner of Le Lion d’Angers World Breeding Eventing championship last weekend in the seven-year-old category. He currently leads the provisional ranking here in Pau, riding his eleven-year-old mare, Ascona M. Ensemble. This year Price and Ascona already won the Lumühlen CCI-L 5*, one of the six most prestigious eventing competitions in the world, an elite circle in which the Pau 5-Star event has its rightful place.

In the French camp, the two riders on the starting list for the dressage tests ranked sixth, Arnaud Boiteau with Quoriano*ENE HN, and tenth, Régis Prud’hon, riding Vanda du Plessis.

You will find all the results here: https://www.worldsporttiming.com/results/les-5-etoiles-de-pau-2019-265/schedule.html. 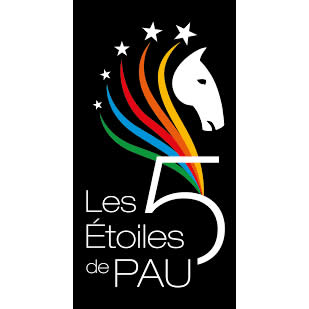