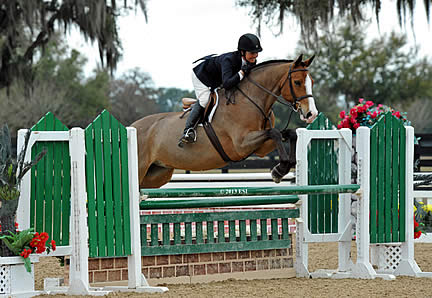 OCALA, FL (February 25, 2013) – Patty Stovel of Chester Springs, Pennsylvania pocketed a $5,000 Devoucoux Hunter Prix earlier in the season at HITS Ocala and returned to the winner’s circle for the second time this weekend. She and Michelle Durpetti’s Kenya rode to a score of 171 with Shachine Belle of Farmington, Connecticut pressuring her in second with a 170 aboard Mr. & Mrs. Ernest M. Oare’s Tryonite.

“The Outside Course rides really well and all the options keep things interesting,” said Stovel of the newly designed ring. “The bank adds just enough difficulty to make the class fun.”

Stovel is no stranger to sitting atop Kenya as she sold the nine-year-old Dutch Warmblood to his current owner and was asked to continue riding him. Durpetti and Stovel believe Kenya has what it takes to be competitive in the Diamond Mills $500,000 Hunter Prix Final during HITS Championship Weekend this fall in Saugerties, New York and are pointing the gelding toward qualifying and competing in the big-money event.

“He was great today and has a really good chance of being competitive in Saugerties,” said Stovel.

Belle, who has ridden to two Devoucoux Hunter Prix wins aboard Robin Swinderman’s INXS this season, rode two new top-five finishers this week. She and Tryonite led the first round with a score of 88 before earning an 82 in the second. Belle also rode Michael Renker’s Wicked to fourth. They combined an 84 and 82 for a total score of 166.

Therese Peck and Cammy Turgon’s Scoop finished third with a score of 167 and Megan Wexler stepped from the grand prix to the hunter ring for a fifth-place finish aboard Kathryn Mittauer’s Allawishus. They earned a pair of 82s for a 164 total.

Devoucoux, the makers of fine French saddles, will continue to present weekly hunter prix, which represent the only way for hunter riders to punch their ticket to the prestigious Diamond Mills Hunter Prix Final during HITS Championship Weekend in Saugerties in September.

Amy Zettler of Aldie, Virginia admits that her number-one goal for HITS Ocala this year is to qualify for the HITS $250,000 Hunter Prix Final again in Saugerties and to place higher than she did last year. But, for Zettler, higher is winning. After finishing second in last year’s debut of the HITS Hunter Prix Final, she and her own Glad Rags are chasing down the blue in 2013 and are off to an impressive start with three top-five qualifying finishes so far this season, including today’s $5,000 HITS 3’ Hunter Prix win.

Lena Rae Reeb of Weston, Connecticut boasts four top-ten finishes in the HITS Hunter Prix this season at HITS Ocala. After riding to the top in the first-ever Children’s Hunter Pony Final in Saugerties last year, Reeb is now pointing Jamie Ringel’s Private Ryan at the HITS Hunter Prix Final. She earned an 81 and an 84 for a total of 165 and second place this weekend, and was also fourth aboard Sonia Ramirez’s Amsterdam with a 163.

Dorian Cieslak of Altamonte Springs, Florida rounded out the top three with her own VDL Uniek, and Nicolas Horgan was fifth on Winsor Farm Sales, Inc.’s Captain 33.

Zettler combined an 88 and a 79 for a 167 and the win this weekend. “Glad Rags is just a true winner,” she said of the 10-year-old Thoroughbred-Warmblood cross gelding that she has owned for three years. “He was coming off of a three-month break at the start of Ocala and he stepped back into the ring and started winning. We only jump him at horse shows and he loves doing it. He likes to be the center of attention.”

Glad Rags is Virginia-bred by Steve and Sally McVeigh of Middleburgh, who are still very involved with the gelding’s successes. “I call them after every class – it is so nice to have breeders who care about their horse,” said Zettler.

After finishing second last week in the Hunter Stadium, Zettler, trained by Peter Foley and Dale Crittenberger, was eager to return to HITS Ocala’s all-new Outside Course this weekend. She admits that the new ring is perfect practice for the setting of the final, which will take place on the popular Outside Course at HITS-on-the-Hudson during HITS Championship Weekend September 6-8.

CULPEPER, VA (August 20, 2012) – HITS is back in Virginia and Patty Stovel got things started in the Grand Prix ring this weekend with a win in the $40,000 HITS Grand Prix, presented by Pfizer Animal Health, aboard her own Carigor Z. Nineteen horses took to Jerry Dougherty’s 13-obstacle course and six conquered it to move onto the jump-off.

“This course was very careful, but it fit the group of horses that showed up to jump it very well,” said Stovel.

After watching six rounds, three of which were clear, Stovel and her 11-year-old Argentinean gelding made it four and joined the jump-off. Stovel and Carigor Z have been together since she purchased the horse as a three-year-old.

END_OF_DOCUMENT_TOKEN_TO_BE_REPLACED

CULPEPER, VIRGINIA (August 22, 2011) — Patty Stovel and Shoal Creek Stables’ Kenya gained the momentum they needed in Culpeper to capture Saturday’s $5,000 Devoucoux Hunter Prix to highlight a week of tough competition in the hunter rings of the Winston National at HITS Commonwealth Park in Culpeper, Virginia.

The duo’s latest victory marks their third triumph in a Devoucoux class this summer as they topped the field of 22 that showed over course designer Rian Beals’ first-round course. “Kenya is getting better as the summer goes on and that is a good thing,” said Stovel. “I am very fortunate to have a great owner who let us take our time with this horse.”

The last time the duo showed at HITS Culpeper they scored the blue at the Cavalier Classic in the featured class for hunters. Then, a few weeks ago, they struck glory again topping 70 starters at the NY Horse & Pony Show at HITS-on-the-Hudson in Saugerties, New York proving they are one of the teams to beat in the Diamond Mills $500,000 Hunter Prix Final.

Going into the weekend, Stovel and Kenya were eighth in the current Rider Rankings for the Diamond Mills Hunter Prix Final with 224 points. Saturday’s win will help to push them into the top five with only two qualifiers left before the big weekend on September 10-11 in Saugerties.

“I have said it before. This horse can win on any given day!” said Stovel. “There will be some great horses and great riders there and I am sure hoping that we are up for the challenge.”

END_OF_DOCUMENT_TOKEN_TO_BE_REPLACED

SAUGERTIES, NEW YORK (August 8, 2011) — Patty Stovel, of Chester Springs, Pennsylvania and Shoal Creek Stables’ Kenya scored another victory in the $5,000 Devoucoux Hunter Prix as they topped a field of 70 starters in Saturday’s featured class for hunters during the NY Horse & Pony Show at HITS-on-the-Hudson in Saugerties, New York.

Hunter riders are down to the wire with only three qualifiers remaining for September’s Diamond Mills $500,000 Hunter Prix Final. Two more $5,000 Devoucoux Hunter Prix will take place August 20 and 27 as HITS moves south to Culpeper, Virginia for the Winston National and Constitution Classic at Commonwealth Park.

In Saturday’s class, Stovel and Kenya posted a score of 85, the third highest, in the first round over Rian Beals’ course. Heritage Farm’s Patricia Griffith of New York, New York set the pace in the first round scoring an 87 aboard Lyn Pedersen’s Mahalo.

Stovel and Kenya recently won the $5,000 Devoucoux Hunter Prix during the Cavalier Classic at HITS Commonwealth Park in Culpeper, Virginia.

“This horse is really coming into his own,” said Stovel. “We did the Hunter Prix classes last year and got some ribbons, but now he is a little more mature and seems to like them!”

END_OF_DOCUMENT_TOKEN_TO_BE_REPLACED

Stovel of Chester Springs, Pennsylvania and Kenya were the top horse-and-rider team out of the 34 that showed over Saugerties, New York course designer Rian Beals’ first-round track. They also sat atop the 12 pairs that advanced to the second round as they scored a first-place check. More importantly, the talented duo added their names to the list of top contenders for the Diamond Mills $500,000 Hunter Prix Final, which is scheduled to roll into HITS Saugerties in September.

“There were some great horses and riders in this class, and for us to come out on top – proves that we belong,” said Stovel. “I am heading up to Saugerties for the next three weeks, where I plan to show in the Devoucoux Hunter Prix, which will be a huge advantage since the big class will take place right in Saugerties.”

Stovel finished on Sunday with a total score of 175 and led the charge at HITS Culpeper, boasting the top score in both rounds and winning the class by 10 points. Jonelle Mullen Stern, of Warrenton, Virginia, rode Carolyn Williams’ Delorian to a second-place effort and junior rider, Emma Kennedy of Ocala, Florida, took third aboard Donald Stewart’s Van Guard.