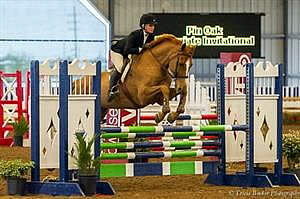 The Invitational was one of the featured events of the concluding day of the Pin Oak Charity Horse Show I. The event, presented by Max Bowl and the Boatright, Dougherty and Roberts families, brought eight student athletes together for head-to-head competition on catch rides.

The class followed the current Varsity Equestrian bracketed format. Riders were paired at random for the preliminary rounds, where they competed head-to-head on the same horses. Each rider with the highest score then moved forward to the second round, and then the top two individuals rode-off on the same horse to determine the champion.

“I felt like he was a horse I could go out there on and try to impress the judge, so that’s what I aimed for from the get go,” she said. “I just tried to ride forward, get him up to the jumps and hold him together. I knew he had a nice jump, so I wanted to show that off and show that I could get his best jump.”

Parker’s score of 82 topped Savage’s 78 for the championship.

“I really wanted to win this because the last two meets I came off upsetting loses for me,” said Parker. “This year I’d gone undefeated in fences, and the past two meets I lost. It was pretty weak on my part, so I told my coach, ‘I’m going to win this to make it up for it.’ So I really did want to win it.”

Parker’s first ride was David Cook’s Texas Checkmate, above, and she scored a 78 to advance to the second round where she guided Patty Roberts’ Capello to an 82.

“She was beautiful today, so consistent,” said Baylor Coach Anna Schierholz. “She was the most consistent girl out there. She definitely followed the game plan, read her horses very well, read the courses very well. It was very smart riding all the way through, and she definitely earned her championship today.”

Parker, originally from Medford, New Jersey, rode with Tustin Farms as a junior, which prepared her well for the Varsity Equestrian format. She started at Baylor as a preferred walk-on and then earned a scholarship. She’s now one of the team’s starters.

“I love the head-to-head competition,” said Parker. “I get really nervous watching my girls go, but I don’t get as nervous for myself. It’s a lot different than the juniors, and I like getting on a lot of different horses. I catch rode a lot during my junior career, so it’s something I’m used to, getting on different types of animals and learning to ride all of them.”

“Paige is absolutely instrumental to our success every single day,” added Schierholz. “In the barn, in the classroom, on the back of a horse, she really makes it happen for us. We adore her, and she’s phenomenal.

“I want to thank everyone, the sponsors of the class, the horse donors, the course designer, our judge Carl Hansen, everybody involved in putting this on today,” continued Schierholz. “They all did a great job, and we had a great time.”

Arabel McFarland’s Bravado, the horse used in the final bracket, was named The Best Horse of the competition by Judge Hansen.

July 22, 2012 – The twentieth anniversary of the Charleston Classic closed yesterday with a bang with the $25,000 KnickerDoodles Pony Hunter Derby.  This was the second installment of the largest pony hunter purse in the country and the ponies were out in full force!  Twenty five pony and rider combinations tackled the course designed by Allen Rheinheimer and Joe Carnicum which saw Paige Parker riding Champlain Sovereign, owned by The Hill Farm, in the winner’s circle with a combined score of 176 points.  In second place was Bergen Sanderford riding Center Ice, owned by Maria Yzerman, with a total score of 162, and third place honors went to Grace Gresset riding her own Daisy Due Blue with a combined effort of 156 points.

“This is only the second time we have offered this class and we were very pleased with the turnout.  It was a great way to celebrate our twentieth anniversary of the Classic Company,” said Bob Bell, President of Classic Company.

END_OF_DOCUMENT_TOKEN_TO_BE_REPLACED

Johns Island, SC — July 24, 2011 — The final week of the Charleston Summer Classics held at Mullet Hall Equestrian Center was much like an adventure packed vacation itinerary. One moment you’re enjoying the sport with friendly competitive rivals, then shopping together for the social gatherings.

This was also the week where the Wee Warriors of the Pony divisions battled for the coveted titles of Grand Pony Kahuna and the glory of being named Most Supreme Pony Kahuna. “I started the Kahuna competition as a fun method for our pony riders to prepare for the USEF Pony Finals, the scoring uses the same numerical judging system with daily accumulated points moving forward to their respective division Classic rounds. We award a Supreme Grand Kahuna in each of the six divisions and an overall Most Supreme Grand Kahuna Champion. The prizes are nice – Essex Classic Shirts, custom Cooler, featured in an Ad – but the best reward is the knowledge and experience they can take into Pony Finals,” Classic Company president Bob Bell said.

The 2011 Most Supreme Grand Pony Kahuna is Paige Parker partnered with Champlain Sovereign, owned by The Hill Farm. This marked Paige’s second occasion as top Pony Kahuna having won the title in 2009 with Cherrybrook Skye Blue.