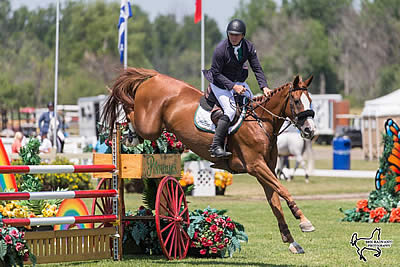 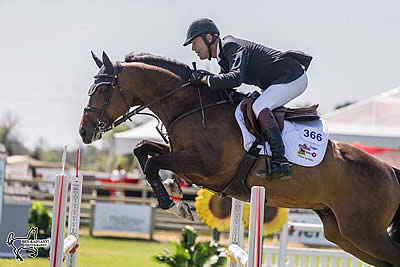 Ottawa, Ontario – Ten-time Canadian Olympian Ian Millar of Perth, ON kicked off the Ottawa National Horse Show by claiming the top two spots in the 1.35m Open Jumpers, presented by Omega Alpha, on Wednesday, July 11, at Wesley Clover Parks in the heart of Canada’s national capital.

Millar took over the rides on both Ericson and Truman for his daughter, Canadian Olympian Amy Millar, who is expecting her second child.  Ian will look to continue his success with both horses throughout the two weeks of top show jumping competition at Wesley Clover Parks, with the Ottawa National Horse Show continuing through July 15 followed by the CSI3* Ottawa International Horse Show from July 18-22.

“I’ve been enjoying Ericson immensely, but he’s just on loan,” said Ian of the nine-year-old Dutch Warmblood stallion (Padinus x Iroko). “He’ll go back to Amy; she’s in really great shape, and we’re all very excited for her and looking forward to welcoming her new son next week. I know she can’t wait to get back to her horses, too.”

For Ian, competing and winning at Wesley Clover Parks is particularly special, as he has spent much of his career competing at the facility and has been instrumental in developing the Parks’ riding school program and on-site competitions.

“I grew up in this area,” explained Millar, 71, who is competing at the Ottawa Equestrian Tournaments alongside his son, Jonathon, and daughter-in-law, Kelly Soleau-Millar. “Now here we are in Ottawa, doing this and bringing top international competition to the city. It would not happen without the Matthews family and Wesley Clover Parks, and it’s an honour to be involved in it and to be able to say to our friends and neighbours, ‘hey, this is what we do all over the world; now you can come and see it right here in Ottawa!’”

Echoing similar sentiments was Lauren Hayes of Orangeville, ON who topped a 49-horse starting field to win Wednesday morning’s 1.25m Open Jumper competition aboard Faloma, an eight-year-old mare owned by Norman Amondsen. Hayes has been competing at Wesley Clover Parks “since the beginning,” and her family ran the horse show for four years prior to the Matthews family and the Wesley Clover Parks Foundation taking over the management in 2013.

“They’re doing a fabulous job,” said Hayes, 37, following her win over the track set by Canadian course designer Michel Vaillancourt. “The field is great; it’s always been a really nice field to jump on, and the atmosphere here is great. They incorporate the city and the spectators, and they really do a great job making it feel like a special horse show.”

As for her mount, Hayes explained, “I just got the ride on Faloma two weeks ago. She jumped great today. She was brave, and she walked right out there like she owned the place!”

Taking Wednesday’s final victory on the grass grand prix field to conclude a successful opening day of competition was Kerrigan Brown of King City, ON. She and her mount, Colibri, won the 1.30m/1.40m Junior/Amateur competition, presented by Flow Water.

“We’re very excited to be back for our fourth year of the Ottawa Equestrian Tournaments, and we’re off to a great start,” said Karen Sparks, Executive Director of Wesley Clover Parks. “We’ve made some infrastructure changes that I’m really excited about, and they’re being well received. We put in a new warm-up ring and we made some tweaks to the stabling area to make it even more comfortable for the horses on site.

“We also have CIBC Wood Gundy on board as a new sponsor for our $15,000 National Grand Prix next week which is really a lovely addition and a great way to end the horse shows,” continued Sparks. “We’ve got great weather, and we couldn’t be happier to have our tournaments underway!” 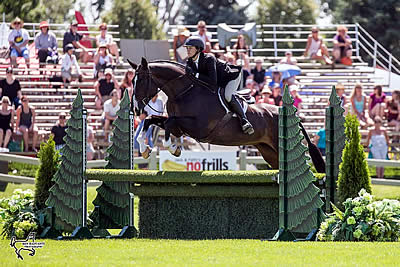 In her hunter derby debut, Dubois-Emond topped a large starting field of 59 entries riding Castello, a 13-year-old Oldenburg gelding owned by Colleen McKenzie.  The pair earned a total score of 103 points from the judges, including ten bonus points for taking all of the high option fences offered throughout the course.

“I’ll definitely do that again!” said Dubois-Emond, who normally competes in the show jumping divisions.  “This is my first hunter derby ever.  I’ve never done one; I’ve never really ever even watched one.  Before riding Castello, I had not done the hunters since I was a kid, so this was really a lot of fun today.”

Finishing in close second to Dubois-Emond and Castello was Ryan Roy of King City, ON and Bayridge, owned by Doug Bannister.  The pair was one point off the lead, earning a score of 102 points while Isabelle Lapierre of Levis, QC placed third with a score of 101.5 riding Excellent Balou, owned by Gabrielle Buisson.

Renowned Canadian course designers Evie Frisque and 2015 Jump Canada ‘Official of the Year’ Chris Brandt set a challenging track on Wesley Clover Parks’ expansive grass grand prix field that attracted the most entries ever seen in a Canadian Hunter Derby Series qualifying event.  Horses and riders competed over specially-constructed natural obstacles, and bravery was tested as they galloped down through the dreaded devil’s dyke.

“Castello was great today; he’s the simplest horse I’ve ever had to deal with,” said Dubois-Emond, who began riding the horse in January for McKenzie.  “Now I’ll probably aim to do the next event [in the Canadian Hunter Derby Series].” 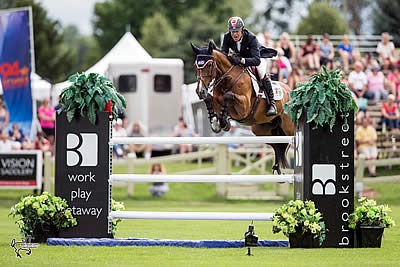 Ottawa, Ontario – Ten-time Canadian Olympian Ian Millar, known as ‘Captain Canada’ to his fans, added another win to his extensive resume by taking victory in the $50,000 Brookstreet Hotel Grand Prix, on Saturday, July 16, at the Ottawa National Horse Show at Wesley Clover Parks in Ottawa, ON.

The large crowd at Wesley Clover Parks witnessed great sport as nine of the 33 contenders jumped clear to advance to the jump-off.  Millar of Perth, ON was the seventh rider to return for the tie-breaking jump-off aboard Teddy du Bosquetiau, a 13-year-old Belgian Sport Horse gelding owned by Emily and Fiona Kinch.  The pair made easy work of the jump-off track, leaving all the rails in place and coming home in a time of 42.43 seconds.

“This was definitely the fastest I’ve ever ridden Teddy,” said Millar.  “He’s really, really fast, but what happens to him sometimes is that his feet get going faster than his brain.  Then rails can come down because of that.  So as you’re riding him, you try to keep the two in sync.  It’s about knowing your horse, and I was quite thrilled with him today because this was a fast jump-off.  I knew my time would be hard to beat.”

Melissandre Lincourt of Montreal, QC immediately followed Millar and gave him a run for his money over the course designed by 1976 Olympic individual silver medalist Michel Vaillancourt.  She came close, stopping the clock in 43.79 seconds to finish second riding Just Stella L, a ten-year-old Oldenburg mare owned by Gabrielle Pelchat.

Millar’s son, Jonathon Millar, also of Perth, ON, jumped clear in the jump-off with a time of 43.87 seconds to place third with Daveau, an eight-year-old Dutch Warmblood gelding owned by his family’s Millar Brooke Farm.

For Ian, competing at Wesley Clover Parks is incredibly meaningful, as he has spent a lifetime riding at the facility and has been instrumental in developing the riding school program and competitions on-site throughout the years.  He has been an advisor to the Wesley Clover Parks organizing committee, headed by Karen Sparks, since it took over management of the facility in 2013 and reintroduced world-class show jumping to the nation’s capital in 2015.

“This is where I really learned about show jumping when I was 15 years of age,” said Ian of the facility now known as Wesley Clover Parks.  “This is where I really started with two-day eventing, three-day eventing, and the jumpers.  The big shows were in Montreal and Toronto; we were sort of the bush league back then.  So when the opportunity came along years ago to get this place going and get a show here, I was so excited to do it.  To be able to bring show jumping to this area was very important to me, and to all of the people on the committee.

“As time went on, the horse shows sort of got into a little difficulty and faded out,” continued Ian.  “Then, because of the Matthews family and its Wesley Clover Foundation, the park has been put back together and on the map.  The riding school and the show operation are doing fantastic, and these horse shows are back in Ottawa and better than ever.  Within the horse show community, we’re getting rave reviews about the show this year, as we did last year.  I would say the future is very bright for Wesley Clover Parks.”

Ian’s own future is also looking bright.  The Canadian Show Jumping Team for the 2016 Rio Olympic Games was announced during the Ottawa National Horse Show, and Ian’s daughter, Amy, was named to the four-rider squad.  While the elder Millar will not be riding in Rio, he debuted a new horse, the eight-year-old Hanoverian stallion Vittorio 8, at the Ottawa National Horse Show.

Where did Ian go to find a new grand prix partner?