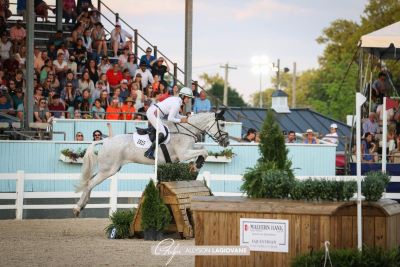 Devon, Pa. – May 29, 2022 – One of the Devon Horse Show’s most popular events, the $50,000 Arena Eventing, sponsored by Malvern Bank, took center stage Sunday evening, welcoming some of the sport’s top three-day event competitors and their mounts to the iconic showgrounds. Since its inception in 2017, the special class has been highly anticipated and supported by some of eventing’s most esteemed riders. At the conclusion of two action-packed rounds of competition, it was the 2017 inaugural victor Sara Kozumplik and Rubens D’Ysieux who went home with the Devon blue and the lion’s share of the prize money.

The Children’s Jumper division concluded at the 2022 Devon Horse Show Sunday following two days of exciting competition in the Dixon Oval. A total of 20 horse-and-rider pairs put their best foot forward in three total classes hoping to accumulate points towards the division’s overall standings. At the conclusion of the third and final leg of the championship, $2,500 NAL/WIHS Children’s Jumper Classic, sponsored by Westover Companies/Guntram Weissenberger, Jr., Olivia Sweetnam was presented with the tricolor ribbon for her stellar performances on Just Noble throughout the weekend. Sweetnam swept the division, winning all three classes and ultimately receiving the Leonard Tose Memorial Challenge Trophy with a total of 35 points.

Carriage competitors returned to the Dixon Oval at the 2022 Devon Horse Show Sunday, eager to perform before the judges in hopes of taking home a Devon blue ribbon. At the conclusion of the final judging in the Champion Drive-Off, it was John White who took home the Carriage Pleasure Drive Championship. 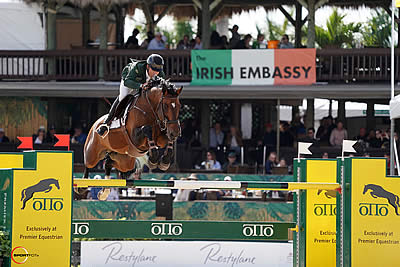 USA’s Ken Krome set a two-round track for 50 challengers in the final event of the week, and saw eight qualify for a tie-breaking jump-off. Lambre saved the best for last as the final jump-off rider. He and Catover were fast and precise to stop the clock double-clear in 37.73 seconds for the win over Ireland’s Shane Sweetnam and Chaqui Z in 38.29 seconds.

“He is amazing,” said Lambre of Catover, an 11-year-old Holsteiner stallion (Catoki x Contact Me) owned by Mario Onate. “I have had him since he was eight, and I flat him almost every day but I’ve only actually been riding him seriously since October of last year in preparation for Tokyo. We all have Tokyo in mind this year; it’s our dream. It’s a difficult year to qualify for the team in every country, but we have also so many nations cups and so many shows that we can go in. It’s promising.”

“He’s been so awesome, and we have such a great partnership,” Lignelli commented. “Every time I get on him, he always tries his best and he is very respectful of everyone that gets on him.”

A last-minute switch gave Sweetnam the ride on Not So Secret, a 14-year-old gelding by Tapu Kid McCoy and owned by Eva Mackenzie. Even though Sweetnam had only ridden Not So Secret one time before showing him, that did not stop the pair from rising to the top of the class.

“You can kind of just float the reins and he will spot in on the jump,” Sweetnam explained. “A lot of the ones I show now are a little greener, so it was nice to get on one that knows its job.”