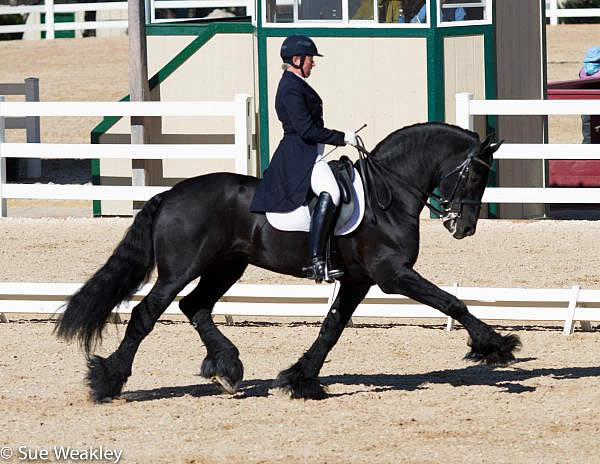 Parker, CO – May 31, 2013 – Nicole Glusenkamp and Eeltsje F, a Friesian stallion owned by Paula Marsh of Wyning Edge Friesians in Boerne, Texas, claimed the win in the Grand Prix Open with a 65.904% in the first day of dressage at the High Prairie Dressage I, II, and III at the Colorado Horse Park (CHP) in Parker, CO.

Glusenkamp, a hometown trainer based in Parker, has had the ride on the Friesian for eight years. She said Eeltsje F was a bit tired from breeding last week, but the horse was steady, even in the blustery winds on Friday at the Horse Park. “It’s not a problem for me, because my horse doesn’t care,” she explained. “Nothing bothers him. I haven’t met anything that bothers him yet.”

She added that she enjoys coming to the Colorado Horse Park where the facilities are top-notch. “You know they always do a great job,” she said. She was particularly impressed with the new GGT-Footing the Horse Park installed. “It’s really nice,” she said. “The horses like it!”

Glusenkamp and Eeltsje F performed a solid test with smooth tempi changes and transitions. Taking second place in the Grand Prix Open behind Glusenkamp was Shannon Dahmer on Rock On with a 65.479%.

Dressage newcomer Andrea Caudill from Amarillo, Texas, had reason to celebrate on her own Haidaseeker Playboy, who scored a 57.632% to take third in the Prix St. Georges – Amateur/Junior/Young Rider class.  “It was our first try at Prix St. Georges,” she said.  “He is an American Quarter Horse and this is my first dressage horse!”

The horse is a money-earner and winner in reined cow horse, they show in the Panhandle Reined Cow Horse Association in the Texas Panhandle and they entered the Reined Cow Horse World Show in January.  Although she and Haidaseeker Playboy, whom she calls “Matt,” currently compete in boxing, a cutting discipline within reined cow horse, as well as reining and endurance racing, she decided she wanted to tackle a new challenge – dressage.

“Some friends of mine were doing it and we decided to try it and we’ve been climbing the levels,” she said. “It’s been a lot of fun! I’d never even ridden a dressage horse before. And we just keep moving up.  He just started doing piaffe and passage last fall.”

Although she trains Matt herself, her dressage instructor, Michelle Just-Williams of Ocala, Florida, gives her pointers via Skype.  Caudill live-streams her lessons over the computer and Just-Williams coaches her student on a screen.  Caudill started at first level when Just-Williams began instructing her and they are now at Prix St. Georges.  “She has taught us how to do this over the phone.  So, where there’s a will there’s a way. ”

“That’s why I got a Quarter Horse!” she said. “If you want to do it all…” She is a walking advertisement for the breed and said the Quarter Horse is the perfect partner for any discipline – including dressage.

The action continues at the Colorado Horse Park with Dressage at High Prairie II and III on Saturday and Sunday.

Tentative Schedule:
Friday – Sunday: Unofficial Times will be mailed to all exhibitors prior to the show, and will be available on www.cornerstonedressage.com. Official times will be posted every morning one hour before the first scheduled ride.

Helmet Reminder: Effective April 1, 2013, for dressage: Anyone mounted on a horse must wear protective headgear.