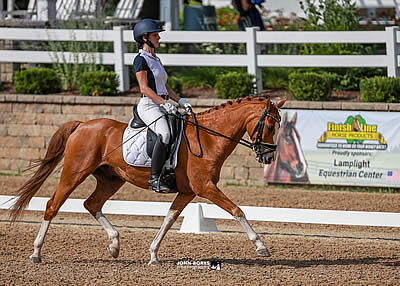 Lake St. Louis, Mo. – May 7, 2020 – The organizers of the National Dressage Pony Cup (NDPC) and Small Horse Championship Show regret to announce the cancellation of the 2020 event, which was scheduled for July 17-19 at the National Equestrian Center in Lake St. Louis, Mo., due to ongoing uncertainty surrounding the COVID-19 pandemic.

Last year’s NDPC show was a record-setting event, with 250 entries representing more than 25 U.S. states and Canadian provinces as well as 35 different breeds of ponies and small horses, all competing for top honors across 51 championship divisions from the Intro Level to Grand Prix.

Founded in 2007 by Jenny Carol in order to showcase and promote ponies competing in dressage, the NDPC has continued to grow in size and enthusiasm each year. With the addition of small horse championship divisions in 2018, the NDPC has become a destination event for pony and small horse dressage enthusiasts of all ages and backgrounds from across North America. But that widespread appeal is also a big part of the reason why Carol has made the tough decision to cancel this year’s competition in light of the ongoing effects of COVID-19.

“I have agonized over this because I realize that the Pony Cup is something that so many people look forward to every year,” said Carol. “But as much as we want to see everyone this summer, we have come to the conclusion that in light of all that’s happening with the COVID-19 pandemic, cancelling the show is the most responsible thing to do.

“We realize that there is still so much uncertainty about COVID-19, and it is a very fluid situation. Travel restrictions may remain in place for some time, and on top of that we feel like we simply cannot in good conscience ask people to drive across the country and Canada to gather at a large horse show like ours and possibly endanger their health,” Carol continued. “Also, many people are impacted financially, and some haven’t even been able to go ride their ponies and prepare for competition due to stay-at-home orders and barn closures. And last but not least, the Pony Cup is about so much more than just riding tests in the arena – it’s a fun, social event for everyone. We feel like if we were to try to hold the show this year, it would have to be with so many precautions and restrictions that it just wouldn’t be the same experience our competitors have come to expect.”

Although heartbroken at the decision to cancel this year’s event, Carol encouraged competitors to look forward to coming back to the National Dressage Pony Cup & Small Horse Championship Show in Lake St. Louis, Mo. in 2021. Also, at this time, the Dressage Sport Horse Breeding divisions of the National Dressage Pony Cup Championships are still scheduled to run as originally planned at Dressage at Devon, from September 22-29, 2020 in Devon, Pa.