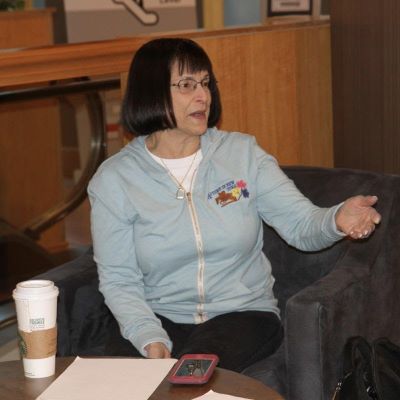 FAIRFIELD, Conn. – Dec. 15, 2020 – The Intercollegiate Horse Shows Association (IHSA) leadership is saddened to announce that Naomi Blumenthal passed away peacefully Dec. 13, surrounded by her family. Blumenthal, 78, from Manlius, New York, served the IHSA for over 40 years. She taught equestrian studies and equine business management at Cazenovia College for 27 years and was a coach of the Cazenovia College IHSA Equestrian Team. She was a longtime member of the IHSA board of directors, first as a regional president, then as zone chair and for many years as executive treasurer.

“She helped a lot of people in the horse industry get a leg up,” said Peter Cashman, IHSA executive director. “People will never know how many she’s helped. She always thought about other people. She was a self-made woman and could be tough but had a soft heart. As a human being, she was tops. She will be thoroughly missed. There will be a void without Naomi Blumenthal.”

Bob Cacchione, the founder of the IHSA, first met Blumenthal as a new coach at Cazenovia College. Their friendship spanned over 40 years.

“I can’t begin to say how much her heart and soul were invested in the IHSA,” Cacchione said. “She was a mover and shaker and a major force for moving the organization forward.”

IHSA Director Emeritus and founder of the State University of New York at Stony Brook Equestrian Team, George Lukemire was Blumenthal’s predecessor in the IHSA treasurer role. He credits her with making everything function seamlessly as the organization grew.

“She’s got to be one of the busiest people I’ve known,” Lukemire said. “We were pretty close through the years and I really appreciated her. She was the basic foundation of the IHSA. I had so much respect for her.”

“She was indispensable,” added Tom Bishop, IHSA director emeritus, former national steward and founder, with his wife Claiborne Bishop, of the University of Virginia Equestrian Team. “She was independent and she worked her fingers to the bone. I have no idea how she did it.”

Blumenthal was active in governance at the United States Hunter Jumper Association (USHJA), where she served on multiple committees. She was a US Equestrian licensed R-rated judge in hunters and hunter seat equitation and a steward and often officiated at shows across the nation. Blumenthal also devoted time to the Professional Horsemen’s Association (PHA), serving as national president and the Syracuse chapter’s chair.

Blumenthal dedicated her life to horses and equestrian competition. After graduating from Syracuse University, she taught public school and ran a boarding barn in Oran, New York. It was one of the few facilities in the area with an indoor arena and she began holding horse shows during the winter months, an introduction to her successful career as a show manager.

The 17-day, multi-discipline New York State Fair Horse Show was expertly managed for many years by Blumenthal. The show was a highlight of the Syracuse fairgrounds and it included one of the largest draft horse shows in the nation. She also introduced thousands of fair-goers to horses with her World of Horses tent, a popular breed and educational exhibit.

Blumenthal was the mastermind behind the development of the first Apple-compatible show management software. When Apple heard about what she and a developer had built, they flew her to their headquarters to demonstrate their breakthrough software.

“Naomi embodied the spirit of the IHSA in her commitment to student-athletes from her time as a coach to the legacy she helped build as part of the organization’s Executive Committee,” said Vanessa Bartsch, IHSA board member and head coach of the Stanford University Equestrian Team. “She was generous with her time and did so much to ensure that the IHSA flourished, from helming the National Finals to advising each new team through their first years. She was deeply rooted in the organization’s history through her decades of service and an advocate for the evolution of change, making her an inspiration to the next generation of coaches and riders. She will be deeply missed.”

Blumenthal is survived by her daughter Shari Schneider, from Scarsdale, New York, son-in-law Corey Schneider and their three sons, Cooper, Riley, and Corey, and her sister Elaine Pinsky Bluman (David) and many nieces and nephews. She is preceded in death by brothers Roy and Phillip Pinsky and her parents Norm and Rose Pinsky.

Donations in Naomi Blumenthal’s name can be made to the Intercollegiate Equestrian Foundation (IEF), an organization awarding multiple scholarships each year to deserving students. For more information, contact Kelly Francfort at ief.kfrancfort@gmail.com.